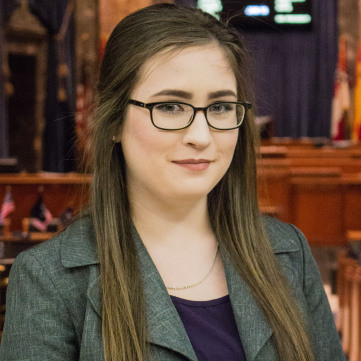 Baton Rouge, LA – LSU Manship School of Mass Communication Senior Natalie Anderson is one of 35 students chosen from 18 universities around the world to participate in the prestigious Carnegie-Knight News21 multimedia reporting initiative, which will investigate federal disaster relief. The Coushatta, Louisiana native will travel to Tempe, Arizona, this summer to research and report for the program. This is the fifth consecutive year that a Manship School student has been selected for the elite News21 Fellowship.

The 10-week News21 program was established by the Carnegie Corporation of New York and the John S. and James L. Knight Foundation to demonstrate that college journalism students can produce innovative, in-depth multimedia projects on a national scale.

Anderson currently serves as editor-in-chief at The Daily Reveille, LSU’s student newspaper, and worked in several reporting and management roles at The Daily Reveille before transitioning to the role of editor. She has covered in-depth political stories as part of the Manship School’s Statehouse Bureau, and has reported for both The Advocate and The Natchitoches Times. Anderson also interned for The Desert Sun in Palm Springs, California in the summer of 2018.

"Natalie has taken advantage of every opportunity that the Manship School offers to build her skills," Manship School professional-in-residence Christopher Drew said. He directs the school's experiential journalism program. "Besides working her way up to run The Daily Reveille, she has covered the Capitol for the school's Statehouse Bureau and had great internships at newspapers. We're not surprised that the News21 program snapped her up."

All News21 students are participating in a spring semester seminar in which they are conducting research, interviewing experts and beginning their reporting. This year students will research and report on how the federal government has handled natural disasters, ranging from hurricanes to wildfires, over the past several decades.

Over the past nine years, Carnegie-Knight News21 projects have included investigations into U.S.-based hate crimes, voting rights, post-9/11 veterans, marijuana laws and guns in America, among other topics. The projects have won numerous awards, including four EPPY Awards from Editor & Publisher magazine, the Student Edward R. Murrow Award for video excellence, and a host of honors from the Society of Professional Journalists and the Hearst Awards Program, considered the Pulitzer Prizes of collegiate journalism.