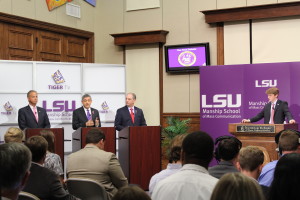 Panelists asked questions that related to the budget, Medicaid expansion, transportation funding, and student interests among other topics.

The candidates in attendance mostly stuck to the issues in the hour-long student-organized and run debate. Angelle claimed he was the most pro-TOPS candidate. Dardenne stated that he’ll have office hours in cities around the state to be more available for the people. Edwards expressed a desire to raise the minimum wage and promote equal pay for women.

Manship student Mitch Rabalais, along with Michael Marsh from WBRZ, Jim Hummel from KATC, Jeff Beimfohr and Natalie Shepherd from WWL moderated the debate. Rabalais said this after the debate,

“This is the first time that Tiger TV, a student run media organization, has done something of this caliber and I can confidently say that we avoided the politics and gave the Louisiana people what they need to know when voting this Saturday.”
The debate was broadcasted in Baton Rouge, New Orleans, Lafayette and Shreveport. It was also streamed live online on tigertv.tv.

Click the links below for recaps of the gubernatorial debate:

The Gubernatorial Debate: Expectations vs Reality