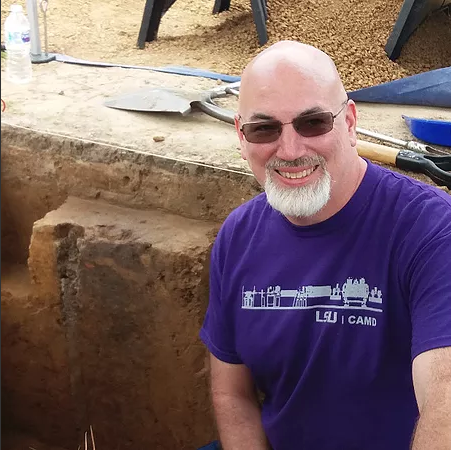 Dwayne Hinton’s pursuit of knowledge surpasses any one discipline. This is why he’ll be graduating in December with three bachelor’s degrees.

Dwayne served eight years in the US Air Force after high school and wasn’t planning to go to college. He worked a variety of jobs, including reserve police officer, and didn’t feel the need to have a degree. His stepdaughters, who he was raising to challenge ideas and always ask why, were the catalyst to pursue higher education.

“Samantha was 10 or 11 at the time, and started asking me why I hadn't gotten a degree if college is so important,” Dwayne says. “I decided I should set an example.”

Not quite ready to take the leap to LSU after being out of school for so long, he chose to enroll at Baton Rouge Community College (BRCC) in 2015 without any specific goal in mind. He transferred to LSU in 2017 with two associate degrees, one for social sciences and one for biology.

He had heard about the Distinguished Communicator program while in the Bridges to Baccalaureate program at BRCC, and signed up when he entered LSU to refine his communication skills. Being in the Air Force had made him comfortable in a leadership position, but tailoring his message to different audiences was a skill he still wanted to develop. What he didn’t expect was the value Communication-Intensive courses added to his learning experience.

“I get very little, if anything, out of exams, but if I have to do a report of some kind, some kind of paper or something, I'm interacting with the material. I remember it a lot longer, and I get something out of the class,” Dwayne says. “For each of the C-I classes I would do this in, I would get that extra knowledge and absorb knowledge better.”

While his initial plan was to use his transfer credits from BRCC to pursue interdisciplinary studies, he was enjoying taking advantage of the different courses LSU had to offer and exploring every discipline that piqued his interest. Then he began working in on-campus labs.

“I saw that if I actually took a couple more classes for anthropology, I could get involved in lots of archaeological research,” he says. Through his lab work, courses, and the Distinguished Communicator program, he developed relationships with his professors and seized opportunities to participate in projects, like scanning artifacts with Dr. Heather McKillop or excavating the Indian Mounds with Dr. Rebecca Saunders. In both Summer and Fall 2019, he was awarded research grants from LSU Discover.

It was his study of science that segued into his decision to pursue journalism for his third degree. He had noticed how reporters lacking a scientific background would misinterpret research, changing the meaning or just completely getting it wrong. The Manship School of Mass Communication no longer offered scientific journalism as a concentration, but that didn’t deter him from his desire to gain those foundational tools to help better express these complex concepts to laypeople.

“If I want to communicate my ideas to people, I need to be able to be brief and I need to be able to translate these big scientific ideas to where anyone could understand,” Dwayne says. “Journalism gave me a way to focus on shorter paragraphs, shorter words, and yet get the same meaning across.”

Though he has taken seemingly disparate path, all of his academic decisions have the throughline of studying humanity. Whether it’s setting an example for the next generation or participating in and communicating about valuable research that will aid future anthropologists, Dwayne is focused on continuing to diversify his range of knowledge.

“In school, we have delineations and different disciplines, but the world is interdisciplinary,” he says. “If you take a bit here and a bit there, you might not be the world's expert on this one topic, but you will be able to handle more and need less outside help. And it's that holistic view that just seems smarter to me.”

Dwayne Hinton will graduate as an LSU Distinguished Communicator in December 2019 with three degrees, Anthropology; Interdisciplinary Studies with focuses in Geographic Information Systems, Psychology, and Sociology; and Mass Communication with a concentration in Journalism. In addition to being a Distinguished Communicator medalist, he is also an LSU Distinguished Undergraduate Researcher, a McNair Scholar, and will graduate with the Ogden Honors College. He plans to pursue a master's at LSU in Anthropology.