Comparative Literature at Louisiana State University is an interdisciplinary program that encourages students to approach literary studies from multiple perspectives.

The Ph.D. program is built around a core curriculum grounded in the history of literary criticism and theory. With the guidance of faculty, students develop their own degree plans and research agendas, meant to combine the study of literature, literary theory, language, philosophy, art, history, and other cultural phenomena in exciting, fruitful, and innovative ways.

As an interdepartmental program, Comparative Literature draws upon the strengths of its affiliated departments:

The Department of English boasts a celebrated literary history extending back to the 1930s and the founding of the Southern Review by Robert Penn Warren and Cleanth Brooks. Today the department is home to a distinguished faculty that includes many nationally-recognized critics, scholars, and creative writers.

The Department of Foreign Languages and Literatures, with graduate faculty in German, Greek, Latin, Italian, Spanish, Arabic, and Chinese, represents a broad spectrum of research interests, from classical antiquity to contemporary Latin American literature. It has also established a Resource Center for Languages, Literatures, and Cultures through the acquisition of videos, films, and printed materials.

The Department of French Studies has long been acknowledged as one of the premier programs in the country. The most recent National Research Council assessment (1995, 2010) ranked the LSU French program among the best in the nation in terms of instructional excellence and faculty strength. The program’s work reflects the historical importance of Francophone languages and cultures for Louisiana, as well as the leadership provided by French studies in the European intellectual tradition.

The Department of History is one of the nation’s premier sites for research in Southern history, but it also has excellent faculty members and graduate students working in a host of other fields. In addition to Southern and United States history, it has particular strengths in British history, the Middle Ages and Renaissance studies, and modern European history. It also has faculty members publishing on and teaching the history of the Ancient world, African American history, Latin America, and Africa, as well as South and East Asia.

The Department of Philosophy and Religious Studies offers a wide range of courses covering fundamental philosophical questions, logic, the history of philosophy, and the study of world religions.

The LSU Theatre program attempts to serve its students in a number of ways, providing rigorous training in performance practices, the history and literature of the stage, and in the development of the critical, conceptual, and argumentative skills basic to a liberal arts education. The program aims to prepare its graduates for careers in both professional and educational theatre. The department also recognizes that theatre is no insular art but involves, reflects, and participates in the wider cultural thought and practices of our time. The program thus encourages a global view of performance; training in production skills should foster an awareness of the intellectual and political life of the contemporary world. We hold that our endeavor in theatre – both in performance and in scholarship – can assume an active role in the cultural dialogue, offering not simply entertainment, but insight and commentary regarding how we determine and pursue our social values and visions.

The Program in Women’s and Gender Studies examines the multiple roles gender plays in everyday life, the impacts of gendered practices on social, cultural, and political behavior and thought, and the intersections of gender, race, sexuality, ability, age, and class.

Many professors and students affiliated with the Program in Comparative Literature have been recognized and have received awards for their research and teaching.

In 1999 the English and French Studies departments were selected as two of the twelve strongest LSU departments; these departments have been earmarked for special enhancement. Major institutional resources are now being shifted to these departments to build academic excellence at levels that will be even more nationally and internationally competitive. More recently, the Department of History has been added to that group. The Program in Comparative Literature is proud that several of its affiliated departments were selected for enhancement from among so many strong programs at LSU.

Students may pursue a graduate minor in any of these fields and are encouraged to do so.

To learn more about the field of Comparative Literature please visit acla.org/about

Comparative Woman aims to create an environment that explores topics related to comparative literature and women/gender studies through poetry and academic essays from a multitude of perspectives. We seek to give poets a platform for reflecting on their thoughts and experiences according to each issue’s theme to present our readers with unique, diverse, and thought-provoking art while also exposing our readers to scholarly work on art created by women or about women in mediums both in and outside of the Western Literary Canon. 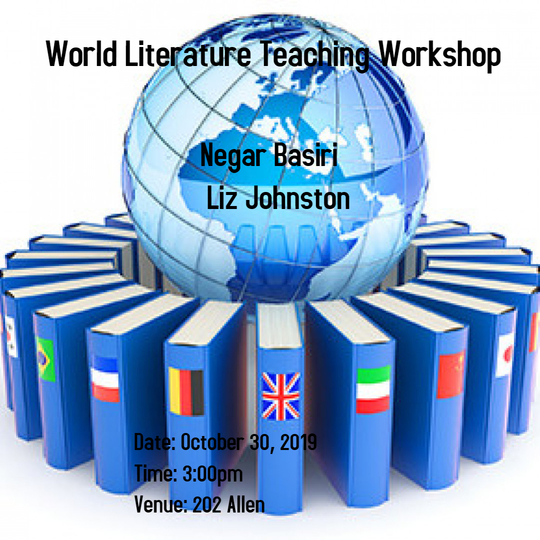 Rebellion and Disobedience at the Ecole Des Beaux-Arts

The Collapse of East Germany, the Fall of the Berlin Wall, and Why They Matter to US Today
Dr. Stephen Brockmann
Carnegie Mellon University

Past Events Sponsored by the Program