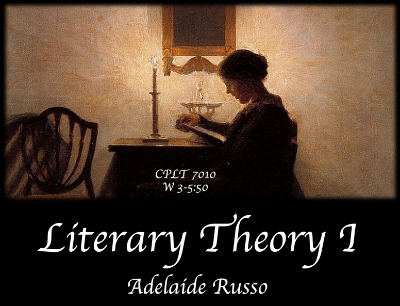 Comparative Literature 7010 provides students with training in bibliography and documentation
as they address the foundations of European Literary Theory and Criticism from Antiquity to the
Romantic Period. Readings include: from Antiquity: Plato, Aristotle, Horace, Longinus,
Quintilian, Plotinus; Medieval: Augustine of Hippo, Moses Maimonides, Thomas Aquinas,
Dante, Boccaccio; Christine de Pisan; Renaissance: Joachim Du Bellay, Sir Philip Sidney; Neo-
Classicism to the Enlightenment: Pierre Corneille, John Dryden, Giambattista Vico, Kant,
Hume, Edmund Burke, Lessing, Hegel, Madame de Staël, Mary Wollstonecroft; Romantic
Period: Wordsworth, Coleridge, Schlegel, Shelley; and Emerson. Students will become aware of
the evolution of literary genres, of the role of literature and authors in society, the relationship of
philosophy and religious thought to literature, and the relationship of poetry to the other arts.
They will explore the notions of mimesis, irony, the sublime, and the role of the imagination as
well as becoming familiar with basic rhetorical figures and argumentative strategies. Students
will be required to prepare an annotated bibliography, 5 to 7 discussion questions and a ten
minute (maximum) oral class presentation of two texts, and a 15- to 20-page final research paper.
Students will work in pairs for the bibliography and the class presentations of the readings. The
written versions of the presentations and the bibliography are due the week following the oral
presentations. Required Text: Williams, Leitch, Cain, Finke, Johnson, McGowan, The Norton
Anthology of Theory and Criticism, 3rd Edition. Additional Xeroxed materials will be provided.
Contact Adelaide Russo at frruss@lsu.edu for further information. 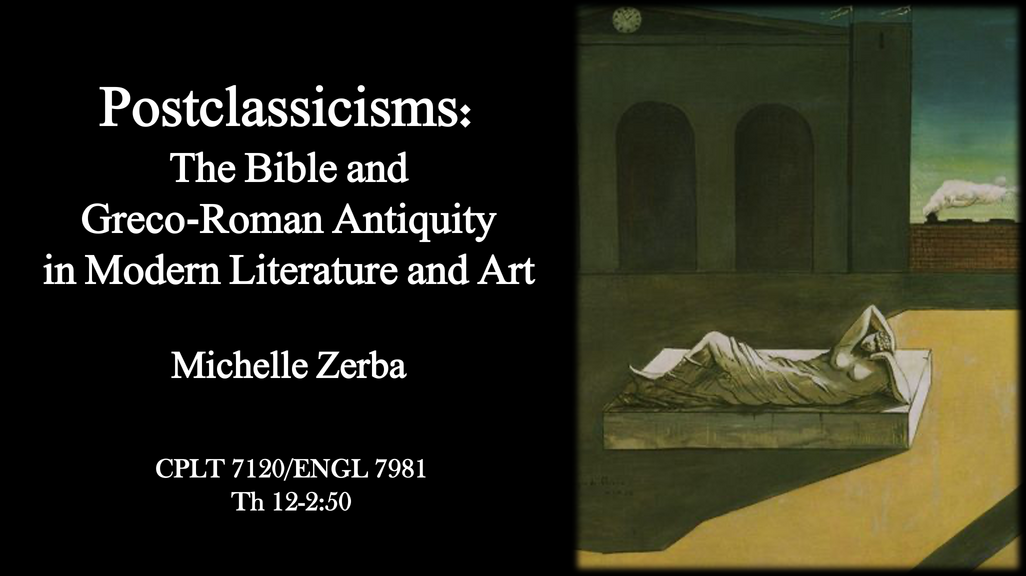 CPLT 7120: Postclassicisms: The Bible and Greco-Roman Antiquity in Modern Literature and Art

This course explores the ways in which (early) modern writers and artists draw on Greek and Roman antiquity and the Bible for creative inspiration even as they question its influence and viability. How have “the classics” been constructed, as a critical paradigm, as a resource of the imagination, and as a hegemonic legacy that must be resisted? What values are associated with returns to the ancient worlds of Greece, Rome, and the Bible? We will investigate these questions by examining how figures such as T.S. Eliot, Italo Calvino, Vladimir Nabokov, and Anne Carson approach questions of translation, reception, and adaptation. In addition, we will examine some of the literary tools we use for referencing the classical past, including “genre,” “allusion,” “shadow texts,” and “parody.” Most of the class will focus on studying paired works that enable a better understanding of what “postclassicism” means in relation to modernity and modernism:

· Genesis and Mark Twain’s Diaries of Adam and Eve

· Ovid’s Metamorphoses (selections) and Ovid Metamorphosed (a collection of contemporary stories by A.S. Byatt, Margaret Atwood, and others based on Ovid)

· Poetry of Sappho, Pound & H.D.’s Imagism, and Anne Carson’s If Not, Winter

· Greek Mythical Females and the Art & Poetry of the Pre-Raphaelites 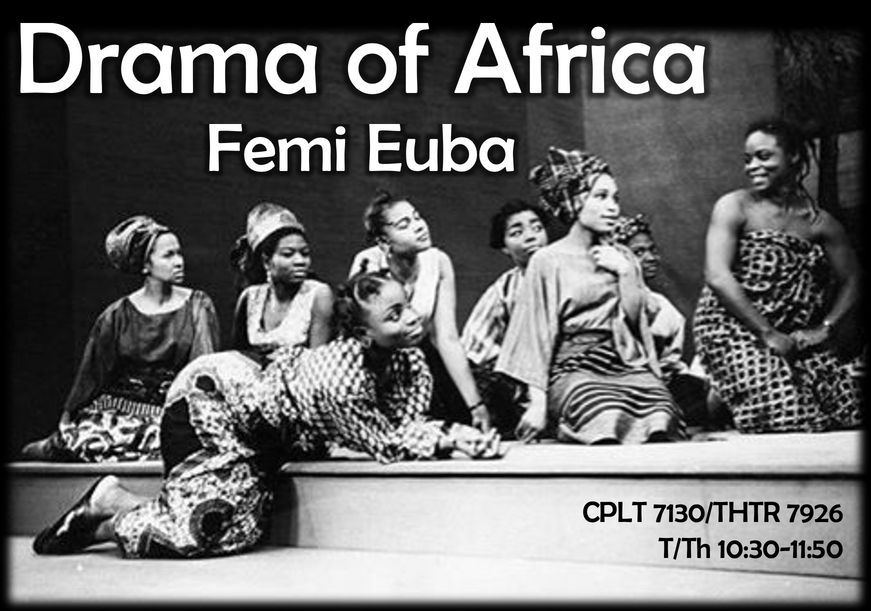 A comparative study of the dramatic and theatrical expressions of the black cultures in Africa, identifying, where possible, not only African influences on some of the dramatic works in the diaspora, but also the Western classical influences on African plays. Works include those by Wole Soyinka, Ngugi wa Thiong’o, Efua Sutherland, Ama Ata Aidoo, Athol Fugard et al, Tewfik al-Hakim, etc. 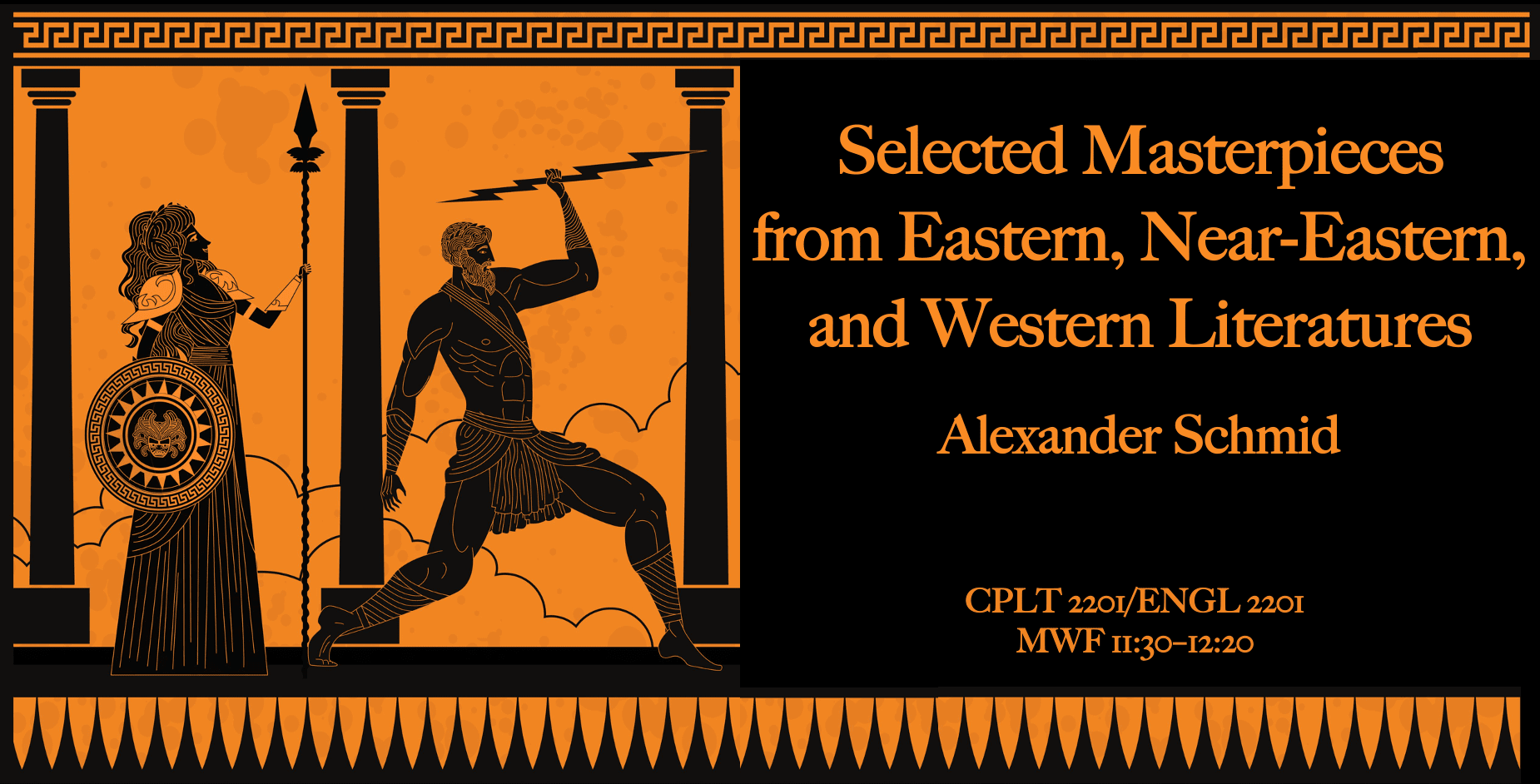 Join me on an epic quest through several masterpieces of Western and Near-Eastern Literature.

This Fall, we will begin our exploration in the cradle of civilization with Gilgamesh and Enkidu. We will then proceed through Archaic Greece on an Odyssey with Homer to the isle of Lesbos to visit the poet Sappho. From those high seas, we will make the narrow crossing across the Ionian Sea to visit Rome, and there we will learn from Virgil's Aeneid the epic roots of the Roman Empire. From Rome, we will venture still west to the land of King Arthur, and there we will encounter the tale of Beowulf and the terrible Grendel. From the lonely island, we will voyage to Murasaki Shikibu’s 11th century Japan, and selections from her The Tale of Genji. We then sojourn back west to Syria, and there we will encounter Scheherazade and her Thousand and One Nights. We will conclude with short selections from four final masterpieces: Dante’s Divine Comedy, Christine de Pizan’s The Book of the City of Ladies, Chaucer’s The Knight’s Tale (from The Canterbury Tales), and John Milton’s Paradise Lost. 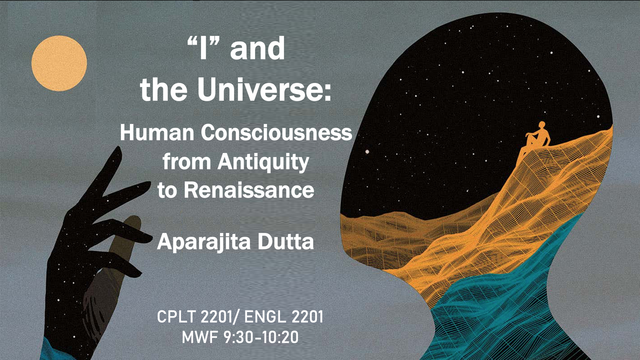 CPLT 2201/ENGL 2201 (Section 002): Introduction to World Literary Traditions: "I" and the Universe: Human Consciousness from Antiquity to Renaissance

From the concepts of “Shabda Brahma”—or the power of the word (Devisukta, Rig Veda)—to the turbulence of religion, our consciousness has evolved in multifarious ways since ancient times, manifesting in literature from all over the world. This plethora of creativity ranges from the great epics to tales written during plagues. The course surveys different ways human beings look at the world, expressing their identities and their emotions. While reading individual texts critically and analytically, we will also follow a comparative methodology by traveling across the whole world, taking a sip of wisdom from the Vedas, sailing with Gilgamesh through the shores of Mesopotamia, and reliving the floods of Noah’s ark. We will then move forward to medieval times, witnessing a harmonious religious conglomeration of Sufi and Bhakti poets of South Asia, of Rumi, and experiencing the chivalrous tales of the west. The tales of Arabian Nights and plague tales of The Decameron will sail us through the end of the medieval era, and we will be a witness to the rationalism of Renaissance. To offer more depth to our understanding, we will also spend a little time analyzing the contemporary references and reception of these texts. The primary questions we will be keeping in mind throughout the course will be:

· How is the human located in the text?

· How is the human consciousness reflected in the text?

· Comparative analyses of the texts

Texts: All texts will be provided by the instructor. 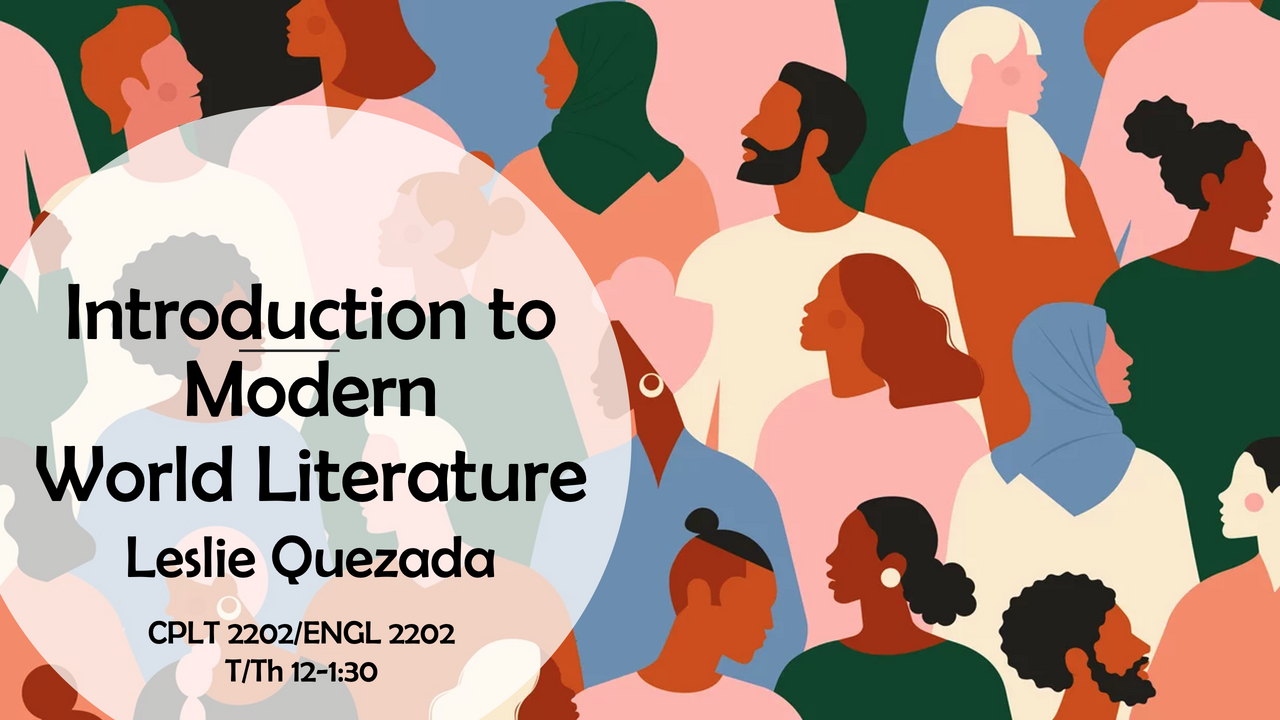 This course focuses on representative works of modern and contemporary world literature by authors such as Henrik Ibsen, Gustave Flaubert, Federico García Lorca, Lois Lowry, and Indra Sinha. From Like Water for Chocolate to The Kite Runner, we will investigate representations of identity and culture through a central theme of nationalism, which will help guide our reading and analysis. The goal of this course is to introduce students to cultural diversity in a variety of literary traditions and genres, including ​novels, short-stories, film, poetry, and semi-autobiographical fiction. This course will also introduce foundational concepts and theories of world literature as an exciting field of study. 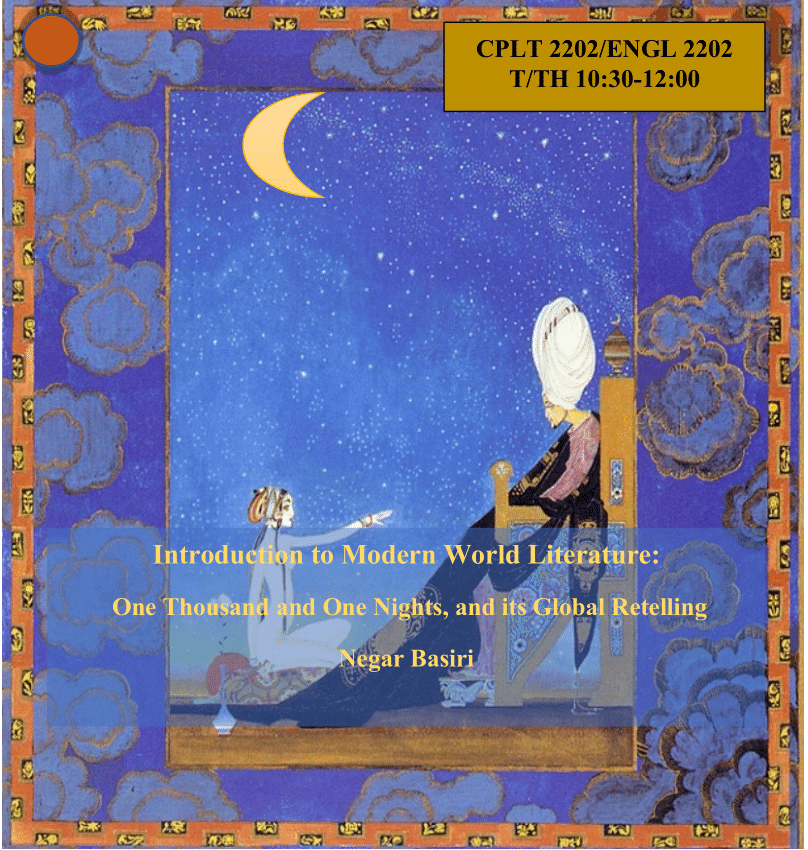 CPLT 2202/ENGL 2202 (Section 002): Introduction to Modern World Literature: One Thousand and One Nights and its Global Retelling

With this simple sentence, Borges pays tribute to the enduring impact of The Arabian Nights in shaping world literature. An unparalleled monument to the ageless art of storytelling, the tales of the One Thousand and One Nights have, for many centuries, titillated the imaginations of generations the world over. It is perhaps one of the greatest Middle Eastern contributions to world literature. In various forms and genres, it has influenced literature, music, art, and cinema, and continue to do so until our present day. Whether through its folktales, its magical stories full of adventure, or through its modern depictions as Hollywood feature films or Disney animated movies, almost everyone has been influenced to some extent by at least one or another of Shahrazad’s dazzling stories of the exotic East. Indeed, one would be hard-pressed to find anyone not familiar with the stories of Aladdin, Ali Baba, or Sindbad among many others, or with such terms as genie and ghoul, all of which became known to the West through the tales of One Thousand and One Nights.

In this course, we will read, watch, and listen to modern literary texts from around the world that directly reflect their reception of this classic text. The underlying preoccupation of this course is to examine narrative transformations of stories across historical and geographical barriers, addressing questions such as how do stories change in their travel from one culture to another, from one era to another and from one medium to another?