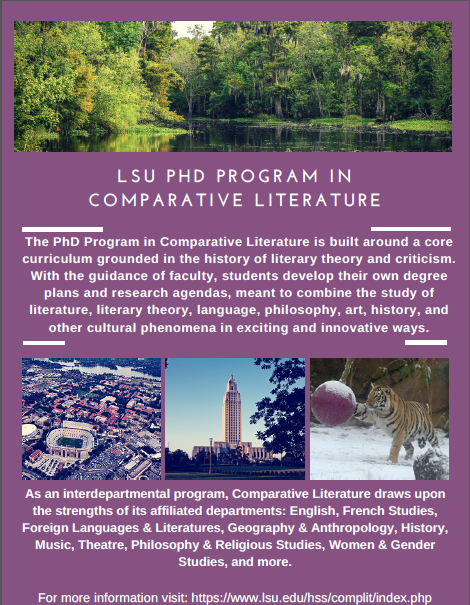 The PhD program in Comparative Literature is built around a core curriculum grounded in the history of literary theory and criticism. With the guidance of faculty, students develop their own degree plans and research agendas, meant to combine the study of literature, literary theory, language, philosophy, art, history, and other cultural phenomena in exciting and innovative ways.

Prospective applicants are strongly encouraged to contact the interim program director for information and assistance. The interim program director is Dr. Dorota Heneghan, and she can be contacted at cplt@lsu.edu. To apply all prospective students must use the online application form found on the LSU Graduate School website. The following link will lead you to the application portal gradapply.lsu.edu. To be considered for financial assistance, teaching assistantships, and research assistantships, applications must be received by January 15th.

An undergraduate major in language or literature is the normal prerequisite for graduate work in Comparative Literature. The undergraduate major should consist of not fewer than thirty semester hours in the major field. Applicants lacking this minimum, if accepted, may be required to add to their program of study a number of undergraduate hours in language and/or literature up to the difference between their undergraduate total of literature courses and the acceptable minimum. These courses will count toward a full academic load but will not count for graduate degree credit. Many students in the program have already received an M.A. in a national language and literature. Students accepted with the B.A. may obtain an M.A. at LSU in English, French Studies, Hispanic Studies, or Philosophy and Religious Studies. Students accepted in the MFA program in Creative Writing at LSU who have competency in the requisite number of foreign languages can pursue a Ph.D. in Comparative Literature by completing the required courses for the degree.

Applicants meeting the following requirements are normally granted regular admission. Applicants failing to meet all requirements may be granted probationary admission, provided other substantial evidence of capacity to do satisfactory graduate work—including outstanding performance in postbaccalaureate and/or graduate work and other outstanding achievements—is presented.

Applicants with unsatisfactory undergraduate records who have completed a minimum of nine hours of graded graduate course work with at least a 3.33 graduate grade point average (GPA) (“A” = 4.0) in a graduate program will be considered for admission. Applicants who appear admissible on the basis of unofficial and/or incomplete transcripts of previous work or unofficial test scores, but who are unable to supply the required records prior to registration, may be granted provisional admission. Subsequent enrollment will not be permitted until all provisions are met. Provisional admission does not guarantee subsequent regular admission to the Graduate School.

Regular admission is awarded to applicants who intend to pursue a doctoral degree (Ph.D.) and meet the following requirements:

Applicants who fail to meet one or more of the requirements for regular admission may be admitted on probation, provided additional evidence of capacity to do satisfactory work is presented. Such evidence might include superior performance in a substantial amount of postbaccalaureate work,  and other achievements. Students entering on probation will remain on probation until the completion of nine hours of graduate-level, graded courses (“A,” “B,” and “C” only) with at least a 3.00 average. Part-time students entering on probation and registering for fewer than nine hours may be dropped from the Graduate School if their GPA is less than 3.00 during any semester in which they are registered. Students admitted on probation may not be appointed to assistantships or fellowships until they attain good academic standing.

Applicants who have completed degree requirements outside the U.S. must present all of the following:

Application deadlines for international students are the same as for all other applicants; however, because transcripts from foreign universities require special evaluation, prospective international students should begin the application process at least nine to twelve months prior to the semester in which they plan to enroll. Applications received after the deadline dates will be processed for the following semester or summer term. When sufficient scholastic records and acceptable evidence of English proficiency are not received early enough to determine admissibility for the semester for which application is made, consideration for a subsequent semester will be made only upon the applicant’s written request.

Upon arrival on campus and before registration, international applicants (except citizens of Canada, Australia, New Zealand, Ireland, the United Kingdom, certain Caribbean islands, and Belize) who have been admitted to the Graduate School must take the LSU Comprehensive English Language Test, consisting of the Michigan Test and a writing sample. Students whose tests indicate a deficiency in English will be required to register for appropriate English composition courses with a reduced load of graduate courses.

All international graduate students awarded graduate assistantships must demonstrate proficiency in English by examination or enroll in a spoken American English course during the first semester of the assistantship. This course will result in a recommendation (or non-recommendation) to assume teaching duties. Any international teaching assistant who has not received a favorable recommendation from this speech course may not teach in any capacity. An international applicant who has completed an undergraduate degree at an accredited U.S. institution must meet regular admission requirements. An international applicant will not be admitted until this information has been received.

An “Application for Admission to Graduate Degree Program” packet may be obtained from the Graduate School or from the graduate department to which application is being made. All applications for graduate admission must be accompanied by a nonrefundable application fee (check or money order drawn on a U.S. bank and made payable to LSU).

The application fee is $50US for U.S. citizens and permanent residents and $70US for all other applications. Do not send cash through the mail.

A late fee of $25 must be paid if the application is postmarked after the following dates: May 1 for intersession, May 15 for the fall semester, October 15 for the spring semester, and May 15 for the summer term. International applications received after these dates will be processed for the following semester and no late fee will be assessed. Fall applications must be received before the January 15 priority date in order to receive full consideration for assistantships, fellowships, or scholarships for which the applicant has applied.

International applicants are encouraged to determine course availability before applying for summer entry, and they are further encouraged to apply at least nine months in advance of their intended semester of enrollment. Applicants for graduate admission should proceed as follows:

Applicants must submit their forms electronically. Link of the admission portal is : gradapply.lsu.edu. Forms can be accessed directly from the Graduate School website. Applicants are responsible for submitting the following items to the Graduate School, 114 David Boyd Hall, LSU, Baton Rouge, Louisiana 70803:

The following materials must be submitted to the department the student wishes to enter. Please send them to Director and Graduate Advisor, Program in Comparative Literature, Louisiana State University, Baton Rouge, Louisiana 70803.

Applicants must be responsible for submitting writing samples in both their primary language and in English to the program. Preferably, the writing samples should be in the form of a critical essay. Admission is for the semester requested. Those admitted who do not register must make a written request to be reconsidered for admission for a subsequent semester. Request for a delay of admission will only be considered for two subsequent semesters from the original application semester. A new application is required for a delay of more than two semesters from the original semester of application (summer included). The Graduate School will not consider for admission any nonimmigrant who has entered the U.S. on an I-20 issued by another institution until that person has been enrolled for at least one semester at the institution issuing the I-20.

Admission to the program is determined on the basis of information gathered from all of the sources mentioned above under “Procedure.” In addition, a personal interview, if feasible, is highly recommended. Internal applicants to the Ph.D. program from LSU M.A. programs are evaluated in largely the same way as outside applicants, with the difference that internal (in place of external) letters of recommendation and performance in the master’s program are taken into account. A judgment on the applicant’s potential for success in graduate study is made on the basis of all the information supplied to program’s selection committee: no single factor is decisive.

Because of its commitment to teacher training and to undergraduate education, the program requires new teaching assistants to undertake appropriate training and carefully supervises their work in the classroom. Renewal of assistantships is contingent on satisfactory performance of assigned duties and on satisfactory progress toward the degree. “Satisfactory progress towards the degree” requires at least a grade point average of 3.0 and the completion of nine hours of graduate credit in each fall and spring semester. In addition, students must follow the procedures necessary to convene a graduate committee and must select a major professor during their first year of enrollment in the program. If teaching in the summer, an assistant must complete six hours during that summer. Students may hold assistantships for up to four years in the Ph.D. program. These figures are cumulative.

Board of Regents Fellowship

In the past outstanding applicants for admission to the Louisiana State University Ph.D. Program in Comparative Literature could be nominated to compete for Board of Regents Graduate Fellowships. Recipients receive a stipend of $18,000 per year for four years plus a full tuition waver. The stipend was distributed on a 12-month basis; students holding the fellowship were required to enroll for 6 credit hours during the summer term. Successful applicants will be expected to have GRE scores of 1250 (324) or higher and a GPA of 3.5 or higher. However, there will be some flexibility to consider applicants who may not meet one of these requirements but who demonstrate excellence in various other ways. Recipients must be American citizens or resident aliens holding permanent visa status. This program is not available for the 2015-2016 Academic year.