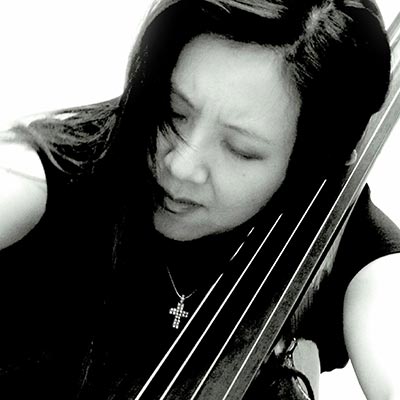 The Strad Magazine, review of the "Butterfly Lovers Violin Concerto" CD (February 2009) “The disc provides a searching examination of her formidable technique…she is uniquely gifted and [a] brilliant exponent of the instrument.”

Taiwanese American bassist Yung-chiao Wei made her Carnegie Hall debut in 2003. Her performance garnered tremendous praise from New York Concert Review Inc. Critic Anthony Aibel, who hailed, “Wei is phenomenal.” Her performance of Schubert’s Arpeggione Sonata in A minor elicited another mention of praise: Aibel affirmed that “nuance on the double bass is hard to accomplish, but Wei plays with subtlety of dynamics, color and expression one seldom, if ever, hears on the bass.”

As a bassist with unusual physical disadvantages: having hands that have thumbs and little fingers half the size of those found on normal hands, Wei was able to overcome these physical challenges and established a distinguished career as both a performer and an educator. She has performed at major concert halls, prestigious summer festivals, and has given master classes and recitals at major music schools on four continents. She has concertized with the National Symphony Orchestra in Taiwan, New World Symphony (FL), Formosa Philharmonic, and Louisiana Sinfonietta. She has also performed and gave master classes at Opera Bastille in Paris, Eastman School of Music, New England Conservatory, Boston University, Berlin University of the Arts, Academy of Performing Arts in Prague, Japan Double Bass seminar, Montreal Chamber Music Festival, Taipei University of the Arts, Central Conservatory of Music in Beijing, and Shanghai Conservatory, among many.

Wei is a recipient of numerous honors, including the prestigious Awards to Louisiana Artists and Scholars Grant, LSU Tiger Athlete Foundation Teaching Award, Taiwan Young Concert Artists’ Competition, and both the 2nd Prize and Audience prize in the First Izuminomori International Double Bass/Cello Competition in Japan, among others. As a chamber musician, Wei has collaborated with artists such as Leon Fleisher, James Buswell, and James Ehnes. She has served as principal bassist in the New World Symphony Orchestra, the New York String Orchestra at Carnegie Hall, and the Metamorphosen Chamber Orchestra in Boston. A frequent adjudicator in major double bass competitions (International Society of Bassist Solo Competition and International Sperger Competition for Double Bass), Wei also enjoys her students’ success in major national and international competitions (National YoungArts, International Society of Bassists, Stulburg International String Competition), orchestra and university positions both in the US and abroad, Grammy nominations, and founding a youth orchestra in Brazil, with the mission of bringing music to the underprivileged.

Currently Professor of Double Bass at LSU, Wei believes in the power of music and that bringing musical performance and education to the community is vital. She has served as the LMTA String Chair, founded the annual Louisiana Bass Festival, and served as its executive and artistic director since 2010. With the goal of sharing and connecting passionate bassists around the world, she has collaborated with the Interlochen Center for the Arts and Master Players Festival, and commissioned bass quartets for the Louisiana Bass Festival. Due to COVID-19, the 2021 Louisiana Bass Festival turned virtual, and raised over $42000 in competition and scholarship prizes, one of which included an opportunity to substitute with the Indianapolis Symphony Orchestra. The virtual event attracted over a hundred participants from eighteen countries and had an audience of over 10,000. Most recently, Wei launched an initiative–the Connect2Music Project–that she co-founded with her 18-year-old son, Evan Tsai, by providing a free online peer mentoring program that makes a musical education easily accessible to K-12 students.

Wei received her Master’s degree with honors from the New England Conservatory and Bachelor’s degree with a Performance Certificate from the Eastman School of Music. Her teachers include James Vandemark, Lawrence Wolfe, Stuart Sankey, Jeff Turner, Derek Weller, Peter Dominguez and Claudia Chen. Wei’s recording of the Chinese violin concerto, “Butterfly Lovers,” and the Brahms 1st Cello Sonata is available on Centaur Records. Her transcription of the Elgar Cello Concerto, Brahms 2nd Cello Sonata, and commissioned works by Ming-hsiu Yen and Matthew Tommasini is available on CD Baby, iTunes, Amazon, and Sheet Music Plus.