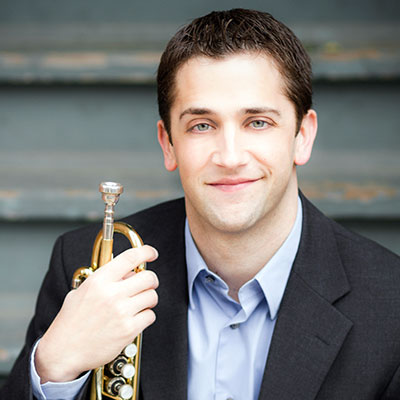 Matthew Vangjel is the Associate Professor of Trumpet at Louisiana State University in Baton Rouge, where he teaches trumpet and coaches chamber music. Previously, he held positions at the University of Texas-San Antonio and the University of Arkansas-Fort Smith. Vangjel is a passionate music educator and frequently spends his free time teaching at camps and studying pedagogy. In the summer, he can be found at LSU’s Stately Oaks Summer Camp and coaching the National Youth Brass Band of America. He also taught at the University of Costa Rica’s brass camp, Foro Bronces 2017, in San Jose.

In addition to his current duties at LSU, Vangjel is an active performer locally and nationally. Currently, he is a member of the Mirari Brass Quintet (Ariel Artists) with whom he maintains an active touring schedule both in the United States and abroad. Recently, Mirari spent two weeks touring China and released its second album, renewed, reused, recycled. Vangjel is also a member of the internationally acclaimed Fountain City Brass Band (FCBB), a British-style brass band based in Kansas City, KS. He can be heard as solo flugelhorn on all of the FCBB albums and as a featured soloist on Over the Rainbow and Celtic Impressions.