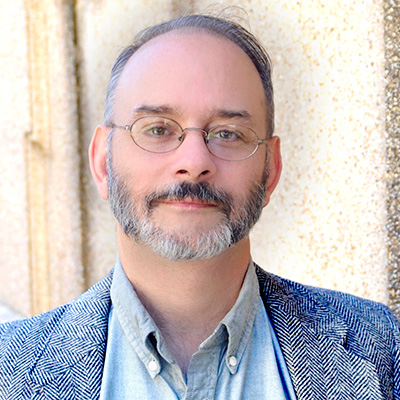 Perry was born in the Berkshire Hills of western Massachusetts and holds degrees from Williams College (B.A. 1982), the California Institute of the Arts (M.F.A. 1984), and Princeton University (Ph.D. 1990). He has taught at LSU since August 1994 and was formerly a member of the music faculty of Duke University (1990-92) and the University of North Carolina at Chapel Hill (1993-94). He was twice chosen as a Fellow of the Mannes Institute for Advanced Studies in Music Theory (2004, 2006).

Recent publications include “’A Quiet Corner Where We Can Talk’: Cage’s Satie, 1948-58” (Contemporary Music Review 33:5-6) and “Cage’s Sonatas and Interludes for Prepared Piano: Performance, Hearing and Analysis” (Music Theory Spectrum 27:1). His essay “Mel Powell and the String Quartet” appears in Intimate Voices: Aspects of Construction and Character in the Twentieth-Century String Quartet, (University of Rochester Press, 2008). His work has also been published in Perspectives of New Music, Journal of Musicology, Nineteenth Century Music, Music Theory Online, Indiana Theory Review, and College Music Symposium. He has presented work at colloquia and conferences in the United Kingdom, Brazil, and Taiwan as well as in the United States and Canada. Teaching interests include 20th century music, American musical experimentalism, Schubert, Schenker, and music/text relations.

In 2017-19 Perry was editor of Music Theory Online, a peer-reviewed journal of the Society for Music Theory. He is a past President of the South Central Society for Music Theory (SCSMT) and has served as coordinator of music theory at LSU, as director of the LSU Festival of Contemporary Music, and as chair of the LSU Faculty Senate Courses and Curriculum Committee. In 2006-9 he served as Reviews Editor of Music Theory Online and has also served that organization as member or chair of the Publications, Nominations, and Program Committees.

He has been a member of the LSU in London and Edinburgh summer program, and currently teaches in both the LSU School of Music and the Ogden Honors College, serving also as an affiliate faculty member in the LSU program in Comparative Literature. An active composer, his recent works have been performed at LSU, the Ohio State University, the University of Connecticut, the State University of Minas Gerais, and elsewhere.