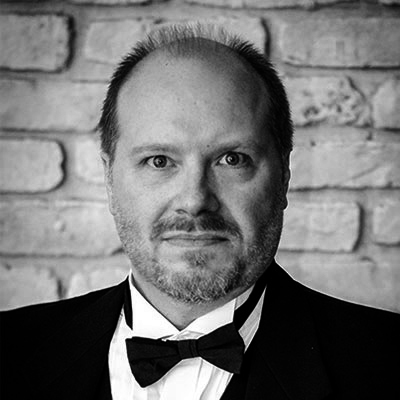 Dennis Jesse (Associate Professor, Voice) has found much success in a wide range of vocal styles and characterizations in a career that has taken him from the madcap world of operetta to the dramatic depths of grand opera. He has appeared in more than 40 operettas including: Desert Song, The Mikado, H.M.S. Pinafore, Gräfin Maritza, Die Fledermaus, and The Merry Widow. His operatic credits include the title roles in Rigoletto, Don Giovanni, Gianni Schicchi, and Il Barbiere di Siviglia, as well as lead baritone roles in I Pagliacci, Madama Butterfly, Faust, Le Nozze di Figaro, Die Zauberflöte, La Boheme, Cavalleria Rusticana, Carmen, Romèo et Juliette, and The Crucible.

“Whenever Dennis Jesse entered, he completely took over the stage as the toreador Escamillo. He showed an excellent and complete grasp of the character and a strong command of the language and nuance of the score.”

“Dennis Jesse drenches Tonio with a rich baritone sound. Jesse’s voice and subtle acting creates a menacing characterization, yet one of genuine pathos.”

“Dennis Jesse’s Giovanni was gentlemanly but menacing, handsome but heartless. He moved well on stage and was especially convincing in such seductive moments as the sensuous”La ci darem la mano” duet. The voice? Compact, solid and nicely gauged for the house, with a pleasantly husky quality. Jesse used his sense of the Italian text and of word accents to make the dramatic moments convincing, rather than overblowing the sound.”

Some of his most recent and upcoming engagements include: Danilo in The Merry Widow with the Nevada Opera, John Brooke in Little Women as a Guest Artist with University of North Carolina Greensboro, Soloist in Carmina Burana with The Burlington Choral Society, Schaunard in La Bohème with the Jacksonville Symphony, Scapria in Tosca with Nevada Opera, Escamillo in Carmen with Opera Idaho, Lord Mountjoy in Gloriana and Shlemil in The Tales of Hoffmann with Des Moines Metro Opera, Enrico in Lucia di Lammamoore with Pensacola Opera and Soloist in Messiah with Johnstown Symphony.

Upcoming recital appearances are with Baton Rouge’s BRAVO organization and on the Saddle Rock Music Series in Denver Colorado.