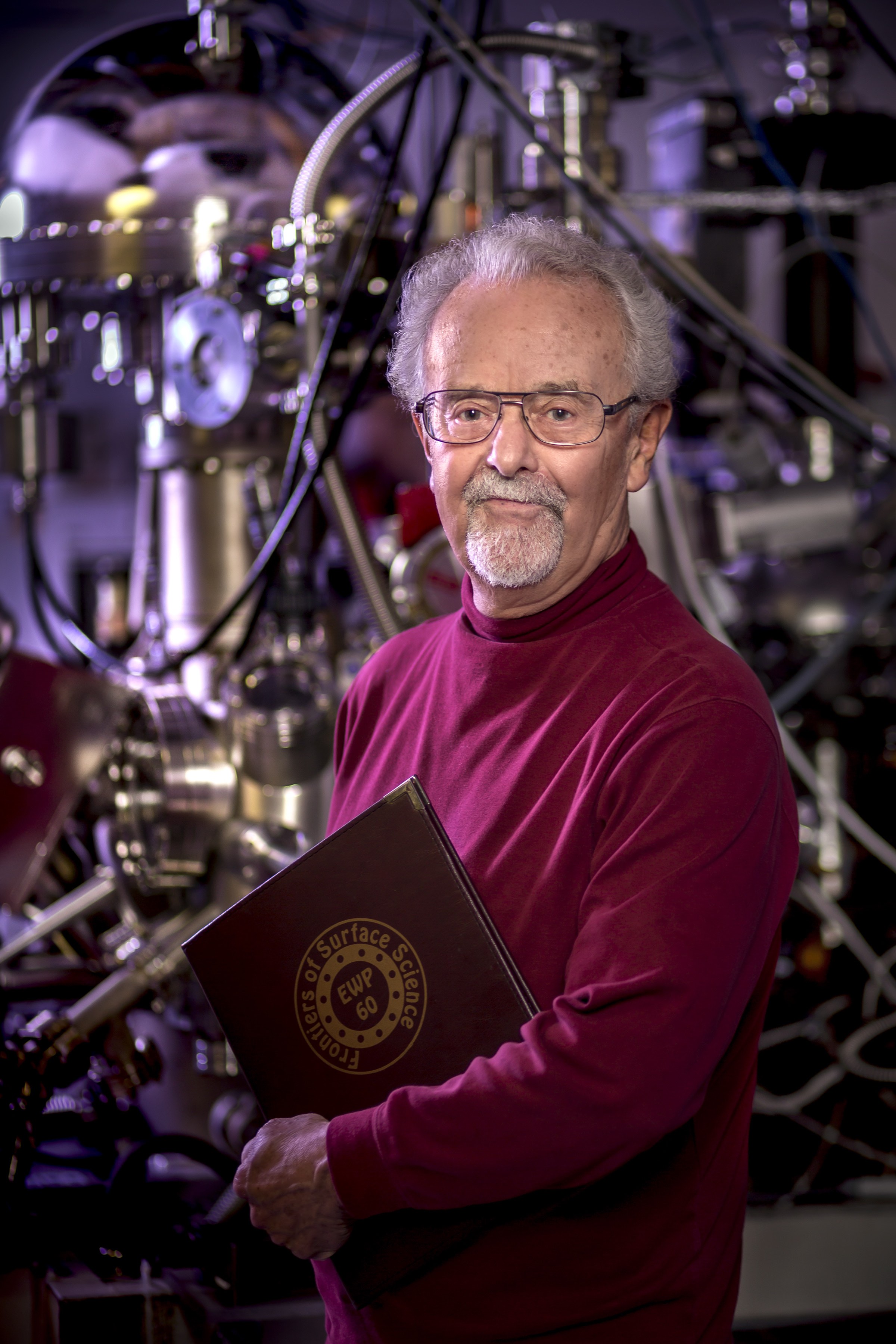 LSU Boyd Professor of Physics and National Academy of Science member Ward Plummer passed away on July 23, 2020. He was 79 years old.

Ward Plummer was a leading scientist in materials physics with a focus on electronic behaviors at surfaces and low dimensionality. He was a recognized pioneer in the observation of surface electronic structures; in the discovery of surface-supported multipole plasmon modes in metals; and in the spectroscopic interrogation of single atoms on surfaces. Much of the condensed matter physics field’s current research on critical phenomena in low-dimensional systems was inspired by his discovery of charge-density waves at the metal/semiconductor interface.

Professor Plummer was an internationally renowned researcher and educator having authored more than 400 scientific articles and mentored more than 100 graduate students and postdoctoral fellows. He accrued many awards and distinctions over his long and illustrious career. A greatly abridged list includes Ward Plummer as a named fellow of the American Physical Society (1981) and the American Vacuum Society (2001); recipient of a Guggenheim Fellowship (1986); recipient of the Medard W. Welch Award from the American Vacuum Society (2001); elected member of the National Academy of Sciences (2006); elected member of the American Academy of Arts and Sciences (2014); and recipient of the International Science and Technology Cooperation Award, which was presented to him by the Chinese president, Xi Jinping (2017).

Plummer actively participated in professional societies, regularly serving on many national and international committees to review existing scientific programs and identify future directions for science and technology. Known for his tenacious pursuit of free and open scientific ideals, Plummer helped build collaborative research and education programs between the U.S. and international partners. In 2009, this led to the creation of a dual degree program between LSU and the Institute of Physics in Beijing, China, as well as jointly funded collaborative efforts to build state-of-the-art instrumentation to probe materials’ surface behaviors.

Born in Astoria, Oregon, Plummer graduated with a B.A. in physics and mathematics from Lewis and Clark College in 1962 and completed his Ph.D. degree in physics at Cornell University in 1967, under the guidance of Thor Rhodin. After completing a National Research Council Postdoctoral Fellowship at the National Institute of Standards and Technology (NIST), he remained as a staff scientist until 1973. During his time at NIST, Plummer was a central part of the team that developed single-electron spectroscopy, which enabled the first-ever glimpse into electronic energy levels of atoms at the surface of a metal. In the fall of 1973, he accepted a position as a faculty member in the Department of Physics and Astronomy at the University of Pennsylvania where he spent the next 19 years. During this time, he rose to the rank of professor and served as director of the Penn Laboratory for Research on the Structure of Matter, while training young scientists and continuing to broaden the application of electron spectroscopy techniques.

In 1993, Plummer moved to Tennessee with a joint appointment as a Distinguished Professor of Physics at the University of Tennessee and as a Distinguished Scientist at Oak Ridge National Laboratory. While in Tennessee, Plummer continued to teach, mentor young scientists, and drive research in new directions. He was instrumental in the conception of the Joint Institute for Advanced Materials at the University of Tennessee and served as its director until his departure in 2009.

Plummer arrived at the LSU campus in Baton Rouge in January 2009. He was named Boyd Professor of Physics in 2017 and served as special assistant to the Vice President of Research & Economic Development. He worked tirelessly to improve research infrastructure in the university system with the clearly stated goal of wanting to produce the next generation of great scientific leaders in Louisiana. This recently culminated in helping to build new clean room facilities and to acquire a high-end transmission electron microscope that will enable researchers and students to access best-in-class instrumentation capable of manipulating functional materials in the pursuit of new technologies and fundamental science.

“Ward Plummer was relentless in his push to drive LSU research forward,” LSU Vice President of Research & Economic Development Samuel J. Bentley said. “As a mentor to many, he patiently coached me in understanding the needs of our faculty to advance materials and quantum research at LSU. It was an honor to write a proposal with him just last month and share the joy of that proposal being funded. Even then, he did not rest, always pushing us to work harder. I will miss his grouchy notes reminding me that my job was not yet done.”

“Ward Plummer was a giant in his field, said Cynthia Peterson, dean of the College of Science at LSU. "He had a tremendous impact on Materials Science — not only at LSU, but nationally and internationally. I admired Ward and appreciated his commitment to excellence. He pushed all of us to do our best science and he will be sorely missed.”

“This is a tremendous loss for science on a global scale,” Jeffery C. Blackmon Russell B. Long Professor and chair of the LSU Department of Physics & Astronomy said. “Ward was not only a visionary scientist, but he was a leader in fostering international collaborations and exchanges. He championed a free exchange of ideas that helped scientific discovery flourish and improved international relations. Ward recruited top talent from around the world to his research programs, and he leaves a great legacy in the careers of many outstanding young scientists that he mentored.”

After more than 50 years as an educator and researcher and all of the accomplishments and awards he received during that time, Plummer always cited his greatest professional pride as being in his work with students. He absolutely delighted in watching their growth as he mentored their progress and development into independent scientists. Plummer leaves behind many friends and colleagues who will miss his energetic passion for mentoring and his uncompromising approach to conducting good science.

“My legacy will be the minds I molded; not the papers I wrote or the prizes I won.”— Ward Plummer

In memory of Ward’s dedication and legacy within the LSU Department of Physics and Astronomy and the many lives he’s impacted, gifts can be made in his name to the "LSU Foundation – P&A development fund," 3796 Nicholson Drive, Baton Rouge, LA 70802. In the memo line, please indicate, “IMO Ward Plummer.”