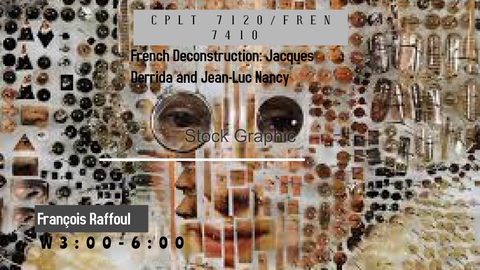 French deconstruction, in particular the work of Jacques Derrida and Jean-Luc Nancy, has had a major impact on the Humanities in the Anglo-American world. It has had a transformative effect on various fields such as literary theory, comparative literature, political theory and historiography, theories of meaning, cultural studies and literary criticism, gender theory and feminism and environmental studies.  We will explore French deconstruction by addressing the following issues:  the senses of deconstruction and “differance”; subjectivity and “touch”; the critique of humanism and the question of animality; ethics and responsibility; death, the secret, and the other; law, forgiveness and hospitality; community and being-with; the world and globalization. Texts will include (for Jacques Derrida): “Differance,” Positions, Point s, Paper Machine, For What Tomorrow…, The Animal that therefore I am, Of Hospitality, Force of Law, On Cosmopolitanism and Forgiveness, On Touching—Jean-Luc Nancy.  From Jean-Luc Nancy, we will read among other essays such texts as “Of Being-in-Common,” Being Singular Plural, Who comes after the Subject?, Justice, Legality and World, The Creation of the World of Globalization, The Truth of Democracy, and Identity. 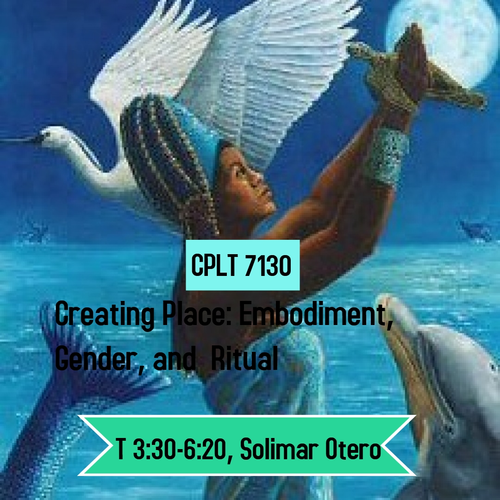 This course explores the relationship between embodiment, gender, and ritual in literary, cinematic, and cultural production in Latin America, the Caribbean, and the African Diaspora.  Of particular focus will be the manner in which form illustrates the connections between ontology and ritual in gendering creativity and place.  Authors and artists explored include Ana Maurine-Lara, Julie Dash, Mayra Santos-Febres, and Edna Brodber, among others. 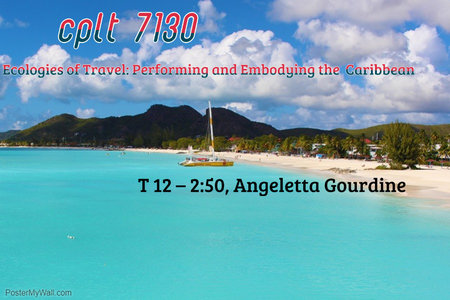 "Ecologies of Travel: Performing and Embodying the Caribbean"

This course will use literature from the Spanish speaking, Francophone, and Anglophone Caribbean to explore the identities created and enabled by the mobility of travel. We will explore travel in its various iterations-- including but not limited to tourism, fieldwork/research, and the act of cross-cultural reading--as a ritualistic means of both cultural production and consumption. This course is interdisciplinary, so in addition to literary narratives, our work will include ethnographies, travel narratives; visual media, and other related cultural artifacts. 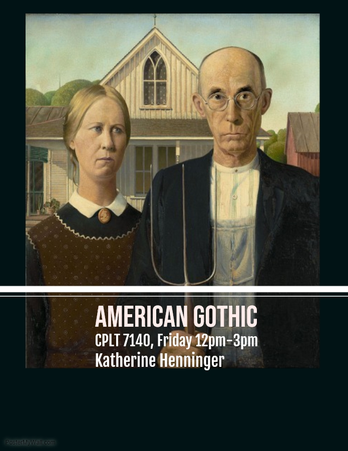 A comparative, multi-media examination of the haunted houses, dark woods, ghostly traces, demonic possessions, monstrous madness and doppelgangers that continue to obsess the American imaginary, at home and abroad. Through a series of case studies from 19th-century to contemporary literature, photography and film, we will trace historical connections between Gothic texts and tensions within discourses of U.S. nationalism, religion, gender, race, slavery, and imperialism, and as these have been used to support, to resist and to reconfigure “American” ideologies in domestic and international contexts. To register our own role in these dynamics, we’ll pay special attention to the ways critical understandings of the American Gothic have changed over time. Specific areas of interest will include the female Gothic, southern Gothic, queer Gothic, Gothic childhood, the new black Gothic, and the ways American Gothic has been represented in non-U.S. texts, specifically as they engage the workings and legacies of U.S. power. Authors/artists may include: Crevecoeur, Hawthorne, Jacobs, Stowe, Hitchcock, Faulkner, O’Connor, Morrison, Kenan, von Trier, del Toro, Sally Mann, and Jordan Peele. 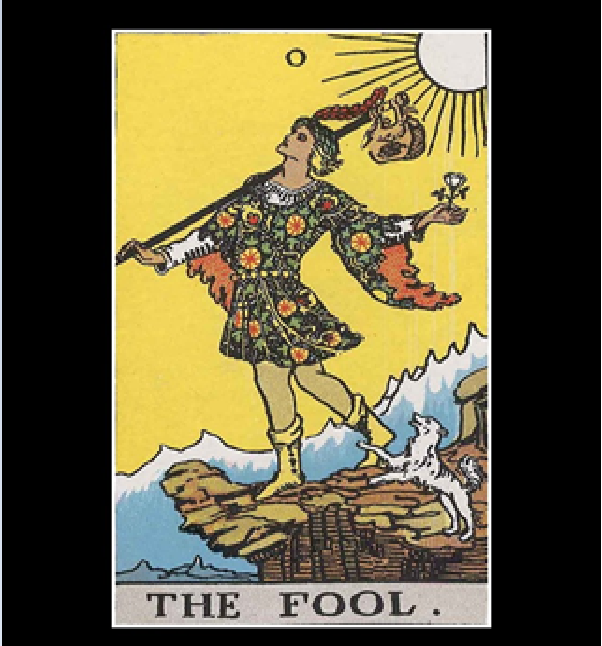 CPLT 2201 Introduction to World Literature, also offered as ENGL 2201, is a general education course, which will present an overview of the literature of the ancient world to 1650 and an introduction to the concept and theory of world literature. In this course we will look at the idea of self-mastery and consider the ways in which war and the hero's journey may reveal for us the development of human perseverance, and ultimately, excellence. The word "hero" may be socially and politically constructed to reflect a task considered useful and important to the society in which the hero belongs. But our idea of "hero" will go beyond, and even against, what is socially useful to consider one who also does battle and masters the interior realm wherein he is plagued by impulses, aims, fears, and competing desires. The interiority of the hero may at times be at odds with the external world. In this class we will ask the questions: What is the hero? How is he constructed? How is the voyage abroad different from the return home? What does war do to the human psyche? How does the voyage home reveal the voyage within? What is human excellence? And how does the hero use the resources available to him to master his environment, his world, and ultimately, himself? 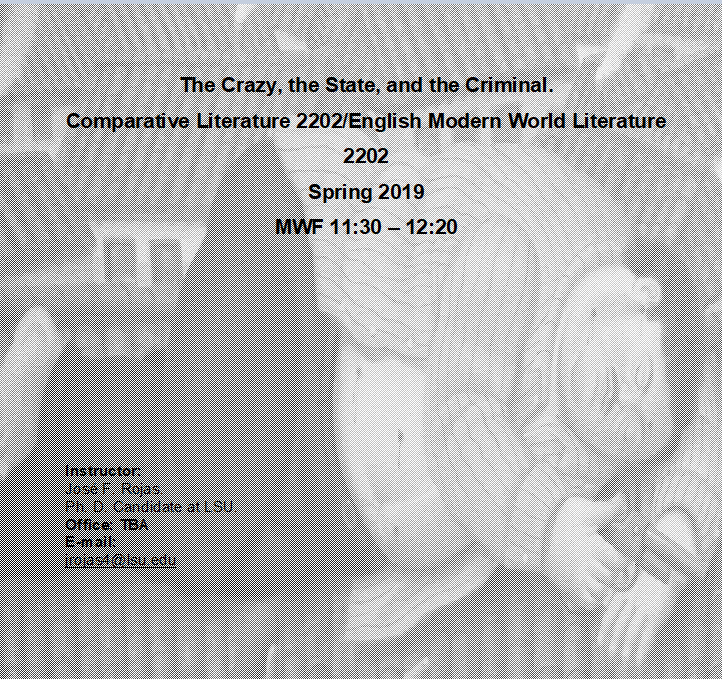 "Modern World Literature: The Crazy, the State, and the Criminal"

This course will address texts from a variety of cultural sources in which “craziness” and criminals have a prominent presence. In this course we will be engaged with the text’s context either historically and socio-geographically. The scope of this course will cover from Renaissance (1650) to present. The works we will look will help with an exploration of the state power while it deals with crazies or criminals as individuals or societies that challenge certain normativity previously implemented. By looking these texts in such as manner we will understand how different societies deal or dealt with laws or social parameters. This course is designed to satisfy the requirements of the General Education Component of Undergraduate Education. 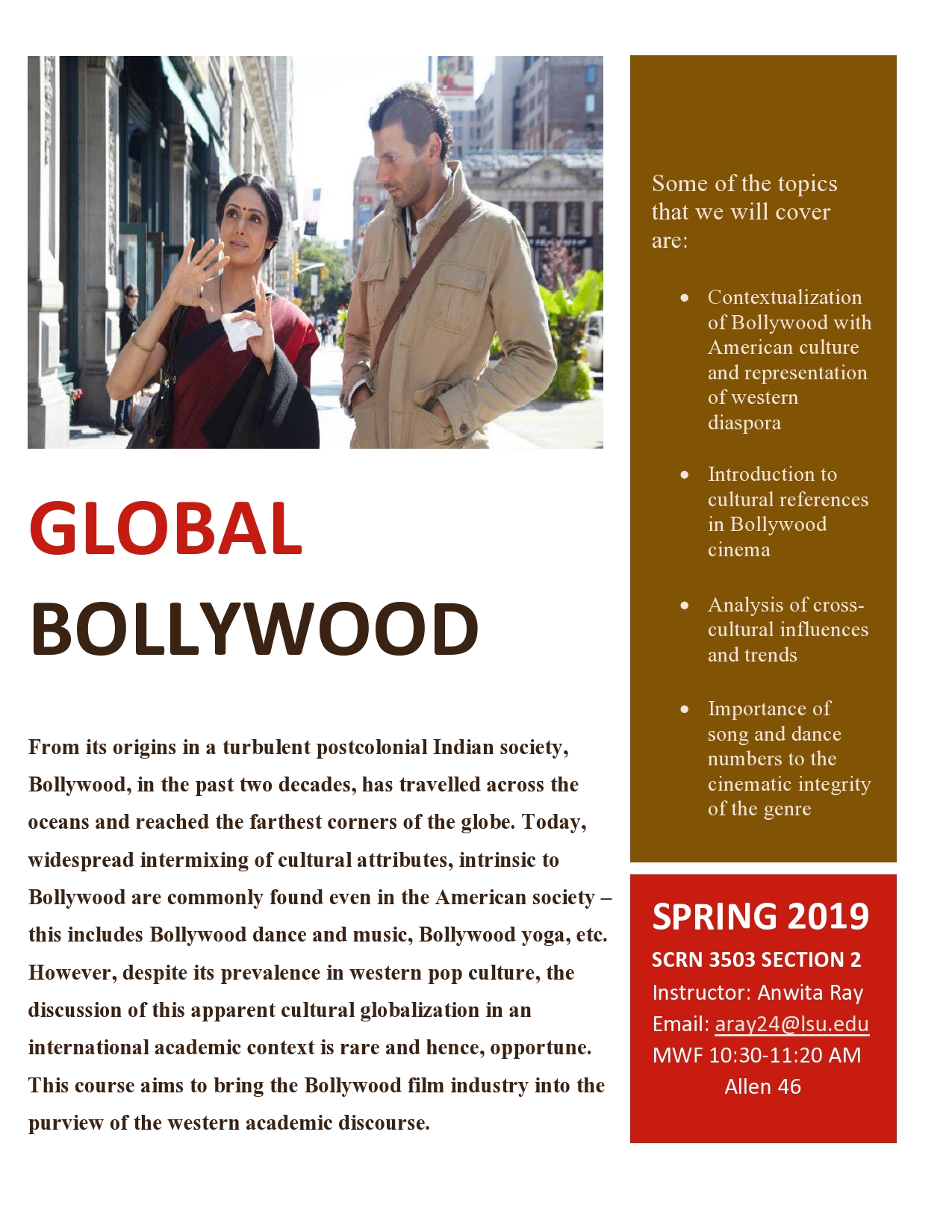 From its origins in a turbulent postcolonial Indian society, Bollywood, in the past two decades, has travelled across the oceans and reached the farthest corners of the globe. Today, widespread intermixing of cultural attributes, intrinsic to Bollywood are commonly found even in the American society – this includes Bollywood dance and music, Bollywood yoga, etc. However, despite its prevalence in western pop culture, the discussion of this apparent cultural globalization in an international academic context is rare and hence, opportune. This course aims to bring the Bollywood film industry into the purview of western academic discourse. Some of the topics that we will cover are:

“History of Literary Theory and Criticism: From Antiquity to Romanticism”

This course explores the history of literary theory from Antiquity to Romanticism. Students will be  instructed in methods of research by engaging in specific projects and with scholarship in comparative literature.  This semester’s course will have the advantage of looking at the contributions made by drama and theatre in the creation of literature and thought during these periods of study.

Filmmakers, playwrights, novelists, and composers worldwide find in the work of the Victorian novelist Charles Dickens an abundance of material to reshape into art of their own. This course examines sources and adaptations/rewritings/appropriations side by side for the reciprocal insights each supplies in understanding the other. Adaptation theory will supply a foundation for our inquiry along with historical and cultural context of Dickens and his adaptors. We will also consider Dickens’s own representations of the world beyond the industrial cities of England and the ways those reimagining him have interpreted those representations. Texts will include not only Dickens’s novels such as Oliver Twist, Martin Chuzzlewith, Great Expectations, and The Mystery of Edwin Drood but also films, plays, novels, and musicals by directors, playwrights, and authors from South Africa, Mexico, India, Australia, France, the United States, etc. Because of this course’s global sweep, the students are likely to find and present on adaptations and appropriations that the professor does not yet know, which will add an extra level of excitement to the class experience.

"Geographies of American Literary Studies: From the Hemispheric to the Archipelagic"

Over the past decade, the so-called “transnational turn” has remapped American literary studies, highlighting new objects and scales of analysis that exceed the conventional boundaries of the nation-state. Borderlands Studies, Critical Regionalism, and “new” Southern Studies have similarly troubled traditional understandings of the subnational by foregrounding the global processes of slavery, migration, and empire that have shaped the U.S. region. This graduate seminar will explore some of these new spatial approaches to theorizing American literature, history, and culture, covering formations that range from the trans-Pacific and oceanic to the hemispheric and archipelagic. We will discuss the critical interventions of scholars such as Gloria Anzaldúa, Hester Blum, Susan Gillman, Ifeoma C. K. Nwankwo, and Jennifer Rae Greeson alongside writers including Herman Melville, Martin Delany, Americo Paredes, and Jessica Hagedorn.

“Seminar in the Drama of Africa”

A comparative study of the dramatic and theatrical expressions of the black cultures in Africa, identifying, where possible, not only African influences on some of the dramatic works in the diaspora, but also the Western classical influences on African plays. Works include those by Wole Soyinka, Ngugi wa Thiong’o, Efua Sutherland, Ama Ata Aidoo, Tewfik al-Hakim, etc.

From Hergé’s Tintin to Goscinny and Uderzo’s Asterix et Cleopatre to Joe Sacco’s Palestine, to Joann Sfar’s The Rabbi’s Cat, the graphic novel genre has long employed tropes of travel and mobility to chronicle a characters adventures and growing knowledge of a larger world as well as their own.  Other graphic novels emphasize personal growth and mobility as in Allison Bechdel’s Fun Home or Marjane Satrapi’s Persepolis.  Coming of age stories written by authors who are reckoning with their own biographies but also excavate the societal context in which they grew up and from which they have often sought to extricate themselves. Kindred and the Black Panther, interrogate African Diasporic histories and futures, as one protagonist (in Kindred) return to antebellum plantations from post-industrial california, while another, (in Black Panther), returns the retro-futurist African country of Wakanda, “the most technologically advanced society on the globe”. This class takes a comparative perspective on the graphic novel genre, to consider colonial and postcolonial epistemologies of these comics in historical perspective.  The graphic novel form also invites discussions of the visual and the materiality of the books themselves.  The para-ethnographic lens (Homes and Marcus 2006) considers how many forms of cultural expression and documentation can be produced by various social critics drawing on distinctive forms of social and historical expertise.

This course will address texts from a variety of cultural sources and traditions in which the transgression or the transgressor have a prominent presence. In this course we will be engaged with the text’s context either historically and/or socio-geographically. The scope of this course will cover Antiquity to Renaissance (1650). By looking at course materials students will be able to understand how different societies dealt with the challengers of normativity, laws, and/or social parameters. This course is designed to satisfy General Education requirements. While reading these texts we will answer questions about transgressors in world literature and cultures. Thus, questions we address include: What is a norm? What is the law? Who makes the law? Who is a transgressor? How can the deviant can be defined? What is a transgression?

“World Literature and the Short Story”

This course will focus on contemporary short fiction from Western and non-Western traditions. The emphasis of the course will be on reading and writing about short stories from a variety of cultural traditions, which we will discuss in the context of World Literature. This course will begin with an introduction to World Literature and to the evolution of the short story genre before exploring more modern examples that may be read as representative of different cultures and regions.

The Indian film industry is the largest producer of films in the world and films have been made in India since the earliest decade of the art. Yet, Indian films have not gained adequate attention in the context of global cinema, apart from films by Satyajit Ray. This course will problematize such invisibility and deconstruct stereotypes such as presuming Indian culture to be analogous to Bollywood. We will look at Indian films thematically from its inception (in 1913) to the contemporary times, and some of the major areas of our discussion will relate to Indian silent forms, post-independence developments, realism and its critical extension, the rise of the angry young man in Bollywood, Indian diasporic films and so on. Basic concepts in Indian film aesthetics and culture will be introduced through film screenings and supplementary analysis of scholarly articles.