Mark Kaiser and Brian Snyder have co-authored The Offshore Drilling Industry and Rig Construction Market in the Gulf of Mexico (London: Springer-Verlag, 2013), a comprehensive text examining the mobile offshore drilling units (MODUs) service and construction industry and the economic impacts of rig construction in the U.S.

MODUs, which include jackups, semi-submersibles and drillships, are supplied through newbuild construction and operate throughout the world in highly competitive regional markets. The book describes and categorizes the industrial organization and major players in the contract drilling and construction markets. It features an evaluation of day rates and tests hypotheses regarding day rate factors.  Contractor decision-making models are developed, including a net-present value model of newbuilding investment, and market capitalization models are derived. The text also examines jackup construction shipyards and processes, and it provides estimates of labor, equipment, and material cost in U.S. construction.

Omowumi (Wumi) Iledare, professor of petroleum economics and policy research and the director of the Energy Information and Data Division of the Center for Energy Studies, was honored with an “Achiever” award at the 6th Annual Nigerian Association for Energy Economics/International Association for Energy Economics (NAEE/IAEE) International Conference held April 22-23, in Lagos, Nigeria. The award was given for “meritorious service in Nigeria’s energy sector, NAEE, and IAEE.” Iledare currently serves as president-elect of the IAEE. His term runs through January 2014, at which time he will assume the role of IAEE president. 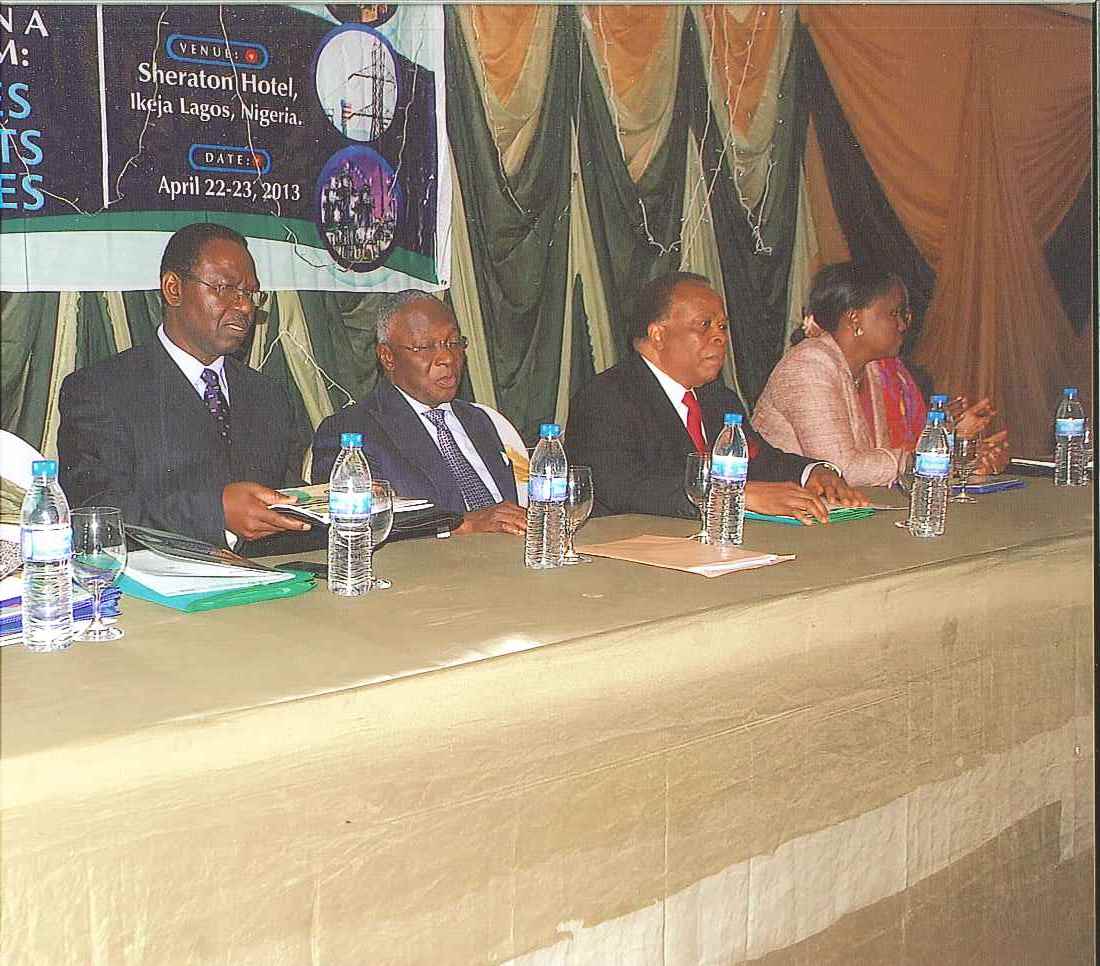 Worldwide, offshore drilling is experiencing a construction boom. Through 2011, drilling contractors and speculators ordered 140 mobile offshore drilling units (MODUs) valued at over $36 billion. Across the globe, new yards are being built and old yards are being expanded or reopened. In their report, “The Offshore Drilling Industry and Rig Construction Market in the Gulf of Mexico, “ Mark Kaiser,  Brian Snyder, and Allan Pulsipher examine the offshore drilling industry and rig construction markets and investigate targeted issues relevant to the GOM. They develop empirical models over specific segments of the industry and prepare aggregate statistics for rig construction by class and geographic region. Quantification of labor and materials requirements for rig construction in the GOM is central to the study, as is the investigation of current and projected trends that are expected to impact the industry in the future.

The CMI has announced the following research grants awarded by the Bureau of Ocean Energy Management for 2013:

CMI at LSU operates under a cooperative agreement, initiated in 1992, between the State of Louisiana and Federal Bureau of Ocean Energy Management, or BOEM, a branch of the Department of the Interior.  CMI coordinates university research in response to federal and state information needs regarding Outer Continental Shelf development of the oil and gas industry, including

• environmental aspects of technologies for extracting and transporting non-energy resources;
• environmental response to changing energy extraction and transport technologies;
• analyses and synthesis of existing data/information from previous studies;
• modeling of environmental, social, and economic processes and systems;
• new information about the structure/function of affected systems via application of descriptive and experimental means;
• projects that improve the application and distribution of multi-source information.

Cartographers from the Louisiana Geological Survey (LGS) have won the award for “Best Reference Map” in the 40th Annual Cartography and Geographic Information Society (CaGIS) Map Design Competition.  The map, titled Geologic Map of the West-Central Barberton Greenstone Belt, South Africa, is described as a “cartographic masterpiece” by competition coordinator Ian Muehlenhaus. The work is noted for its aesthetic appeal and intuitive layout and has been submitted to the Library of Congress in Washington, D.C., for cataloging. This is the seventh map design award with which the LSU unit has been honored.

John Snead, Robert Paulsell and R. Hampton Peele of the LGS Cartographic Section designed and produced the map in collaboration with Gary Byerly, Richard and Betty Fenton Alumni Professor of Geology & Geophysics, and Don Lowe, Max Steineke Professor of geology at Stanford University. The Barberton map, published in 2012 by the Geological Society of America (GSA), depicts some of the planet’s most ancient exposed rocks and offers insight into the earliest development of landforms and life on Earth. The map is the culmination of more than 30 years of geologic fieldwork by Lowe, Byerly and Christoph Heubeck of Freie Universität Berlin.

Founded in 1934 by the Louisiana legislature, LGS performs geoscience research to accomplish its mission of providing unbiased geological and environmental information to promote scientifically sound economic development of the energy, mineral and water resources of the state of Louisiana. The Cartographic Section prepares maps and geographic information systems for its own publication series, other LSU research departments and several agencies of state and federal government through sponsored research.

CaGIS, an international association of developers, researchers and educators in the field of cartography and geographic information science, publishes research at the forefront of developments in the discipline in the Society's CaGIS Journal. It sponsors an annual map design competition, open to mapmakers in the United States and Canada, to promote interest in map design and to recognize significant design advances in cartography.

The map (MCH-103) is available from the Geological Society of America at www.geosociety.org.

Omowumi (Wumi) Iledare, director of the Energy Information and Data Division of the LSU Center for Energy Studies, has been named president-elect of the International Association for Energy Economics, or IAEE. He will become president in January of 2014. Iledare served as president of the IAEE-affiliated U.S. Association for Energy Economics in 2008. The IAEE, founded in 1977 in response to the energy crisis of the 1970s, is a worldwide non-profit professional organization based in the U.S. with members in more than 100 nations. The organization provides an interdisciplinary forum for the exchange of ideas, experience and issues among professionals interested in energy economics.

A frequent guest lecturer, Iledare recently traveled to Ghana, where he spoke on "Oil in West Africa," and to Lagos, where he discussed the implications of the emerging unconventional resources in the U.S. on the global oil market trend.

David Dismukes, professor and associate executive director for the LSU Center for Energy Studies, or CES, has been named director of the Coastal Marine Institute, or CMI. Dismukes, who replaces outgoing CMI director Susan Welsh, will continue in his current capacity at CES. Richard Shaw, professor in the Department of Oceanography and Coastal Sciences, will continue as deputy director of CMI.

CMI at LSU operates under a cooperative agreement, initiated in 1992, between the State of Louisiana and Federal Bureau of Ocean Energy Management, or BOEM, a branch of the Department of the Interior. As CMI director, Dismukes will oversee the grant proposal process and serve as the point of contact for BOEM at LSU.

CMI coordinates university research in response to federal and state information needs regarding Outer Continental Shelf development of the oil and gas industry, including

ALEXANDRIA, VA, February 12, 2013—The Department of Defense (DoD), through the Environmental Security Technology Certification Program (ESTCP), supports the demonstration of technologies that address priority DoD installation energy requirements.  The demonstrations are intended to generate supporting cost and performance data needed for validation of the technology.  The goal is to accelerate the deployment of innovative energy technologies and to enable promising technologies to receive end-user acceptance and be fielded and commercialized more rapidly.

ESTCP is seeking proposals for demonstrations of energy technologies on DoD installations as candidates for funding in Fiscal Year (FY) 2014.  The solicitation requests pre-proposals via Calls for Proposals to DoD organizations and Non-DoD Federal organizations and via a Broad Agency Announcement (BAA) for Private Sector organizations.

The due date for all pre-proposals is Thursday, March 28, 2013.  More information about the solicitation, including instructions and deadlines, is available on the SERDP and ESTCP website at www.serdp-estcp.org/Funding-Opportunities/ESTCP-Solicitations/Installation-Energy-Solicitation.

WEBINAR for the ESTCP INSTALLATION ENERGY SOLICITATION – February 19: ESTCP Director Dr. Jeffrey Marqusee will conduct an online seminar “ESTCP Installation Energy Funding Opportunities” on February 19, 2013, from 2:00-3:00 p.m. Eastern Time.  This “how to play” briefing will offer valuable information for those interested in new ESTCP funding opportunities related to energy topics.  During the online seminar, participants may ask questions about the funding process, the current ESTCP solicitation, and the proposal submission process.  Pre-registration for this webinar is required.  To register, visit https://cc.readytalk.com/cc/s/registrations/new?cid=1i47t869w04a.

If you have difficulty registering, please contact Jon Bunger at jbunger@hgl.com or 571-372-6565.

Dismukes: Thank Natural Gas for What Growth There Is in Manufacturing

A new study by David Dismukes, professor and associate executive director for the Center for Energy Studies (or CES), examines the potential economic impacts of recent capital investments leveraged by the boom in unconventional natural gas production in the state. The study, titled “Unconventional Resources and Louisiana’s Manufacturing Development Renaissance,” was sponsored by America’s Natural Gas Alliance and the Louisiana Oil & Gas Association. It provides an economic overview of the Louisiana manufacturing sector, examines the importance of natural gas to this sector, and shows how the emergence of unconventional resources has resulted in a virtual manufacturing investment renaissance in Louisiana. To date, some $62.3 billion in new capital investments have been announced in Louisiana and are likely to be developed between the next five to eight years.

Statewide impacts: Potential for in-state capital investment in Louisiana to total $20.2 billion (out of the total of $62.3 billion) over the next nine years.

Regional impacts: Most of the manufacturing project announcements are anticipated to be located in South Louisiana, so the impacts to the southern part of the state were estimated using three different regions: South East, South Central, and South West.