High energy prices are expected to continue into the summer, with both oil and natural gas prices at their current levels, if not slightly higher, according to David Dismukes, associate director of the LSU Center for Energy Studies. Dismukes addressed the Sunshine Rotary Club April 28.

"Unlike past energy crises of the 1970s and early 1980s, today's current crisis is rooted in the basic economic fundamentals of supply and demand rather than in geopolitical issues," he said. "One of the more important driving factors of today's tight energy markets has been the phenomenal growth of energy demand by the developing world-particularly China."

One of the short- and intermediate-run realities of the changes in global energy markets is that the U.S. will become more sensitive to energy imports, he noted. Crude oil imports will continue to grow as a percent of overall consumption, and unlike past historic periods, natural gas imports will become increasingly important and rise from today's level, which is about one percent, to well over 10 percent by 2025. 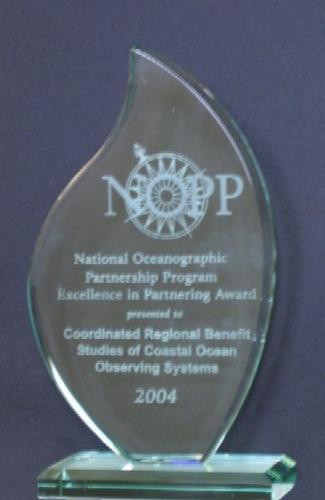 David Dismukes, associate director of the CES, won the award for the best article published during 2004 from the National Regulatory Research Institute. His article, "Using Competitive Bidding as a Means of Securing the Best of Competitive and Regulated Worlds," published in the Journal of Applied Regulation, analyzes the benefits of allowing industrial plants to buy electricity from independent power plants as well as regulated utilities. Tom Ballinger of the Florida Public Service Commission and Elizabeth Downer of the Acadian Consulting Group were coauthors.

Mark Kaiser, an associate professor at the CES, was awarded an Excellence in Partnering award by the National Oceanographic Partnership Program (NOPP) for his contribution to a study titled "Coordinated Regional Benefit Studies of Coastal Ocean Observing Systems." The award was presented at a meeting of the National Ocean Research Leadership Council, which is composed of the heads of the fifteen federal agencies concerned with ocean science and policy. The meeting was held at the White House Conference Center in Washington, D.C. The project was coordinated by the Woods Hole Oceanographic institute and involved several universities as well as LSU. Kaiser's component of the project dealt with the Gulf of Mexico, especially the value of better weather information to the offshore oil and gas industry.

Guy F. Caruso, administrator for the U.S. Department of Energy (DOE) Energy Information Administration (EIA), presented DOE's official Annual Energy Outlook, 2005, Wednesday, April 13, 2005, at the Center for Energy Studies Advisory Council meeting and as part of the inaugural meeting of the Louisiana Chapter of the U.S. Association for Energy Economics. Caruso discussed the DOE's official outlook for supply and prices for crude oil, natural gas, and refined energy products, including the outlook for summer gasoline prices.

Despite the recent meltdown of the competitive energy business, Louisiana could realize a total of approximately $4.1 billion in capital investments and the creation of more than 4,963 construction jobs through the continued development of the Louisiana independent power industry. A report from the LSU Center for Energy Studies, The Power of Generation: Continued Economic Benefits from Independent Power Development in Louisiana, updates a previously issued CES report on the economic impacts associated with the development and utilization of independent power providers (IPPs) or "merchant" plants in Louisiana.

The study estimates that the development of these independent power generation facilities is likely to result in:

A likely investment of 7,408 MWs of new and efficient power generation in Louisiana despite the current industry meltdown;

An estimated total economic impact associated with the construction of independent power facilities in Louisiana of $1.5 billion by 2005.

Total construction employment opportunities of 4,963 jobs. Some 2,408 jobs are associated with the multiplier effects of these construction activities.

Study author, Dr. David Dismukes, noted: "...since our last study, we've known that there were significant opportunities for large infusions of capital into the Louisiana economy from this industry. The real issue on a forward going basis will be whether these new plants will sit idle, or will they be used to replace older less efficient generation in the region." In addition to providing updated information on the economic impact these independent power plants have on the Louisiana economy, the recently released report provides some broad estimates of the potential efficiency improvements that could result from the increased use of these merchant facilities.

The study finds that:

There are potentially significant opportunities for independent power facilities to begin to displace older utility generation facilities. Based upon estimates provided in the report, the potential fuel cost savings associated with this displacement are as follows:

The Power of Generation: Continued Economic Benefits from Independent Power Development in Louisiana.