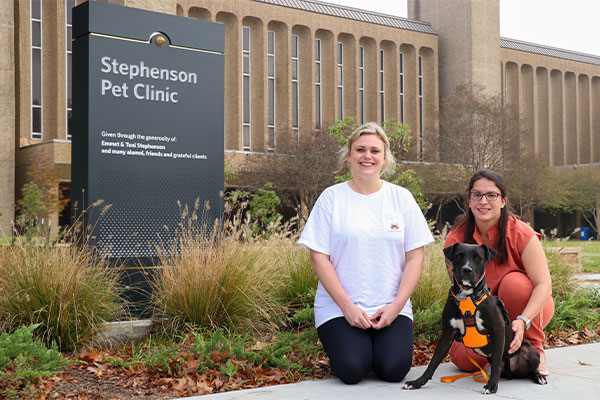 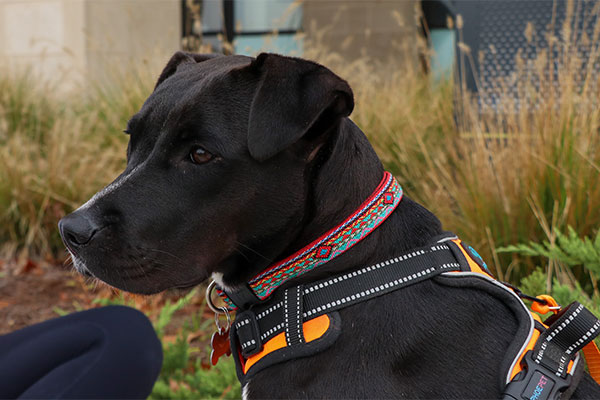 When Good Samaritan Kati Dooley answered a message from a writer at LSU School of Veterinary Medicine asking about the dog she found in a ditch and brought to the school’s ER service in July 2022, her first words were, “She lived? That makes me so happy. I think I’m going to cry.”

Like most, Kati never planned to be a Good Samaritan. The day she encountered the dog, Kati had just been discharged from the hospital days after undergoing emergency surgery. Her mother was driving her home to St. Francisville, La., when they spotted a black dog in a ditch along Highway 61, near a trailer park.

“It was a rough area. I told my mother to turn back. As we got closer, I saw the dog dragging itself, unable to walk, slumped over. I told her, ‘I’ve got to get the dog,’” said Kati, 30, a registered nurse at Our Lady of the Lake Children’s Hospital and a previous animal shelter volunteer.

Kati tried to lure the dog by tossing pieces of shrimp her mother had brought her for the drive home. As the emaciated dog tried to drag itself closer, Kati put down a bowl of red beans and rice, and when the dog began to eat, she grabbed a towel from her car.

“She looked at me and wanted to run, but she gave up. I put the towel over her, picked her up, and put her in the back seat. She didn’t try to move. I called the LSU vet school. I’m so glad I had somewhere reliable to bring her. She needed help immediately. I didn’t think twice about where to take her,” she said.

At LSU School of Veterinary Medicine, they were met at the entrance by a clinician with a gurney. He told Kati they’d do everything they could to save the dog’s life.

“I cried, feeling like she was going to be put down, she was in such bad shape. I told myself, at least I got her out of her misery. At least she wouldn’t die alone. All the way to LSU, I concentrated on showing her love and attention to comfort her,” she said.

The dog was stabilized in the LSU Vet Med Small Animal Hospital’s ER and ICU service. She was diagnosed with a chronic fractured leg that healed improperly over a long period of time. She was emaciated, flea infested, anemic, dehydrated, heartworm positive, and her face was covered with scars from being bitten.

“She wasn’t aggressive at all, even with all that had been done to her,” Kati said.

Enter Jacqueline Perez Menjivar, the dog’s second Good Samaritan. Jacqueline is a veterinary nurse in LSU Vet Med’s Community Practice and has also worked in the ER & ICU service. When Jacqueline walked up to the dog’s kennel in ICU the dog was so weak that she couldn’t stand.

“She looked at me and put her head in my hand. In that moment, I made a promise to her. I told her, ‘I’ll take care of you,’” Jacqueline said.

Once stabilized, the dog was transferred to Companion Animal Alliance, the East Baton Rouge Parish open-intake shelter. CAA has been operating at critical capacity for well over a year, with all of its kennels full and animals in crates often lining the hallways.

“I called CAA to check on her. Based on how sick she was and the lack of resources to help her, she was scheduled to be euthanized. I picked her up from CAA that day. I named her Malia and signed up to be her medical foster. She came home with me on July 11, 2022,” Jacqueline said.

In August 2022, Malia’s right hind leg was amputated at CAA.

“She is the cutest little tripod ever. It took her a bit of time to regain her strength, but she gets around very well now. She even has the zoomies from time to time,” Jacqueline said.

Malia, 5, is a Labrador retriever mix who weighs 36 lbs. She has completed heartworm treatment, is up to date on vaccines and preventatives. She loves other dogs and is good with cats and people.

“She is healthy and a happy, well-adjusted pup,” Jacqueline said.

Now, Jacqueline is looking for a third angel for Malia, someone to give her a permanent home. Malia is available for adoption through CAA as of Dec. 9, 2022. To apply to adopt Malia, start by filling out the adoption survey and include her name and impound number 123622.

The LSU School of Veterinary Medicine is one of only 33 veterinary schools in the U.S. and the only one in Louisiana. The LSU SVM is dedicated to improving and protecting the lives of animals and people through superior education, transformational research, and compassionate care. We teach. We heal. We discover. We protect.