Birds Are Declining in a Supposedly ‘Untouched’ Region of Amazon Rainforest

Bird numbers and diversity are dropping even within the best-protected forests, study finds. The scientists' only explanation is climate change.

[2 June 2021] In 2008, Philip Stouffer (Professor, School of Renewable Natural Resources) found himself befuddled in the middle of the Amazon rainforest. It had been nearly 20 years since his first visit to the Biological Dynamics of Forest Fragments Project (BDFFP), a long-term study of rainforest fragmentation based at a protected 37,000-acre portion of the Brazilian forest about 50 miles north of the city of Manaus. His surroundings were as lush as as they had always been, and old, tall trees testified to the ecosystem’s good health. Like in previous visits, he expected to spot some of the Amazon’s most elusive birds. But that wasn’t the case. “Rare birds were harder to find than we anticipated,” Stouffer, a Louisiana State University biologist, says. He spent the next eight years trying to confirm his observation that the area's birdlife had changed and to explain why it was happening.

Read the rest of the story from the Audubon Society 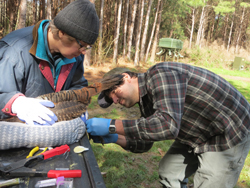 [05/04/20] BATON ROUGE, La. — COVID-19 has had a profound effect on people for the past three months in terms of loss of life and economic costs. But it also may be playing a role in the potential decline of the Eastern wild turkey population.

[Left] Mike Wheeler, right, a doctoral student in the LSU AgCenter School of Renewable Natural Resources, draws blood from a captured Eastern wild turkey as part of a research project. Eastern wild turkey populations have been in a decline for at least the past decade, and more birds are being harvested this year. COVID-19 restrictions have led to a noticeably higher hunter effort pursuing wild turkeys because of limits being placed on other activities. Photo by Bret Collier/LSU AgCenter

Bret Collier, an associate professor in the LSU AgCenter School of Renewable Natural Resources, is one of the nation’s leading researchers regarding wild turkeys. He and Michael Chamberlain, a professor at the University of Georgia, are examining preliminary data on harvesting wild turkeys across the southeastern United States during the pandemic.

Both Collier and Chamberlain are concerned that an increasing number of hunters and their efforts are leading to a much higher number of mature birds being harvested than in a typical year.

“Right now, we are seeing an increase in harvest on public lands and an increase in hunter days afield,” Collier said. “Wild turkey harvest in Louisiana was 15% higher by the third week of the 2020 season relative to the 2019 season.”

Chamberlain is finding even higher rates in Georgia. The number of hunters using wildlife management areas there is up 47%. Harvest was up 26% statewide during the first 23 days of the season, including 43% higher on public lands.

Higher numbers of harvested birds are also being found in North Carolina and Tennessee. Mississippi’s harvest rates are similar to previous years, but the state has seen an increase in hunter days afield.

According to Collier, turkey harvest is a function of hunter effort — more hunters in the woods means more harvested birds.

Even if hunters do not harvest a gobbler, the increasing number of hunters can interfere with the breeding process.

“Wild turkeys are the only gamebird in the contiguous United States hunted specifically before and during the breeding season and when females are incubating nests,” Collier said. “More hunters means an increased likelihood of disturbing a hen on the nest. Research shows hens disturbed early in the incubation process are more likely to abandon the nest.”

Eastern wild turkey populations have been in decline for the past decade. Part of this decline can be attributed to reductions in reproductive output. Hens select which males they will breed with, and if that male is removed, she will not just breed with the next available male. Instead, she undergoes another evaluation process of the available males, thus delaying the breeding cycle.

Research indicates later breeding results in egg clutches of smaller size and increased infertility of the eggs. Also, with a higher incidence of the removal of gobblers, males with superior traits are not passing these desirable characteristics to young poults.

“Another problem with a higher concentration of hunters being in the woods is that it increases the chances of more unsafe interactions while hunting,” Collier said.

While Eastern wild turkey numbers may suffer, COVID-19 may benefit other subspecies of wild turkeys, such as the Rio Grande, Merriam’s and Gould’s. While local hunters will likely increase the pressure on these subspecies, the number of nonresidents who pursue them each year will be reduced.

For example, Texas has seen nonresident wild turkey license sales decline approximately 79% by the end of April. Widespread travel restrictions, requirements to self-quarantine after travel among states and government mandates to shelter-in-place have reduced hunting trips. Residents from Louisiana faced travel restrictions placed on them by the states of Texas and Florida.

>Collier has been working with the Louisiana Department of Wildlife and Fisheries since 2014 focusing on research related to wild turkeys. Collier and LDWF are monitoring this year’s harvest closely to determine if it has an effect on both the reproduction rates and the population size of the Eastern wild turkey in the state.

The spring 2019 issue of Louisiana Agriculture focuses on the “birds and the bees” and the importance of reproduction and breeding to the success and profitability of our agriculture industry. LSU AgCenter scientists are dedicated to finding ways to not only improve plants and animals on the farm but also in nature to enhance and sustain our environment. See below for links to the articles. If you would like to subscribe to the print copy, or if you have any questions, or if you want to unsubscribe from this list, please contact the editor, Linda Benedict. The LSU AgCenter is here to serve you.