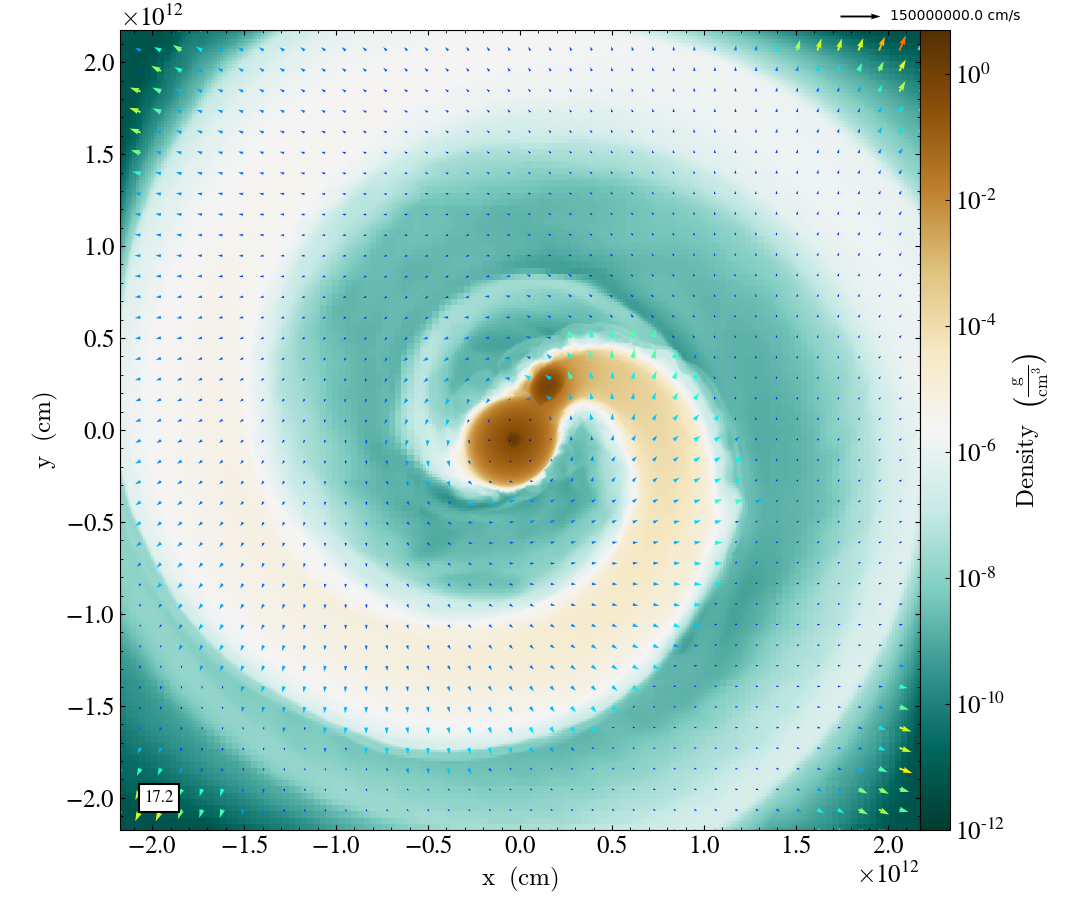 A density slice from a simulation of a merging contact binary system, viewing it just before the system merges. The color indicates how dense the gas is in the midplane, with brown indicating the densest gas and blue the least dense.

Researchers who recently developed “Octo-Tiger,” a breakthrough astrophysics code that simulates the evolution of star systems, have been granted access to the supercomputer Fugaku in Tokyo.

Announced by The Research Organization for Information Science and Technology, researchers from Louisiana State University and the University of Stuttgart have been awarded resources to test the Octo-Tiger code on Fugaku, exploring the novel architecture and benefiting from the world’s fastest supercomputer, to progress large simulations more expediently and possibly at a higher resolution.

“This is a great opportunity for Octo-Tiger to be able to run large simulations even faster than previously experienced,” said Patrick Diehl, researcher, LSU Center of Computation & Technology.

“Thanks to the awarding of resources to access Fugaku, we will be able to substantially reduce the computational time to complete a simulation with Octo-Tiger,” said Shiber

Octo-Tiger is currently optimized to simulate the merger of well-resolved stars that can be approximated by barotropic structures, such as white dwarfs or main sequence stars. The gravity solver conserves angular momentum to machine precision, thanks to a correction algorithm. This code uses HPX parallelization, allowing the overlap of work and communication and leading to excellent scaling properties to solve large problems in shorter time frames.

Published in Monthly Notices of the Royal Astronomical Society, “Octo-Tiger: A New, 3D Hydrodynamic Code for Stellar Mergers That Uses HPX Parallelisation,” investigates the code performance and precision through benchmark testing. The authors, Marcello, Shiber, Diehl, Kaiser and LSU Professors Juhan Frank and Geoffrey C. Clayton—together with collaborators Dr. Orsola De Marco, professor at Macquarie University, Sydney, Australia and Dr. Patrick M. Motl, professor at Indiana University Kokomo—compared their results to analytic solutions, when known, and other grid-based codes, such as the popular FLASH. In addition, they computed the interaction between two white dwarfs from the early mass transfer through to the merger and compared the results with past simulations of similar systems.

The research outlines the current and planned areas of development aimed at tackling several physical phenomena connected to observations of transients.

The supercomputer Fugaku, jointly developed by RIKEN and Fujitsu since 2014, was completed on March 9, 2021. On the same day, Fugaku became available for shared use, providing access for a wide range of researchers and users in academic and industrial fields.