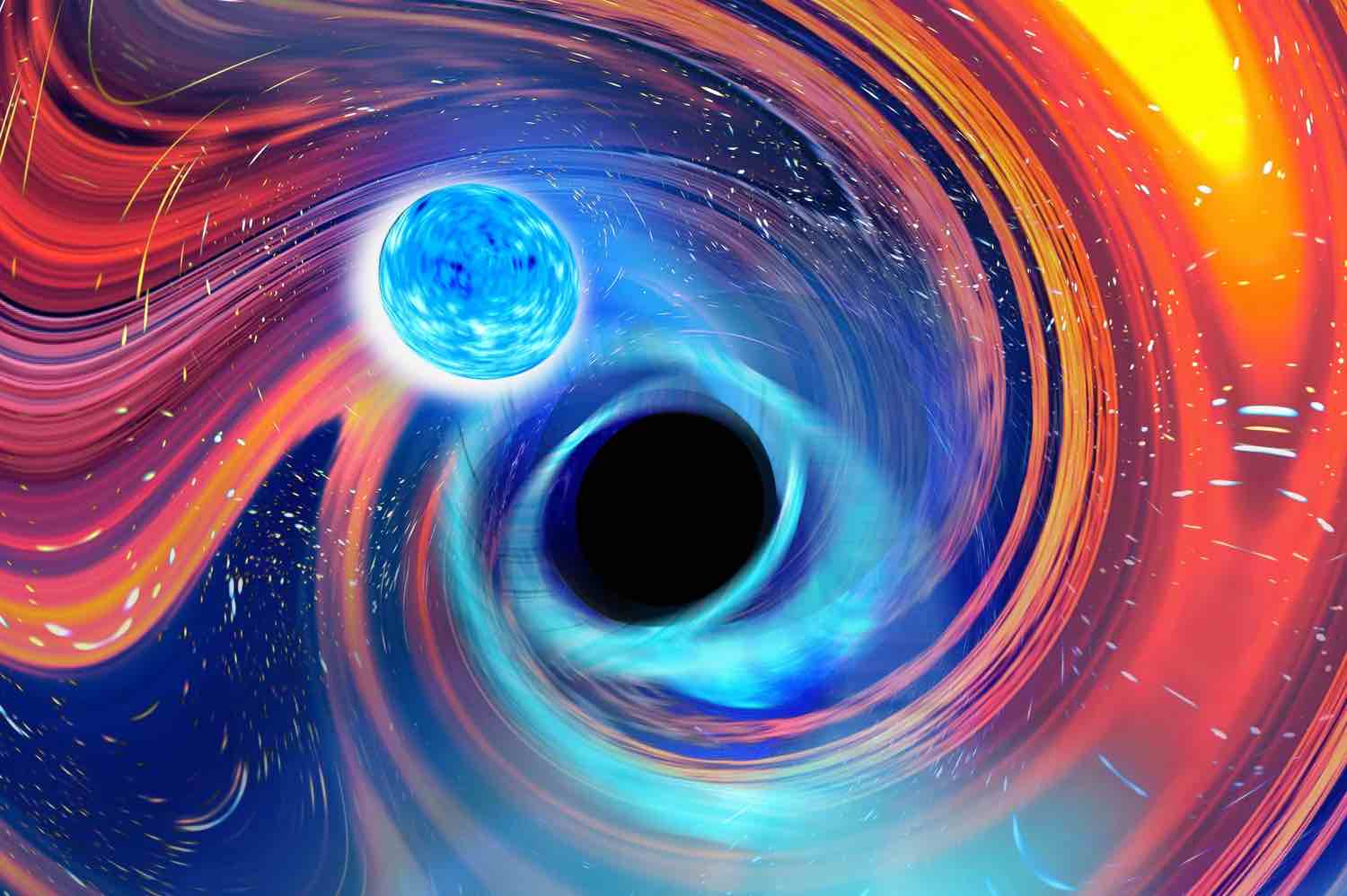 An artistic image of what happens when a monstrous black hole collides with — and gulps down — a neutron star the size of a large city.
Carl Knox/OzGrav/Swinburne

For the first time, researchers have confirmed the detection of a collision between a black hole and a neutron star. In fact, the scientists detected not one but two such events occurring just 10 days apart in January 2020. The extreme events made splashes in space that sent gravitational waves rippling across at least 900 million light-years to reach Earth. In each case, the neutron star was likely swallowed whole by its black hole partner.

Now, in a new study, scientists have announced the detection of gravitational waves from two rare events, each involving the collision of a black hole and a neutron star. The gravitational waves were detected by the National Science Foundation, or NSF, Laser Interferometer Gravitational-Wave Observatory, or LIGO, in the United States and by the Virgo detector in Italy. The KAGRA detector in Japan, joined the LIGO-Virgo network in 2020, but was not online during these detections.

Guillermo Valdes was a postdoctoral researcher at LSU until December 2020.

“I joined the paper writing team, or PWT, while I was at LSU. In the PWT, I was the representative of the Detector Characterization group, responsible for reporting the status of the LIGO and Virgo gravitational-wave detectors at the time of the events' observation,” said Valdes, currently a postdoctoral researcher at Texas A&M University. “That includes the sensitivity and calibration of the detectors and any feature in the data that could affect the estimation of the parameters of the events, such as their masses.”

“These are the first reported results of the second part of the third observing run (O3b / O3 was divided in O3a and O3b). The events observed, called GW200105 and GW200115, are gravitational-wave signals from two different Neutron Star Black Hole coalescence systems, a new kind of astrophysical system not previously observed,” said Valdes.

Astronomers have spent decades searching for neutron stars orbiting black holes in the Milky Way, our home galaxy, but have found none so far.

“With this new discovery of neutron star- black hole mergers outside our galaxy, we have found the missing type of binary. We can finally begin to understand how many of these systems exist, how often they merge, and why we have not yet seen examples in the Milky Way," said Astrid Lamberts, a CNRS researcher of the Virgo collaboration at the Artemis and Lagrange laboratories, in Nice.

The first of the two events, GW200105, was observed by the LIGO Livingston and Virgo detectors. It produced a strong signal in the LIGO detector but had a small signal-to-noise in the Virgo detector. The other LIGO detector, located in Hanford, Washington, was temporarily offline. Given the nature of the gravitational waves, the team inferred that the signal was caused by a black hole colliding with a 1.9-solar-mass compact object, later identified as a neutron star. This merger took place 900 million light-years away.

Because the signal was strong in only one detector, the location of the merger on the sky remains uncertain, lying somewhere in an area that is 34,000 times the size of a full moon.

The second event, GW200115, was detected by both LIGO detectors and the Virgo detector. GW200115 comes from the merger of a black hole with a 1.5-solar mass neutron star that took place roughly 1 billion light-years from Earth. Using information from all three instruments, scientists were better able to narrow down the part of the sky where this event occurred. Nevertheless, the localized area is almost 3,000 times the size of a full moon.

Astronomers were alerted to both events soon after they were detected in gravitational waves and subsequently searched the skies for associated flashes of light. None were found. This is not surprising due to the very large distance to these mergers, which means that any light coming from them, no matter what the wavelength, would be very dim and hard to detect with even the most powerful telescopes. Additionally, the mergers likely did not give off a light show in any case because their black holes were big enough that they swallowed the neutron stars whole.

Previously, the LIGO-Virgo network found two other candidate neutron star-black hole mergers. One event called GW190814, detected Aug. 14, 2019, involved a collision of a 23-solar-mass black hole with an object of about 2.6 solar masses, which could be either the heaviest known neutron star or the lightest known black hole. Another candidate event, called GW190426, and detected on April 26, 2019, was thought to possibly be a neutron star-black hole merger, but could also simply be the result of detector noise.

Having confidently observed two examples of gravitational waves from black holes merging with neutron stars, researchers now estimate that, within one billion light-years of Earth, roughly one such merger happens per month.

The LIGO Livingston observatory is located on LSU property, and LSU faculty, students and research staff are major contributors to the international LIGO Scientific Collaboration, or LSC. Gabriela González, LSU Boyd professor of physics, is the former elected spokesperson, who led the LSC during the initial detection. Together with other leaders and founders of the LIGO effort, González made the official statements about the historic detection on Thursday, Feb. 11, 2016 at the National Press Club in Washington, D.C., before gathered international science press.

LSU’s investment in gravitational-wave detection spans more than four decades, and is among the longest of the institutions contributing to the present discovery. LSU faculty, students and scholars have had leading roles in the development of several generations of gravitational wave detectors, in their commissioning and operation as well as the collaborations formed.

This material is based upon work supported by NSF’s LIGO Laboratory which is a major facility funded by the NSF.

For those wishing for a deeper dive into these LIGO-Virgo results, the team has scheduled a webinar intended for a scientific audience. This is the 8th webinar in the LIGO-Virgo-KAGRA Webinar Series. The one-hour Zoom webinar will be on July 1, 2021, at 14:00 Universal Time Coordinated (7:00 Pacific Daylight Time; 10:00 Eastern Daylight Time; 16:00 Central European Summer Time; 23:00 Japan Standard Time).

The Zoom webinar will also be live streamed and a recording will be available upon request.