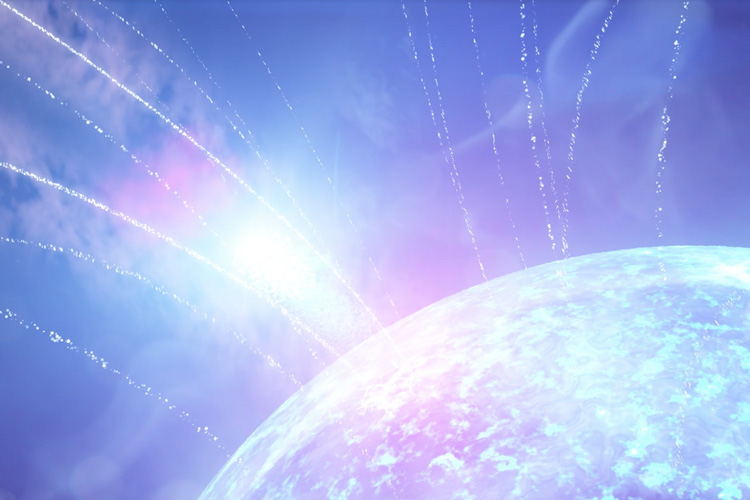 On April 15, 2020, a wave of X-rays and gamma rays lasting only a fraction of a second triggered detectors on NASA and European spacecraft. The event was a giant flare from a magnetar, a type of city-sized stellar remnant that boasts the strongest magnetic fields known.
Credit: NASA’s Goddard Space Flight Center

A brief burst of high-energy light swept through the solar system on April 15, triggering many space-based instruments, including those aboard NASA and European missions. Now, multiple international science teams conclude that the blast came from a supermagnetized stellar remnant known as a magnetar located in a neighboring galaxy.

This finding confirms long-held suspicions that some gamma-ray bursts, or GRBs, which are cosmic eruptions detected in the sky almost daily, are in fact powerful flares from magnetars relatively close to home.

“Discovering the existence of a population of extragalactic magnetar flares will provide future research opportunities for LIGO and nuclear physicists to delve into core questions of the universe,” said LSU Department of Physics & Astronomy Assistant Professor Eric Burns, who is part of this international discovery.

The April 15 magnetar flare proves that these events constitute their own class of GRBs. Burns led a paper studying additional suspects using data from numerous missions. The findings will appear in The Astrophysical Journal Letters. Bursts near the galaxy M81 in 2005 and the Andromeda galaxy, or M31, in 2007 had already been suggested to be giant flares, and the team identified a flare in M83, also seen in 2007 but it is newly reported. Scientists also observed giant flares in 1979, 1998 and 2004.

“It’s a small sample, but we now have a better idea of their true energies, and how far we can detect them,” Burns said. “A few percent of short GRBs may really be magnetar giant flares. In fact, they may be the most common high-energy outbursts we’ve detected so far beyond our galaxy – about five times more frequent than supernovae.”

GRBs are the most powerful explosions in the cosmos and can be detected across billions of light-years. Those lasting less than about two seconds, called short GRBs, occur when a pair of orbiting neutron stars, which are the crushed remnants of exploded stars, spiral into each other and merge. Astronomers confirmed this scenario for at least some short GRBs in 2017, when a burst followed the arrival of gravitational waves, or ripples in space-time, produced when neutron stars merged 130 million light-years away.

"The favored explanation for most short gamma-ray bursts is that they're emitted by a jet of debris moving near the speed of light produced in the merger of neutron stars or a neutron star and a black hole," said Eric Burns a member of Fermi's Gamma-ray Burst Monitor team, then at NASA's Goddard Space Flight Center in Greenbelt, Maryland. "LIGO tells us there was a merger of compact objects, and Fermi tells us there was a short gamma-ray burst. Together, we know that what we observed was the merging of two neutron stars, dramatically confirming the relationship."

Magnetars are neutron stars with the strongest-known magnetic fields, with up to a thousand times the intensity of typical neutron stars and up to 10 trillion times the strength of a refrigerator magnet. Modest disturbances to the magnetic field can cause magnetars to erupt with sporadic X-ray bursts for weeks or longer. Magnetars rarely produce enormous eruptions called giant flares that produce gamma rays, the highest-energy form of light.

Shortly before 4:42 a.m. EDT on April 15, 2020, a brief, powerful burst of x-rays and gamma rays swept past Mars, triggering the Russian High Energy Neutron Detector aboard NASA’s Mars Odyssey spacecraft, which has been orbiting the planet since 2001. About 6.6 minutes later, the burst triggered the Russian Konus instrument aboard NASA’s Wind satellite, which orbits a point between Earth and the Sun located about 930,000 miles away. After another 4.5 seconds, the radiation passed Earth, triggering instruments on NASA’s Fermi Gamma-ray Space Telescope, as well as on the European Space Agency’s INTEGRAL satellite and Atmosphere-Space Interactions Monitor, or ASIM, aboard the International Space Station.

The pulse of radiation lasted just 140 milliseconds, or as fast as an eye blink or a finger snap.

The Fermi, Swift, Wind, Mars Odyssey and INTEGRAL missions all participate in a GRB-locating system called the InterPlanetary Network, or IPN. Now funded by the Fermi project, the IPN has operated since the late 1970s using different spacecraft located throughout the solar system. Because the signal reached each detector at different times, any pair of them can help narrow down a burst’s location in the sky. The greater the distances between spacecraft, the better the technique’s precision.

The IPN placed the April 15 burst, called GRB 200415A, squarely in the central region of NGC 253, a bright spiral galaxy located about 11.4 million light-years away in the constellation Sculptor. This is the most precise sky position yet determined for a magnetar located beyond the Large Magellanic Cloud, a satellite of the galaxy and host to a giant flare in 1979, the first ever detected.

Giant flares from magnetars in the Milky Way and its satellites evolve in a distinct way, with a rapid rise to peak brightness followed by a more gradual tail of fluctuating emission. These variations result from the magnetar’s rotation, which repeatedly brings the flare location in and out of view from Earth, much like a lighthouse.

Observing this fluctuating tail is conclusive evidence of a giant flare. Seen from millions of light-years away, though, this emission is too dim to detect with today’s instruments. Because these signatures are missing, giant flares in the galactic neighborhood may be masquerading as much more distant and powerful merger-type GRBs.

Recently, NASA announced that it has chosen four small-scale astrophysics missions for further concept development in a new program called Pioneers. Through small satellites and scientific balloons, these selections enable new platforms for exploring cosmic phenomena such as galaxy evolution, exoplanets, high-energy neutrinos, and neutron star mergers. One of the missions, called StarBurst, led by Dan Kocevski, NASA's Marshall Space Flight Center, as the principal investigator and Eric Burns as the science lead, is designed to study short GRBs, in partnership with LIGO for further cosmic exploration, together they will continue to understand these sources.