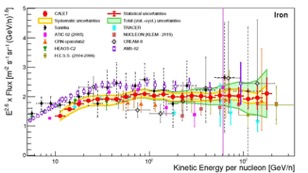 Iron spectrum (multiplied by E2.6) measured by CALET and other experiments.

LSU researchers contribute to a discovery that adds a new wrinkle to our understanding of the origins of matter accelerated to high energies in the galaxy.

New findings published this week in Physical Review Letters, Measurement of the Iron Spectrum in Cosmic Rays from 10  GeV/n to 2.0  TeV/n with the Calorimetric Electron Telescope on the International Space Station, suggest that cosmic ray nuclei of hydrogen, carbon and oxygen travel through the galaxy toward Earth in a similar way, but, surprisingly, that iron arrives at Earth differently.

A series of recent publications based on results from the CALorimetric Electron Telescope, or CALET, instrument on the International Space Station, or ISS, have cast new light on the abundance of high-energy cosmic ray nuclei -- atoms stripped of their electrons moving through space at nearly the speed of light – that arrive at Earth from outside the Solar System.

“For many years, the standard model to explain the origin of high-energy cosmic rays, or HECR, has been based on the assumption that these particles are produced by nuclear reactions inside stars, accelerated to high energies by the turbulent shock waves in sources like supernovae, and then ejected into the interstellar medium and scattered by the magnetic fields they encounter as they propagate through the Galaxy to Earth,” said Michael Cherry, LSU Department of Physics & Astronomy professor emeritus and co-author on the new publication.

“The study of cosmic rays is the study of how the universe generates and distributes matter, and how that affects the evolution of the galaxy,” said John Krizmanic, senior scientist at the University of Maryland’s Center for Space Science and Technology, or CSST, and co-author.

Measurements of the HECR nuclear composition and precise energy spectra – the intensity of particles at each energy – provide a means to understand the sources of high-energy matter and how those cosmic ray nuclei propagate from their distant sources through the galaxy to Earth.

The new CALET results in the December 18, 2020 and June 18, 2021 issues of the journal Physical Review Letters confirm the previously observed flattening of the carbon and oxygen spectra in detail at energies around 200 billion electron volts or giga-electron volts, or GeV, per nucleon, but not for iron, and extend the earlier results to higher energies with improved statistics.

CALET has been collecting data about cosmic rays since 2015. The data include details such as how many and what kinds of particles are arriving, and how much energy they’re arriving with. The Japanese, Italian and American teams that manage CALET collaborated on the new research.

The current HECR measurements suggest that the particles travel well outside the disk of the Milky Way Galaxy and are confined in a diffuse halo extending well beyond the disk. Independent evidence of the halo can be obtained from observations of radio synchrotron emission of cosmic ray electrons and gamma rays produced by HECR interactions in the halo material. As a result, the diffusion of the HECR through the galaxy provides a measurement of the structure of the galaxy and how the particles propagate through the galaxy, in particular through observations of the abundances of individual HECR elements and their intensity vs. the particle energy, i.e. their energy spectra.

Iron on the move

Interestingly, the CALET results agree well with the results from the earlier PAMELA and CREAM experiments as well as agree with the flattening of the curves reported by the AMS experiment and also on the space station -- but differ from AMS in the absolute magnitudes of the fluxes measured. These results are also consistent with the results CALET published previously in Physical Review Letters in May 2019 on the measurement of the cosmic ray proton spectrum from 50 GeV to 10 trillion electron volts, or TeV. The similarity of the nature of the spectral breaks in the proton, carbon and oxygen spectra indicate a potential common source, but the cause of these changes in the nature of the spectra is not understood.

“There are several possibilities to explain the differences between iron and the three lighter elements. The cosmic rays could accelerate and travel through the Galaxy differently, although scientists generally believe they understand how cosmic rays propagate,” explains Krizmanic.

Scientists generally believe that exploding stars, or supernovae, are a primary source of high-energy cosmic rays, but neutron stars or very massive stars could be other potential sources.

The largest cosmic ray detectors have been located on the ground or flown on balloons high in the atmosphere. But by the time cosmic rays reach those instruments, they have already interacted with Earth’s atmosphere and broken down into secondary particles. Identifying precisely how many primary cosmic rays are arriving, which elements and their energies requires observations from space. CALET, being on the ISS above the atmosphere, can measure the particles directly and distinguish individual elements precisely.

Iron is a particularly useful element to analyze, explains Nick Cannady, a postdoctoral researcher with CSST and NASA Goddard Space Flight Center and former PhD student at LSU. On their way to Earth, cosmic rays can break down into secondary particles, and it can be hard to distinguish between original particles ejected from a source, like a supernova, and secondary particles. That complicates deductions about where the particles originally came from.

“As things interact on their way to us, then you’ll get essentially conversions from one element to another,” Cannady said. “Iron is unique, in that being one of the heaviest things that can be synthesized in regular stellar evolution, we’re pretty certain that it is pretty much all primary cosmic rays. It’s the only pure primary cosmic ray, where with others you’ll have some secondary components feeding into that as well.”

“We didn’t expect that the nuclei – the carbon, oxygen, protons, iron – would really start showing some of these detailed differences that are clearly pointing at things we don’t know,” Cherry said.

The current data set based on five years of exposure has allowed CALET to directly measure the rare flux of cosmic rays up to energies of 2 trillion electron volts per nucleon.  CALET has been approved to continue operating at least through 2024.

The latest finding creates more questions than it answers, emphasizing that there is still more to learn about how matter is generated and moves around the galaxy.

“The study of cosmic rays is the study of how the universe generates and distributes matter, and how that affects the evolution of the galaxy,” Krizmanic adds. “So really it’s studying the astrophysics of this engine we call the Milky Way that’s throwing all these elements around.”

Direct Measurement of the Cosmic-Ray Carbon and Oxygen Spectra from 10 GeV/n to 2.2 TeV/n with the Calorimetric Electron Telescope on the International Space Station, O. Adriani et al., Phys. Rev. Lett. 125, 251102 (2020).