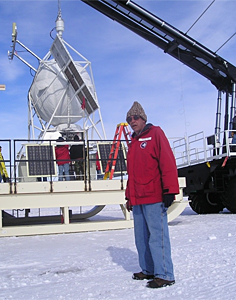 Fellow of the American Physics Society

Our High Energy Astrophysics research attempts to understand the nature and origin of energetic charged particles through measurements of galactic cosmic radiation (GCR) and solar energetic particles (SEP), and their access into our Geospace environment. The GCR represent the only sample of matter from outside our solar system available for direct study, and comparing their composition to the sun, meteorites, stars, solar flares, and the interstellar medium provides insight into the origin of this matter. Since particle transport is controlled by electromagnetic effects, and subject to nuclear interactions, we also conduct experiments at accelerators. Currently, we are finishing the balloon campaign for ATIC -- (Advanced Thin Ionization Calorimeter), which measured the GCR composition and energy spectra up to 100 TeV, flying from McMurdo, Antarctica, and circumnavigating the continent. ATIC had three successful flights and final data analysis is underway. The group worked on the (non-selected)ACCESS project, a combination calorimeter/transition radiation detector for the Space Station and is currently working with an international team on CALET (CALorimetric Electron Telescope). CALET will be launched by the Japanese HTV system and placed upon the Exposed Facility attached to the Japanese Kibo module on the Space Station. Wefel is also the statewide director for LaSpace, the Space Grant program, and for NASA EPSCoR in Louisiana and, in addition, he co-directs the International School of Cosmic Ray Astrophysics.