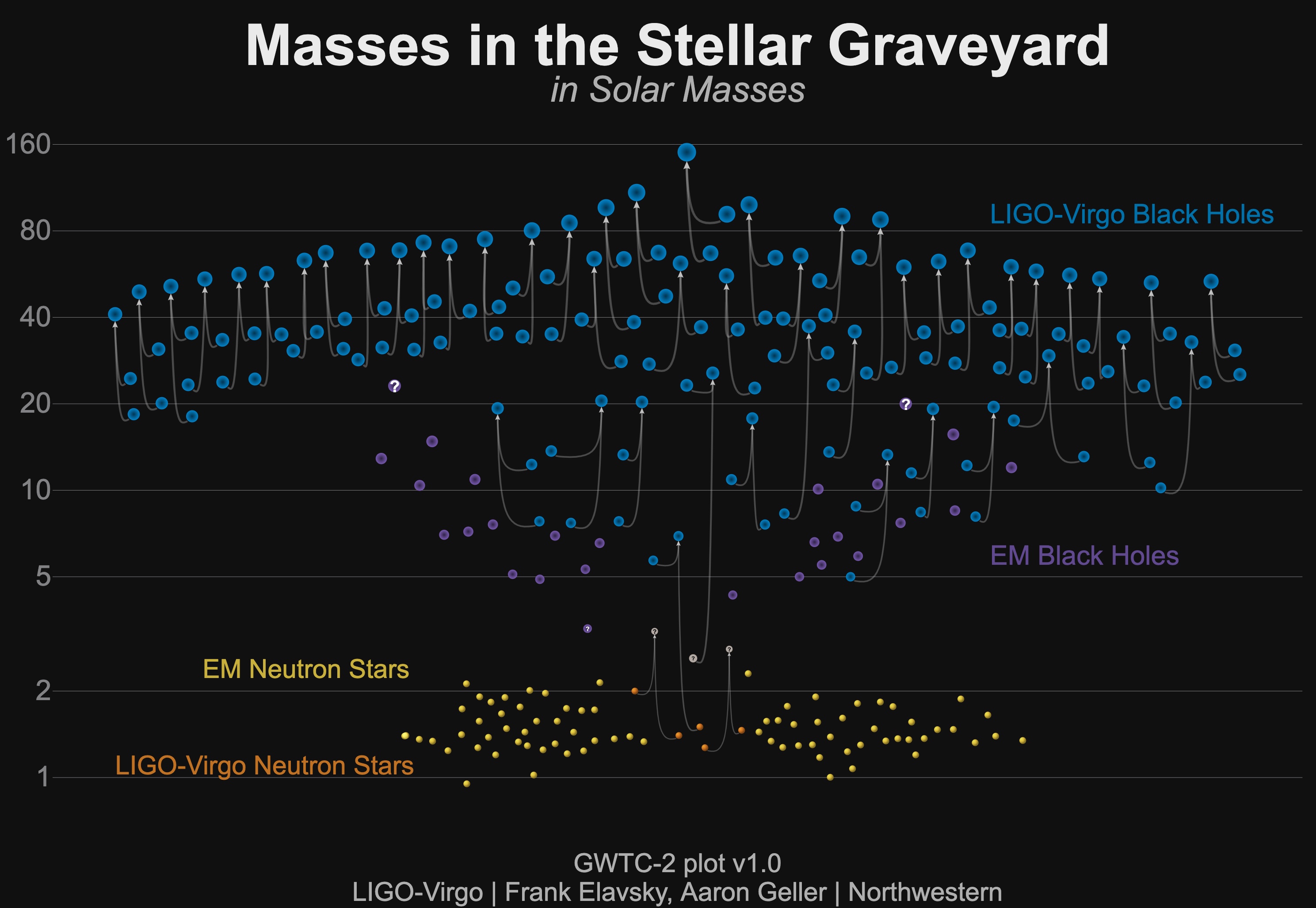 The second catalog of gravitational wave events "GWTC-2", was published today. Since September 2015, LIGO/Virgo have detected 50 gravitational waves, including 39 new ones just from the first half of O3. This graphic illustrates the current total number and masses of LIGO/Virgo black hole and neutron star merger events (in blue) compared with previously known black holes (in purple). Mergers are indicated by arrows connecting two progenitor objects with a final merged object of higher mass.
LIGO-Virgo / Northwestern U / Frank Elavsky & Aaron Geller

After several months of thorough analysis, the LIGO Scientific Collaboration and the Virgo Collaboration have released an updated catalog of gravitational wave detections. The catalog contains 39 new signals from black-hole or neutron-star collisions detected between April 1-Oct. 1, 2019, which more than triples the number of confirmed detections. The new set includes some of the most interesting systems seen so far, and enables qualitatively new studies of astrophysical populations and fundamental physics.

The sharp increase in the number of detections was made possible by significant improvements to the instruments with respect to previous observation periods. These included increased laser power, improved mirrors and, remarkably, the use of quantum squeezing technology. All together, these enhancements resulted in a roughly 60 percent improvement in the range to which signals can be detected.  The detectors were also able to operate without interruption more often than in the past, with an improved duty cycle of about 75 percent, versus about 60 percent previously.

“As an instrument scientist, your focus is on making the instrument better all the time. So even when the instrument is observing, we’re looking at the data coming out of it to see if there is noise somewhere we don’t expect there to be,” LSU Department of Physics & Astronomy PhD candidate Corey Austin, who works at LIGO Livingston with his advisor and Observatory Head Joseph Giaime.

With all of the new signals, the scientific community can begin to better understand the populations of black holes and neutron stars. Analyzing the entire population of binary black hole mergers simultaneously can maximize the astrophysical information extracted. It is inferred that the distribution of black hole masses does not follow a simple power-law distribution. Measuring the deviations from this power law will improve the ability to learn about the formation of these black holes, either as the result of stellar deaths or previous collisions.  Considering the entire population together also helps make stronger measurements of difficult-to-measure properties such as black hole spin. Some merging black holes have spins which are misaligned with their orbital angular momentum. This will help probe the regimes in which these binaries formed.

The many signals in the updated catalog will put Einstein’s theory of gravity to the test in more and better ways than before. This was done by comparing the data against predictions from the theory and constraining possible deviations. The results from multiple signals were combined using new statistical methods to obtain the tightest constraints so far on the properties of gravity in the strong, highly-dynamical regime of black hole mergers.  With the new catalog, LIGO and Virgo were also able to directly study the properties of the remnant objects produced during the mergers: by measuring the vibrations of these objects, and by ruling out potential “echoes” after the main signals, LIGO and Virgo confirmed that the remnants behaved as expected from black holes in Einstein’s theory.

“We still need to know more about the universe. Just think of how we discovered new elements, which are now common knowledge,” said LSU Post-doctoral Researcher Guillermo Valdes, who works at LIGO Livingston as part of the team, led by LSU Boyd Professor Gabriela González, constantly improving the sensitivity of the instrument.

The results reported in the new catalog at ligo.org correspond to only the first six months of LIGO and Virgo’s third observing run. Results from the remaining five months are currently being analyzed. In the meantime, the LIGO and Virgo instruments are undergoing upgrades in preparation for the fourth observing run, for which they will be also joined by the KAGRA detector in Japan. More exciting discoveries are on the horizon.

A science summary of the entire GWTC-2 catalog paper can be found here: ligo.org/science/Publication-O3aCatalog/index.php

More detail on the first LIGO/Virgo gravitational wave transient catalog (GWTC-1) can be found in these two papers: