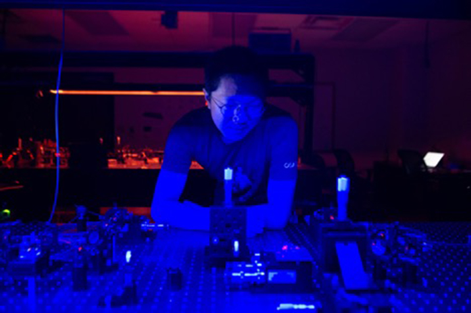 Chenglong You, a postdoctoral researcher in the LSU Department of Physics and Astronomy, was recently named as a recipient of the 2019 Emil Wolf Outstanding Student Paper Competition. The first award winner from Louisiana, You was awarded a $300 cash prize and a complimentary three-year OSA student-membership after presenting his paper on multiphoton quantum metrology in Washington, D.C.

Dr. You’s paper, titled “Multiphoton quantum metrology without pre- and post-selected measurements,” features his research in demonstrating the first protocol for quantum-enhanced phase estimation without conditional measurements. This research, conducted by an experimental quantum photonics team lead by Dr. Omar Magaña-Loaiza, is also related to the work featured in Nature's NPJ Quantum Information and on Phys.org.

“This is the first time in Louisiana’s history that a student has won this esteemed award,” said Magaña-Loaiza. “Currently, Chenglong is doing experimental research in the Quantum Photonics Laboratory on multiphoton quantum technologies for imaging, metrology and information processing. He received this prize for his experimental work on quantum metrology, demonstrating the potential of quantum multiphoton states to measure small longitudinal displacements with a sensitivity that cannot be achieved with regular laser light.”

As a PhD student under Dr. Jonathan Dowling, You formed the OSA student chapter at LSU and was elected the chapter’s first president. After graduating in 2019, he chose to come back to LSU as a Postdoctoral Researcher under Dr. Magaña-Loaiza, an assistant professor of physics.

The Emil Wolf Outstanding Student Paper Competition was created in 2008 to honor the contributions of its namesake to The Optical Society. Winners of the paper competition are selected based on their presentations of their research during Frontiers in Optics (FiO) annual meeting.