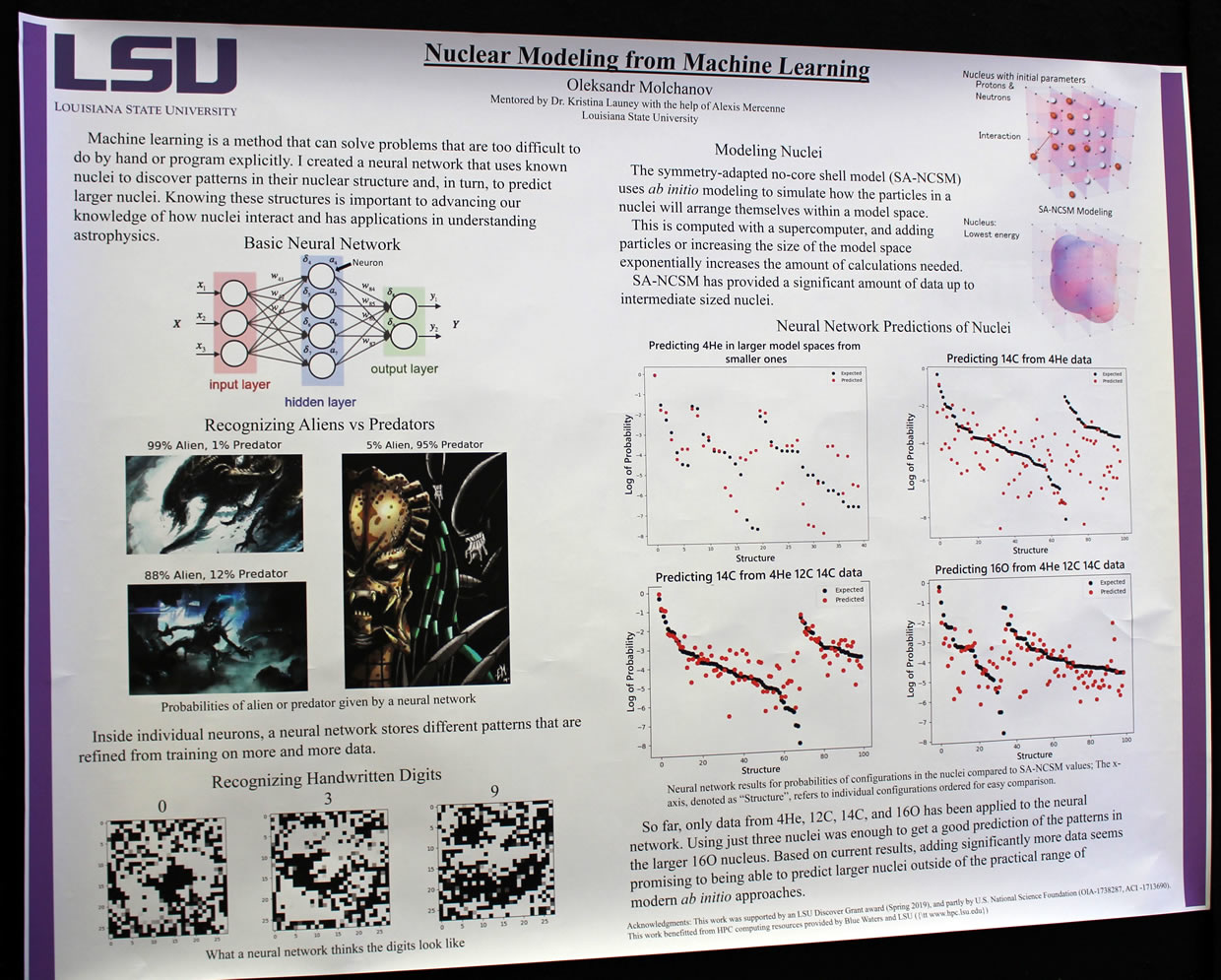 LSU Physics undergraduate student Oleksandr Molchanov was recently awarded one of sixteen LSU Discover grants to conduct research on the use of machine learning in atomic nuclei modeling. Molchanov uses neural networks to find patterns in data from models of small nuclei, and predicts properties of larger nuclei based on his results.

“My research is primarily programming, so I will be doing it anywhere I have access to a computer – mostly on campus. The research is going to be done over the course of this semester, but it may potentially continue afterwards depending on the progress that is made,” said the Belle Chasse native.

“We currently have the symmetry-adapted no-core shell model (SA-NCSM), developed by my mentor Dr. Kristina Launey and her associates, to model nuclei; however, for large sized nuclei the computational power required becomes immense, making it impractical to get results in a timely manner. My aim is to use neural networks to find patterns in the data from models of smaller nuclei. This information can then be used in SA-NCSM to significantly reduce computational power needed to get complete descriptions of larger nuclei and to predict their properties,” Molchanov said.

"Oleksandr will work on a machine learning project with the aim to detect patterns in large-scale simulations of atomic nuclei. Such patterns are key to better understanding the physics of nuclei, and to study, in turn, astrophysical processes such as the formation of the elements in the Universe. Oleksandr was one of the best students in my Computational Science class last fall, and I am confident that there is an opportunity for new discoveries as he merges first-principle nuclear simulations with innovative computational algorithms," said his mentor, who encouraged him to apply for the Discover grant.

Molchanov was drawn to his research topic due to his interest in neural networks and his lifelong desire to understand how “literally everything works.” He chose to come to LSU because of the reputation of the Physics and Astronomy department, and the unique opportunities the school gives students to connect with professionals in physics and researchers at places like the Laser Interferometer Gravitational-Wave Observatory (LIGO).

When he is not in the lab or programming for his research, Oleksandr can be found in a dojo practicing as a third-degree black belt in Taekwondo. Having practiced the Korean martial art for nine years, Molchanov is a certified instructor and says that it is his “main obsession apart from physics and space.”

Oleksandr believes that the small nuclear structures he is modeling, once better understood, will have many future applications. He is confident that his time at LSU will position him to be able to go on to conduct cutting edge research, professionally, so that he may transform human understanding of the universe.