LSU Museum of Natural Science’s Curator of Fishes Prosanta Chakrabarty has recently been named president of the American Society of Ichthyologists and Herpetologists (ASIH). He will serve as president-elect in 2022 and then as president in 2023.

"I am really proud to be part of ASIH leadership again, especially at this critical time when taxon-focused scientific societies are losing members," said Chakrabarty, who is also a professor in the Department of Biological Sciences. "I want to keep the Society fun and scientifically engaging while also being safe, welcoming, and affordable for everyone interested in herps (amphibians and reptiles) and fishes. I'm really honored that the membership entrusted me with this role and can't wait to get started."

The ASIH is one of the oldest natural history focused scientific societies in the country and is dedicated to the scientific study of fishes, amphibians, and reptiles. This distinguished organization was first established in 1913 and currently has about 1,500 members composed of mostly professional scientists and students.

Over the course of his academic career, Chakrabarty has traveled to more than 30 countries and has described more than a dozen new fish species. Chakrabarty is a Fulbright Distinguished Chair, a Senior Fellow at TED and an Elected Fellow of the American Association for the Advancement of Sciences, the world’s largest general scientific society.

Chakrabarty has been a member of ASIH since 1999 and has most recently served as its secretary from 2016 until 2020. As the president-elect, he will serve as an ex officio member on all ASIH committees. 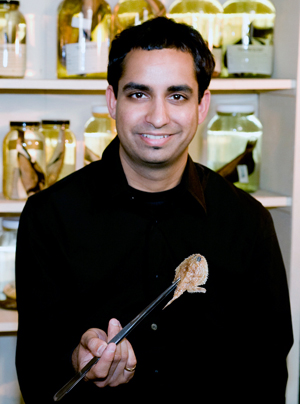