The Role of Higher Education in Criminal Legal Reform 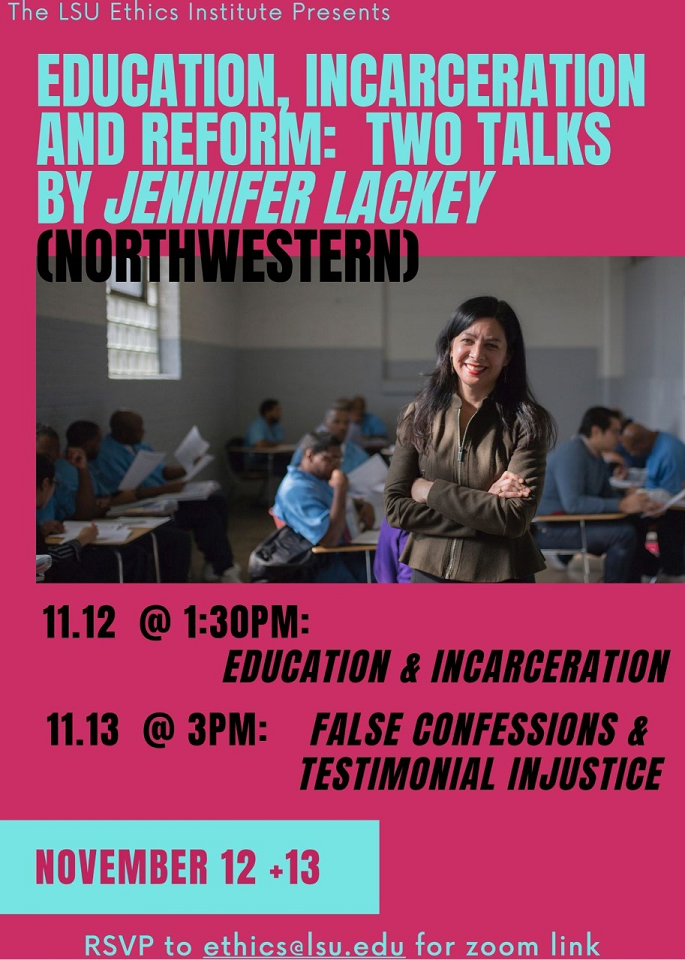 The results of the U.S. experiment with mass incarceration have been morally and fiscally disastrous. According to conservative estimates, the United States incarcerates 2.3 million individuals. At 716 per 100,000, it has the highest rate of incarceration of any country globally, due, in part, to some of the most punitive sentencing practices in the world. Without realistic paths to social re-entry, rates of recidivism are exceptionally high.1 As troubling as these national statistics are, the situation in the State of Louisiana is even more dire.

Americans are increasingly willing to acknowledge the failures of the criminal justice system. Today, there is healthy bipartisan agreement that the criminal legal system must be reformed. In December 2018, President Trump signed the First Step Act into law.2  But, as the name suggests, changes in federal law are only a first step to addressing the crisis of mass incarceration and recidivism in the United States.

In her first talk (Thursday, November 12), Dr. Jennifer Lackey, the Wayne and Elisabeth Jones Professor of Philosophy, will discuss the role of education in stemming recidivism. (Studies show there is a 43 percent reduction in the recidivism rate for prisoners that partake in education programs.) This talk will take place at 1:30 pm.

In her second lecture (Friday, November 13), Dr. Lackey will focus on the phenomenon of false confessions. As she notes in her recently published law review article, “False Confessions and Testimonial Injustice”, since 1989, more than a quarter of post-conviction DNA exonerations in the United States involved false confessions.” Yet, confessions continue to be the gold standard of evidence by juries and prosecutors. To understand why we give an excess of credibility to coerced confessions, she argues, we have to see belief in false confessions as a distinctive form of testimonial injustice. This talk will take place at 3:00 pm.

The LSU Ethics Institute invites the LSU community and beyond to participate in this critical discussion. To RSVP for either of these talks, please email ethics@lsu.edu.

1 In one study of former federal prisoners, 83% were rearrested within 10 years of release. At any given time, some 80,000 individuals are in solitary confinement—disproportionately those who lack a high school diploma and identify as LGBTQ+ prisoners.

2 (With similarly strong bipartisan support, Governor John Bel Edwards signed a criminal justice bill in law in 2017).
(Studies show there is a 43 percent reduction in the recidivism rate for prisoners that partake in education programs).