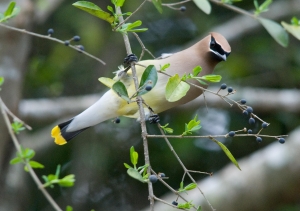 The LWBA program hopes to generate maps of relative abundance of birds in the state during late winter. To do this, we borrow the familiar, standard CBC methodology in terms of party-hours and party-miles to generate indices of relative abundance, and apply these to 7.5 quad grid cells, which are roughly 35% as large as a CBC circle. We think that a minimum of 20 party-hours (total; not necessarily all in same day) is necessary to characterize a quad. These can be distributed in any way within the 6-week survey period (over the life-span of the project). In fact, the same areas can be resampled multiple times as long as the numbers of birds are calibrated by party-hours and party-miles.

The general idea, at least for the quad compilers, is to treat the quad survey as a small, square CBC circle and sample accordingly to produce the standard, familiar "birds/party-hour" data on relative abundance.

Data-entry and display will all be online, in partnership with the eBird program at Cornell Laboratory of Ornithology.

This survey method combines the grid approach of an atlas with the effort-calibrated approach of the CBC. Breeding Bird Atlases typical provide only presence/absence data and do not provide information on relative abundance. Therefore, they cannot be used to assess differences in relative abundance within a state nor long-term population trends. CBC methodology, in contrast, permits this by calibration of all field data by party-hours, a technique familiar to all birders. The problem with using CBC circles for atlasing is that they are too few and too irregularly distributed geographically. Furthermore, the CBC period is too early in winter, and may not adequately reflect "true" winter populations. The CBC time period is not only short but also conflicts severely with major holidays. Also, CBC circles are so large (ca. 175 sq. miles) that covering them thoroughly requires substantially more effort relative to the roughly 62 sq. miles of a 7.5 quad. Finally, in contrast to atlasing efforts, dates for individual CBCs are set in advance and are essentially irrevocable once set regardless of bad weather; they are also restricted to a single 24-hr period. The method proposed here blends the strengths of both atlas and CBC methods and minimizes their weaknesses.

Each quad has a compiler responsible for doing surveys and submitting data. Each compiler is encouraged to recruit qualified help to survey their quad. Data gathered within the quad by observers other than the compiler are submitted directly to eBird but are eventually filtered by the compiler before adding to the official database.

A survey consists of a bird count, CBC-style with respect to keeping track of numbers of individual birds, party-hours, party-miles, and rough habitat coverage.  For mapping in the atlas, a quad needs at least 20 party-hours of surveying, hopefully more, over the 4-year lifespan of the project.  Those hours can be distributed over any number of days within the official "winter atlas" period.  Thus, flexibility in survey dates allows avoidance of bad weather, and also permits a single observer to cover different sections of a quad on different days.  An ideal survey might consist of the compiler organizing 2-4 teams to survey sections of the quad on a single day, CBC style.  As long as party-hour and party-mile data are recorded, the fundamental unit of the atlas, namely birds/unit effort, remains intact (daytime only – no owling – see FAQ).  Repeat surveys of the same spots on different days are also possible, again as long as the data are calibrated by effort.  However, do not bias a quad’s data by too many counts from a single spot, e.g., your yard – limit those to say 4-5 representative counts/year.  Other than excessive single-point sampling, surveys can be conducted as often as resources permit.  Do not do surveys during bad weather to minimize "weather effects" on detection rates. Just use birding common sense, e.g., do not do surveys of woodland landbirds when it’s so windy that you can’t hear or see them … in other words, keep in mind that the goal is to make the critical unit for comparing relative abundance, namely birds/party-hr, as representative as possible and void biasing this downward by surveying in bad weather.  Also, use birding common sense again to get out as early in the day as possible, when detection rates peak.

Quads that don’t reach the 20-phr threshold might not be mapped individually, but the data will be used, even if only a single 1-hour sample, for broader regional comparisons and inter-annual comparisons.  No data are discarded.  We are seeking funds to hire “mercenaries” to boost phrs in quads that haven’t made it to the 20 phr threshold.  We also may be able to map quads that have reached only 10 party-hours in analyses of common, widely distributed species.

The minimum unit for data-entry in terms of time period would be 1 hour. This minimizes the biases of brief sample periods. Once that threshold is reached, all additional time counts toward the total, even if not continuous with the first hour. As with CBC methods, avoid counting same birds more than once in same day.

The Louisiana Winter Bird Atlas has its own data-entry page at eBird:

You have to register first if not already an eBird registrant.

at Step 2, go to "Find it by Quad, City ... " and check the box at the bottom for list of quads. This may be easier than 2b above, but eBird would prefer you use 2b.

BE SURE TO SPECIFY AN INDIVIDUAL QUAD FOR YOUR DATA ... OTHERWISE THEY DO NOT GO INTO THE LWBA DATA-BASE.

Then, enter your bird data by following the instructions.  Put your locality details in the Comments box for reference.  If you have problems, let me or Richard know; this is a novel program for eBird, so we're still working out the problems.  If you don't have computer access, just send your survey data to us, and we will enter it for you.

Start: 10 January.  This avoids the traditional CBC period and also coincides with the empirical observation that many "half hardy" species seem to disappear after early January.  To some degree, the latter is an artifact of CBC period coverage, but not entirely.

End: 20 February.  With Purple Martins arriving in mid January, some waterfowl beginning to leave in late January, and some residents nesting in January, there is no such thing as a "stable" winter period for the entire avifauna.  Late February leaf-out for many trees in southern Louisiana certainly sets a late limit.  An "end" date of 20 Feb. extends the period as long as possible without major departure of most winter residents.  This may not apply to waterfowl, but waterfowl are not among the species for which this sort of survey is best suited.

The atlas will consist of maps of the state for each species with each quad coded for relative abundance of that species in perhaps 4-6 shades of the same color.  The relative abundance scale can vary among species, as can the unit of analysis (e.g., birds/party-hr on foot, birds/party-hr by car, etc.). [Details not important until we have a better feeling for the data.]

Northern Interior = north of 31o 30' (but also south of that latitude to include southern extremes of Sabine, Natchitoches, Grant, LaSalle, Catahoula, and Concordia). This line corresponds roughly to the boundary between USDA Plant Hardiness Zones 8a and 8b. When divided into "western" and "eastern" sections, the boundary is arbitrarily placed at the eastern boundaries of Union (e.g., Ouachita R.), Jackson, Winn, and Grant parishes, and thus the western boundaries of Morehouse, Ouachita, Caldwell, and LaSalle parishes.

Southern Interior = between the Northern Interior and Coastal Zone. When divided into "western" and "eastern" sections, the boundary is arbitrarily placed at the eastern boundaries of Rapides, Evangeline, St. Landry, and St. Martin parishes, and thus the western boundaries of Avoyelles, Pte. Coupee, Iberville, and Assumptionparishes; thus the Atchafalaya River roughly corresponds to the boundary.

Coastal Zone = from the coastline and southern shore of Lake Pontchartrain to about 25 miles inland; also coastal islands, including the Chandeleur chain. [Thus, examples of towns considered within the Coastal zone are Hackberry, Abbeville, New Iberia, Franklin, Morgan City, New Orleans, LaPlace, Reserve, and Slidell; and towns just north of the Coastal Zone are Holmwood, Lake Arthur, Gueydan, Kaplan, St. Martinville, Thibodaux, Donaldsonville, and Mandeville. For convenience, we use the political boundaries of the following coastal tier parishes to delimit the Coastal Zone even if they include some area beyond the 25 mile limit: Cameron, Iberia, St. Mary, Terrebonne, Lafourche, Jefferson, Plaquemines, St. Bernard, Orleans, St. Charles, St. John the Baptist, and St. James. This leaves Vermilion and St. Tammany as the only two parishes split between Coastal and Southern Interior. When divided into "western" and "eastern" sections, the boundary is arbitrarily placed at the Iberia/St. Mary boundary.

Offshore = Gulf of Mexico, more than 1 mile from the beach.