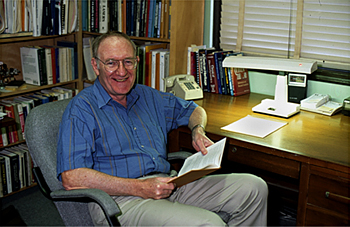 For many years and with a variety of collaborators, especially G. W. Ford (University of Michigan), I have been studying dissipative and fluctuation phenomena in quantum mechanics and related applications. Our emphasis has been on fundamental questions in quantum theory with special emphasis on decoherence, entanglement and superposition (Schrödinger cat) states particularly pertaining to the areas of quantum measurement, information, teleportation, cryptography and computation, as well as the quantum-classical interface. More recently, we have been studying fundamental questions relating to measurement of quantum probability distribution functions with potential applications to a wide variety of nano and quantum information systems, with emphasis on how their entanglement properties vary with time. In addition, we are using the generalized quantum Langevin equation to explore recent topical questions in non-equilibrium statistical mechanics (particularly claims that the fundamental laws of thermodynamics may be violated in the quantum regime), and in particular, we have presented an exact solution to the radiation reaction problem.

Motivated by the discovery of a unique double pulsar system, I have recently returned to a serious study of an area in which I worked for many years viz. spin effects in gravitational theory and its relevance for hidden momentum.