For decades, scholars have believed that the quantum statistical properties of bosons are preserved in plasmonic systems, and therefore will not create different form of light. 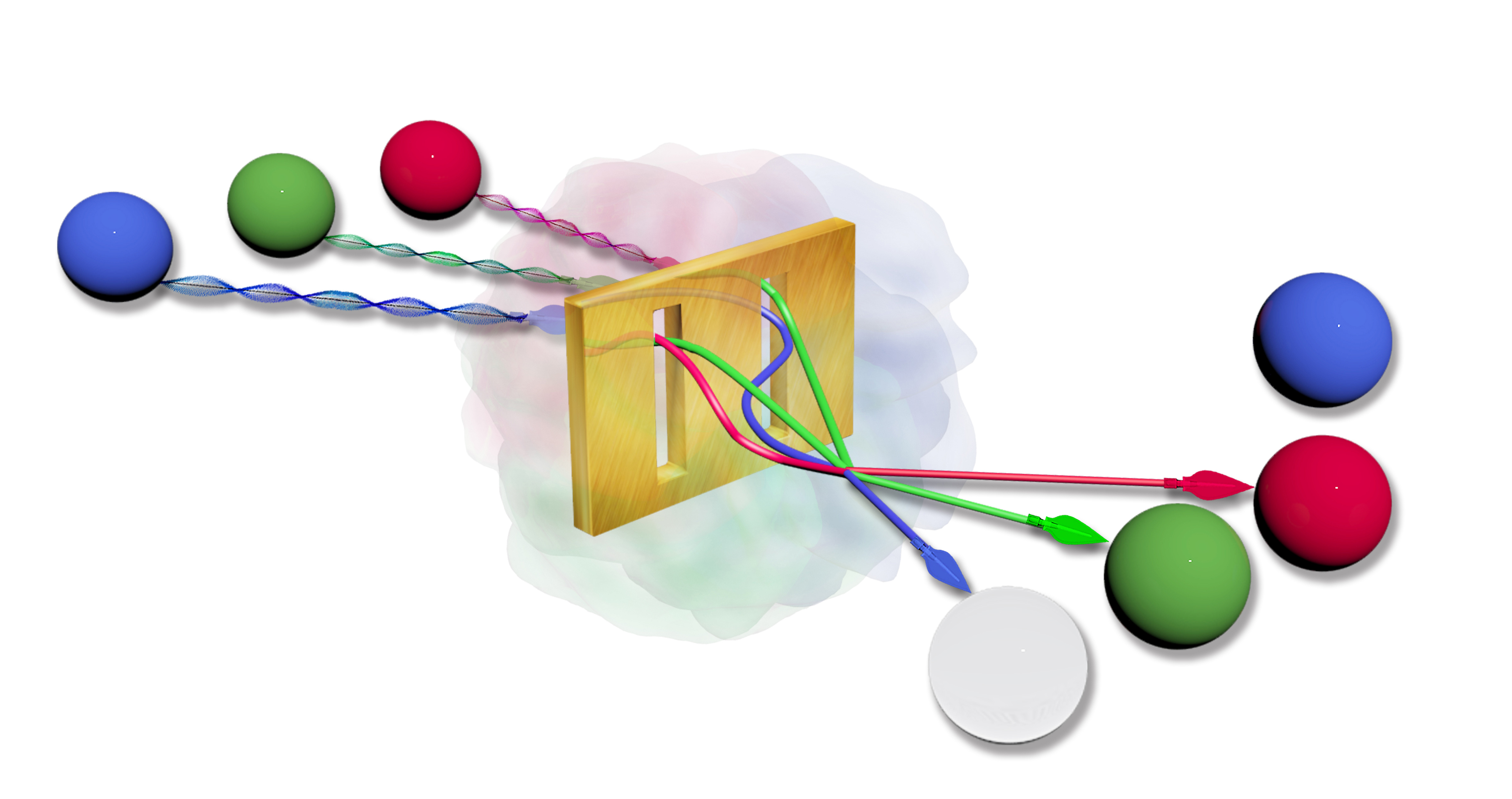 The diagram illustrates the concept of multiparticle scattering mediated by optical near fields. The additional interference paths induced by confined near fields lead to the modification of the quantum statistics of plasmonic systems. This idea is implemented through a plasmonic multi-slit structure. The looped trajectories represent additional scattering paths induced by confined optical fields in the plasmonic structure.
Graphic by Mingyuan Hong

This rapidly growing field of research focuses on quantum properties of light and its interaction with matter at the nanoscale level. Stimulated by experimental work in the possibility of preserving nonclassical correlations in light-matter interactions mediated by scattering of photons and plasmons, it has been assumed that similar dynamics underlie the conservation of the quantum fluctuations that define the nature of light sources. The possibility of using nanoscale system to create exotic forms of light could pave the way for next-generation quantum devices. It could also constitute a novel platform for exploring novel quantum phenomena.

In new findings published in Nature Communications, researchers from Louisiana State University and four collaborating universities have introduced a discovery that changes a paradigm in quantum plasmonics by demonstrating the potential of metallic nanostructures to produce different forms of light.

Their paper, "Observation of the Modification of Quantum Statistics of Plasmonic Systems," written by collaborators from the University of Alabama in Huntsville, Tecnologico de Monterrey, Universidad Nacional Autónoma de México and Universidad Autónoma Metropolitana Unidad Iztapalapa, demonstrates that the quantum statistics of multiparticle systems are not always preserved in plasmonic platforms. It also describes the first observation of the modified quantum statistics.

“We engineered metallic nanostructures, fabricated in gold, to produce different kinds of light,” Hong said. “Our nanoscale platform exploits dissipative plasmonic near fields to induce and control complex interactions in many-body systems of photons. This capability allows us to control at will the quantum fluctuations of multiphoton systems.”

“For example, our platform enables the reduction of the quantum fluctuations of multiphoton systems to boost the sensitivity of protocols for quantum sensing,” Magaña-Loaiza said. “In our lab, we will exploit this exquisite degree of control to develop quantum simulations of light transport (see https://www.lsu.edu/research/news/2021/0120-quantumsolar.php). This will enable the eventual design of better and more efficient solar cells.”

This research was supported by the U.S. Department of Energy.

The Quantum Photonics Group in the Department of Physics and Astronomy at LSU investigates novel properties of light and their potential for developing quantum technologies. The team also conducts experimental research in the fields of quantum plasmonics, quantum imaging, quantum metrology, quantum simulation, quantum communication, and quantum cryptography.