LSU Researchers Advance Our Understanding on the Formation of the Universe 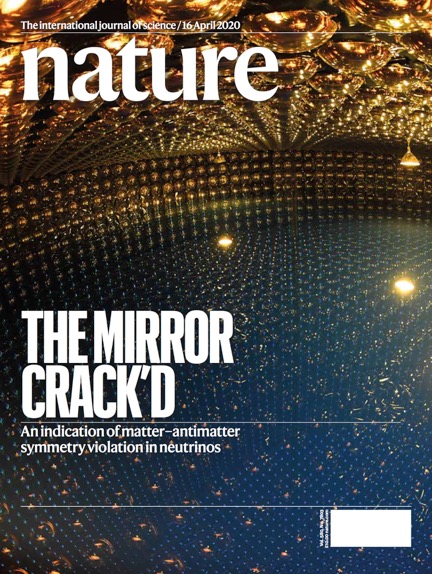 BATON ROUGE – Hints of a difference between the fundamental behavior of neutrinos and of antineutrinos, their anti-matter counterparts, are reported in the scientific journal Nature this week. These observations from the T2K experiment which includes the Super-Kamiokande detector in Japan may have implications for our understanding of the formation of the Universe, if confirmed.

It is thought that finding asymmetry in the physical properties of neutrinos and antineutrinos may help us understand the origin of the current prevalence of matter over antimatter in the Universe. This asymmetry is known as charge-conjugation and parity reversal, or CP, violation.

In this week’s cover feature published in Nature, LSU Department of Physics & Astronomy Professor Thomas Kutter and his team of researchers describe their involvement in the T2K collaboration. The LSU team who has been involved in this work includes Kutter, Associate Professor Martin Tzanov and Postdoctoral Researcher Siva Prasad Kasetti.

The team at LSU has been a member of the T2K collaboration since 2004 and has developed and built components of the near detector, contributed to numerous data analyses and serves in leadership roles to collect, analyze and publish the neutrino oscillation data sets.

“Our new results on restricting possible values of the neutrino CP phase, which parameterizes the matter/antimatter symmetry, are based on a collaboration wide effort over nearly a decade of collecting data,” Kutter said.

The T2K Collaboration used the Super-Kamiokande detector to observe neutrinos and antineutrinos generated 295 kilometers away at the Japan Proton Accelerator Research Complex, or J-PARC. As neutrinos travel through the Earth, these particles oscillate between different physical properties known as flavors. The T2K collaboration found a mismatch in the way neutrinos and antineutrinos oscillate by recording the numbers that reached Super-Kamiokande with a flavor different from the one they had been created in.

“LSU students, research staff and faculty operated and maintained the experiment, inspected the resulting data in great detail before extracting information on the neutrino CP phase in a complex analysis that brings all the detailed pieces of information together in a consistent picture,” Kutter said.

After analyzing nine years’ worth of data, the T2K experiment reached a level of statistical significance high enough to provide an indication that CP violation occurs in these fundamental particles. More precise measurements are needed to confirm these findings. However, these measurements do strengthen previous observations and pave the way towards a future discovery. A new generation of experiments under construction might provide an answer to the problem of the missing antimatter in the next 10 years.

“It has not always been easy along the way, but it is very exciting to push the boundaries of knowledge and we are currently working on further improvements to see what we can reveal about neutrino properties with more data and improved analysis techniques,” Kutter said.

A noteworthy step forward in the T2K experiment, their paper, titled “Constraint on the matter-antimatter symmetry-violating phase in neutrino oscillations” is featured as the Nature cover story.

A fundamental question about the formation of the Universe is how there came to be more matter present than antimatter. It is thought that this disparity is related to a violation of fundamental physics. The laws of physics are essentially symmetrical – what holds true for matter particles in our Universe should also be true for antimatter particles in a mirror universe. But this is not always the case, and it has been shown that quarks do not behave in quite the same way as their mirror-image antiquarks. Such symmetry violation – known as charge-conjugation and parity reversal, or CP, violation – has not yet been demonstrated for leptons, the class of fundamental particle that includes electrons, muons and neutrinos. This issue sees a substantial advance in the search for this violation, as the T2K Collaboration reports measurements on discrepancies between neutrinos and antineutrinos with a 99.7 percent confidence level, leading to an indication of CP violation at the 95 percent confidence level. Using the Super-Kamiokande detector (pictured) to capture neutrinos emitted 295 kilometres away at the J-PARC accelerator complex in Tokai, Japan, the team determined that the probability for a muon neutrino to become an electron neutrino seems to be different from that of a muon antineutrino to become an electron antineutrino, thereby providing an indication of CP violation in leptons. If confirmed by more precise measurements in the future, this violation may help point the way to an explanation of how excess matter was formed in our Universe. Cover image: Kamioka Observatory, Institute for Cosmic Ray Research, University of Tokyo.