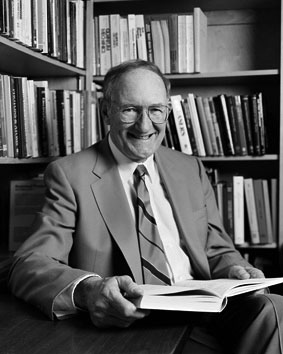 Emeritus Boyd Professor Dr. Robert O’Connell is originally from Ireland and received his undergraduate degree from the National University of Ireland Galway, which also awarded him a doctorate of science degree later on. After working four years as a telecommunications engineer, he came to the US in 1958 and got his Ph.D. in theoretical physics from the University of Notre Dame. In his 53-year career at LSU, Dr. O’Connell has made countless contributions to many areas of physics and astronomy.

LSU College of Science: What led you to LSU?

Robert: When I was in Ireland, I was working at the Dublin Institute for Advanced Studies as a postdoctoral researcher. While I was waiting to get an academic position, I heard from the US. LSU made a very attractive offer for an assistant professorship. I was looking at other possibilities, but a big advantage of coming here at the time was it was a warm place to live after experiencing the winters in Notre Dame.

LSU College of Science: You have a more than 50 year relationship with LSU. What was it about LSU that moved you to stay here for this amount of time and establish roots here?

Robert: The LSU Department of Physics and Astronomy when I came here was quite small. The total faculty numbered a single dozen, which is now 5-6 times larger. It was very small but very friendly and welcoming. The department was also taking very concrete steps to make significant progress. Everything about the place was very positive and that enabled me to stay here.

LSU College of Science: Tell us about your contribution to the success of the space mission Gravity Probe B that was launched by NASA.

Robert: One of my first research projects at LSU was working with Bruce Barker from the University of Alabama. We were the people who did the first calculations of the two-body problem in general relativity for spinning bodies. Our work with Gravity Probe B also focused on a gyroscope, which of course was spinning. We were interested in measuring how much it had spun. The recent publications by Laser Interferometer Gravitational-Wave Observatory (LIGO) (Check out LSU’s work with LIGO!) and Virgo have used our paper as the forerunner of their calculations.

Dr. John DiTusa is the Chair of the LSU Department of Physics and Astronomy and has worked with O’Connell since he arrived here as an assistant professor back in 1994. He nominated Dr. O’Connell for this honor.

LSU College of Science: What is his most recognized work?

John: I think Dr. O’Connell’s most recognized work is his work on the quantum langevin equation. The quantum langevin equation is a way of describing nature where you’re trying to describe how a macroscopic particle responds to an enormous number of microscopic degrees of freedom. Because it’s so fundamental, it’s a real pillar of statistical mechanics that can be used in all sorts of different fields. His fundamental work in this area attracted over 400 citations, and that’s not even his most cited work. But I think it’s a really important piece of work that I’m sure he’s very proud of.

LSU College of Science: Why did you nominate Dr. O’Connell for induction into the HOD?

John: I nominated Robert O’Connell for induction into the Hall of Distinction because I think it’s important to recognize his 53 years of service to LSU. That’s incredible! It’s a lifetime of achievement and dedication to the Department of Physics and Astronomy, the College of Science and the University as a whole.

LSU College of Science: In your opinion what is Dr. O’Connell’s most recognized work?

Dr. Jorge Pullin, Horace Hern Chair in Theoretical Physics at LSU: Remarkably, he’s the only person I know, in fact, that has contributed in various subfields of physics, ranging from the motion of binary neutron stars like the ones that LIGO observed last year to noise in the instrument itself, to quantum mechanics to statistical mechanics. He has co-authored a review paper, which has close to 3,000 citations, with famous Nobel Prize winner Eugene Wigner, just to give you an example.

LSU College of Science: How has his work brought prestige to the Physics and Astronomy Department at LSU?

Jorge: Because many of his contributions are well-known in different subfields of physics, he is well-known. That has brought a lot of prestige to the department in ways that I don’t know if anyone else has.

Gallery of O'Connell Hall of Distraction