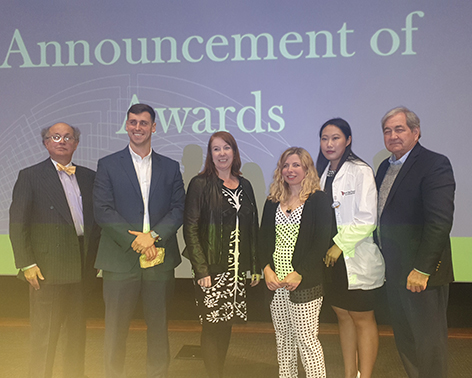 On November 15, Maggie Furtner (third from right), a second-year MA student in Anthropology won the People’s Choice Award at the 2019 Three Minute Thesis (3MT) Competition held at LSU’s Digital Media Center.  Maggie presented her thesis research entitled “Comparing the Accuracy of Close-Range Photogrammetry to microCT Scanning via Surface Deviation Analysis of 3D Digital Models of Hominin Molars.” Under the direction of Assistant Professor Juliet Brophy, Maggie’s research assesses the accuracy of a lesser-utilized 3D scanning methodology called close-range photogrammetry. Photogrammetry is a scanning technique that creates 3D models by compiling a series of 2D photographic images. In paleoanthropology, other scanning methods are often utilized to create models of fossil hominin remains, such as CT and laser scanning. However, these more popular methods pose some accessibility issues – CT scanning is very time consuming, requires the transport of fragile remains, and uses very expensive equipment. Furthermore, CT scanning introduces fossils to doses of radiation which can affect ESR dating. Photogrammetry, on the other hand, is a less invasive method that requires less expensive equipment and time.

To determine if close-range photogrammetry can be used as a viable alternative scanning method, Maggie compared the accuracy of 3D models of isolated molars created using close-range photogrammetry to those created using microCT. Isolated molars were chosen as the subject because in paleoanthropology, isolated dentition are common in the fossil record and are used to determine diet and life history, as well as to assess evolutionary relationships.

For her project, Maggie travelled to South Africa to analyze a total of 40 molars from 3 different samples: one contemporary human sample, one archaeological sample, and a fossil hominin sample comprising of Homo naledi dentition. A total of 96 photographs were taken of each tooth, which were then compiled into a 3D model. microCT scans of the teeth were also taken and compiled into models. A point-to-point surface deviation function was used to analyze the surface differences between the photogrammetric and microCT models. Preliminary results indicate that surface differences between pairs of models fall within an acceptable range, signifying that close-range photogrammetry can be used as an accessible alternative to microCT for the creation of 3D models of isolated teeth.