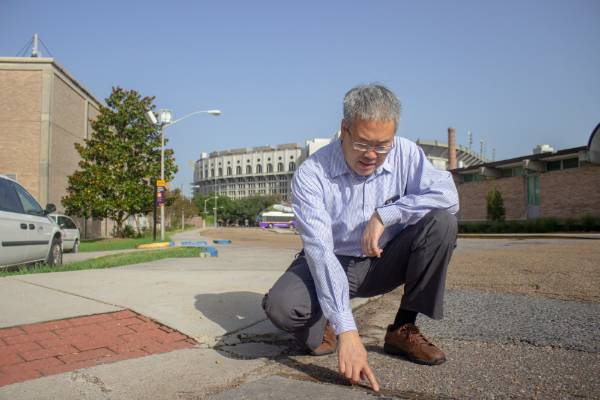 BATON ROUGE, LA – As any Louisianan knows, driving from point A to B can make for a rough ride. Many roads are full of potholes and cracks and in need of repair.

A number of factors go into creating these craters and cracks in the concrete—climate, weather, and traffic, mainly. Looking to fill the gap, so to speak, is LSU Mechanical Engineering Professor Guoqiang Li. His team’s work with a shape memory polymer will potentially not only save the state’s roads but also money and time.

“This problem of cracking in pavement has existed for more than 100 years,” Guoqiang said. “No one can control it, so you must have a good sealant. We propose a sealant that behaves thermally opposite to common physics.”

In 2009, Guoqiang received an award from the NCHRP Highway IDEA program for his project titled, "A Shape Memory Polymer-Based Self-Healing Sealant for Expansion Joint." The award was administered by the Louisiana Transportation Research Center, which provided supplemental funds for the project.

The project used a one-way shape memory polymer slab as sealant, which was compressed in a horizontal direction and stretched in a vertical direction before installation. This catered to the seasonal widening and narrowing of expansion joints in concrete pavement. Guoqiang’s team installed the sealant in two joints along CEBA Lane on LSU’s campus in 2011.

In 2012, Guoqiang further improved the idea by developing asphalt-based liquid sealant. He proposed incorporating one-way shape memory polymers with various pre-deformations, or simply by involving a two-way shape memory polymer, which expands upon cooling and contracts upon heating, in an asphalt matrix. A provisional patent was filed in 2013, and a non-provisional patent was filed in 2014 titled, “Liquid Sealant with Thermally Adaptive Properties.”

Based on this invention, as concrete freezes and shrinks, the sealant expands to fill the cracks. When the concrete heats up and expands, the sealant shrinks to prevent it from crushing and squeezing out of the channel.

According to Guoqiang, the sealants currently used by public workers are made primarily of asphalt, rubber or rubber-modified asphalt.

“The two-way shape memory polymer has a weak bond with concrete,” Guoqiang said. “We add asphalt to the sealant to not only reduce the cost, but it will also help the sealant bond with the concrete. Asphalt in the sealant can also protect the sealant from environmental attack. Ultraviolet irradiation from the sun will gradually degrade the polymer sealant, but the aging will be slowed down if asphalt is mixed with it.”

Thanks to two Small Business Innovation Research grants from the National Science Foundation totaling nearly $1 million, Guoqiang and his team—postdoctoral student Lu Lu and former PhD student Pengfei Zhang—were able to establish the Louisiana Multi-Functional Materials Group LLC (LAMG), a tenant of the Louisiana Business & Technology Center at LSU Innovation Park. Through this company, founded in 2016, Guoqiang hired four employees to work on the polymer-based sealant. Lu serves as the principal investigator and chief chemist on the project.

Lab-scale testing for Phase One of the project has been completed. Phase Two involves working with three departments of transportation and development (DOTD) in Louisiana, Texas and Minnesota.

The first step is for the Texas Transportation Institute to certify the material. The second step is doing a test road validation at an accelerated loading facility in Louisiana, where a modified truck will run over the pavement with the sealant for three months straight, equivalent to 20 years of traffic wear and tear. The final step is evaluating how the sealant will hold up in the frigid temperatures of Minnesota.

“Our goal is for Louisiana and Minnesota to finish their approval process by December 2019,” Guoqiang said.

His vision for the shape memory polymer doesn’t stop with asphalt. Though Guoqiang’s team has reached its goals for the polymer-based asphalt sealant, Ang Li, a recent LSU Chemistry graduate and a postdoctoral student working in Guoqiang’s lab, is currently working to improve the polymer for other projects that have pending patents.

“We set four goals for ourselves last year to make a high-performance thermoset polymer that is printable using UV light and has a fast cure so the polymer doesn’t lose its shape,” Guoqiang said. “Shape memory means it will form into one new shape and stay in that one shape until triggered by some external stimuli, such as heat.

“It must also be recyclable and self-healing. Based on textbooks, thermosetting polymers are not recyclable—you heat it, cure it, it’s set. It becomes a molded shape that cannot be remolded again. But if it’s self-healing, it’s also recyclable.”

In the future, Guoqiang would like to see the shape memory polymer used in concrete design, which could potentially save lives.

“I saw on TV, about 10 years ago, there was an earthquake in China,” he said. “Lots of people were still alive; they just couldn’t be rescued from underneath the building. But if you have a building made out of this polymer concrete, it will go back to its original shape by simple heating.”

Guoqiang, who has been with LSU’s Department of Mechanical & Industrial Engineering for 21 years, has many patents in the works for the use of this polymer, with Ang developing it along the way. Through their expertise and determination, there is no doubt that the polymer will shape the future.

“The infrastructure in this country has been degrading,” Guoqiang said. “I hope our company or this technology will be able to play a role in improving it. That’s my hope.”