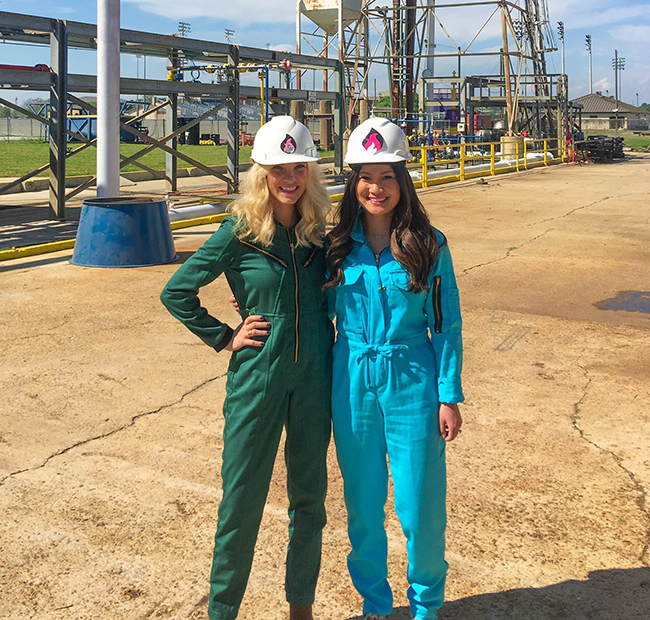 Though she has degrees in petroleum engineering and finance from LSU, as well as extensive work experience in both fields, the 29-year-old felt she had another calling—fashion design. Realizing that women’s wear in the engineering field could use a little makeover, Glas began her emulsion of fire and fashion with HauteWork™ (formerly Hot Stuff Safetywear).

So how does one go from finance to engineering to fashion? Let’s start at the beginning.

Glas, a Baton Rouge native and graduate of University High, began her freshman year at LSU taking fashion and finance classes and almost immediately started working towards a degree in international trade and finance (ITF) at the E. J. Ourso College of Business. As part of her time there, she studied abroad in China and became fluent in Mandarin. Then came a change of heart.

“I didn’t know if I just wanted to work in finance for the rest of my life,” Glas said. “I wanted to have an industry that I was specifically choosing. I started talking to people like my mom, who is a financial advisor, and she said she had a lot of clients who were petroleum engineers and got to live all over the world making a good living. She asked if I wanted to talk to one, so I talked to someone who worked for Chevron who suggested I take some [engineering] classes and give it a shot.”

After two years of working on her finance degree, Glas switched gears and delved into petroleum engineering at LSU. She quickly landed an internship with Chevron in Bakersfield, Calif., where she would work for three consecutive summers. In the summer of 2010, Glas slipped into her first pair of flame-resistant coveralls.

It’s not hard to imagine her face as she tried on her new uniform.

“I thought, ‘We can do better than this,’” she said. “I get that you have to protect and cover yourself. You can make any item of clothing out of flame-resistant fabric, so why couldn’t it look better? I just didn’t get it. I thought maybe one day if I have the money and the time, I’ll design something.”

For the next four years, Glas worked full-time as a production engineer for Chevron in Houston. The idea of HauteWork™ was never far from her thoughts.

“We’d be riding around, checking oil wells all day,” she said. “All the guys are wearing normal flame-resistant jeans and shirts, and I’m wearing a potato sack. I’d have to change after meetings to go into the field instead of just saying, ‘Let’s go.’”

When the oil and gas industry took a hit in 2016, Glas figured it was time to make a move on her clothing line.

“The industry wasn’t doing great, and Chevron was having layoffs,” she said. “I didn’t lose my job, but I thought about it strategically and said I need to do this now, so when things get better, I’m ready to go.”

As she contemplated leaving her job, a friend told her about a job opportunity in Austin. 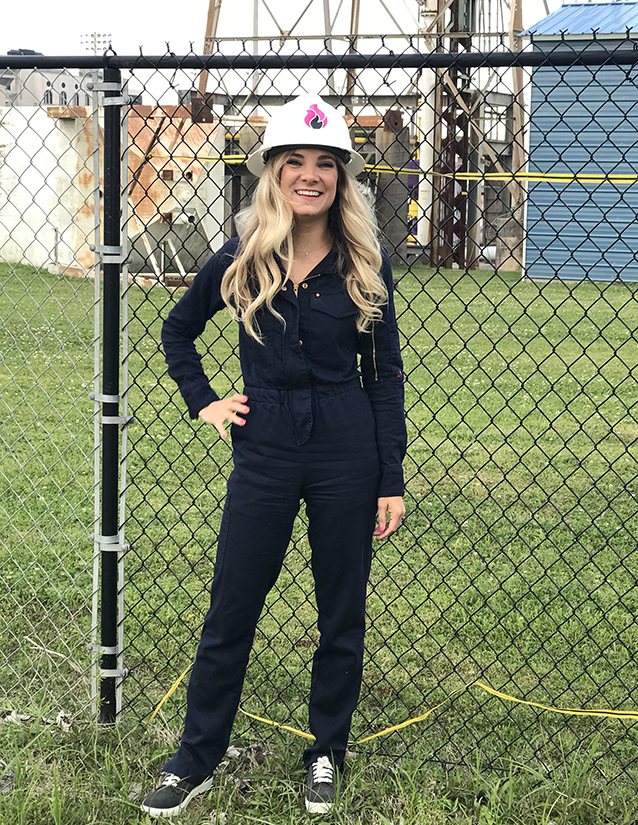 “I thought about just quitting, but then realized I needed a little bit more money saved,” Glas said. “So, I moved to Austin and began working for Parsley Energy. But I made it clear in my interview that I was starting a company, and I didn’t know what could happen with it.”

Two years after the move, the moment had come. HauteWork™ would be Glas’ sole endeavor. She said goodbye to her engineering job, moved home to Baton Rouge, and rolled right into marketing her company.

“I waited until I saved enough money on my own,” Glas said. “I was an engineer for five years and we make good money. Most of my friends bought houses or cars, got married, had kids, and I’m just like, ‘This is what I’ve spent my money on.’”

In July 2017, Glas officially launched the website for HauteWork™, a fashion-forward brand of flame-resistant clothing (FRC) whose mission is to build confidence in women working in the STEM (science, technology, engineering, math) fields. The line consists of various styles of coveralls and separates that are safe, stylish, and comfortable. All components of the coveralls are UL® certified to NFPA 2112 and garment designs are UL® compliant to NFPA 2112 and 70E standards.

The various coveralls include the Flex Suit, Fever Suit, Free Suit, Fierce Suit, the College Commemorative Flex Suit and Overalls. The suits are similar with a few exciting variations. The Flex Suit, for instance, has a hood that zips in and out of the collar, as well as multiple utility and tool pockets on the upper arm and thigh.

“That’s our bestseller,” Glas said. “It’s most similar to a regular coverall.”

The Fever Suit, Glas’ second-biggest seller, resembles a 1970s jumpsuit with brass zippers and snaps and has a Mandarin collar, while the Free Suit has a more tapered look. Her latest venture is the College Commemorative Flex Suit, which comes in collegiate colors with the option to add a college logo.

“I recently joined LSU’s Innovation Park,” Glas said. “Charles D’Agostino [executive director] connected me with someone to see how to put college logos on uniforms. That would make a great gift for college graduates.”

The suits come in all sizes from XS to XXL and are available in many vibrant colors. Glas added her own personal touch in naming the suit colors after her engineering friends—“Kelly” Crimson, “Carrie” Navy, “Loren” Light Blue, and “Rick’s” Egg Blue.

“When women try these on, I can tell they feel weird at first because they’ve never had a suit actually fit them properly,” Glas said. “I think part of the problem is these suits are generally being made by people who have never worked in the industry. They just take the men’s pattern and ‘shrink it and pink it,’ as I say.”

“I’ve gotten many emails, tons from girls who went to LSU, saying all of their female coworkers would be so thrilled to put this on,” Glas said.

While sales are “good,” Glas said she is looking to expand her company.

“I do a lot of cold calls myself,” she said. “Basically, a company must request the suits from the supplier, who then contacts the manufacturer. My strategy is to go directly to the company, so that’s what I’m doing now. But it’s hard to convince people to change from what they’ve been doing.”

Though Glas has had success in talking to different companies, along with seeing HauteWork™ now featured in the Turner Industries catalog, she is waiting for that one big spark to make her brand spread like wildfire.

“That’s what it’s going to take,” she said. “One company.

“A friend said she would be willing to quit her engineering job to help because she knows that anything she and I do together will be successful,” Glas said. “And that’s how I feel. I’m not going to give up—at all.”