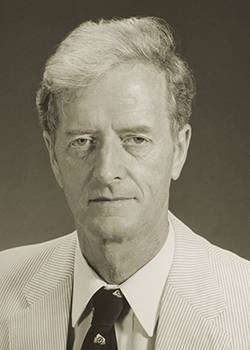 BATON ROUGE, LA – There have been many changes to LSU’s Cain Department of Chemical Engineering over the last four decades, but perhaps none more apparent than when LSU ChE Professor Emeritus Ed McLaughlin joined the department in the 1960s. It was a long road from Belfast, Ireland, to Baton Rouge, but McLaughlin’s journey to LSU is one that alumni and students can appreciate to this day.

McLaughlin appreciates the medal being named after him, but he is also proud of the many feats he accomplished as an LSU ChE professor, researcher, department chair and dean.

It all began in 1967, when then-LSU ChE Department Chair Jesse Coates paid a visit to McLaughlin in London while McLaughlin was serving as the assistant director of engineering at Imperial College, where he had earlier earned his PhD. Coates was aware that McLaughlin would be on sabbatical the next year and asked him to come to LSU to teach.

McLaughlin had already made arrangements to spend his sabbatical at the University of Minnesota, but he asked his family where they preferred to live—the heat or the cold? They unanimously voted to move to the South.

“Back in that day, students would get around campus on the Tiger Train, which consisted of open wagons with side-bench seats and brightly-colored canvas tops, pulled by a farm tractor,” McLaughlin said. “The LSU ChE offices were, in most cases, not air-conditioned. No interstate existed at that time. There were country roads to get to campus.”

What did impress McLaughlin about LSU, however, was the friendliness of the faculty and the “easy” relationship between faculty and students.

“The engineering students were always motivated and a pleasure to teach,” he said.

McLaughlin was also impressed by the students’ paths after graduating. He said their successes are what inspired him to seek their support financially and on advisory committees later. As the LSU ChE department chair from 1979 to 1987, McLaughlin brought in people he knew from industry and other areas of engineering whose expertise he trusted; one of whom was Bert Turner, the namesake of LSU’s construction management department. McLaughlin was also unafraid to solicit funding from big industries in order to provide the LSU ChE department with new equipment for its labs and to create professorships.

“One of the first things I did was look around and realize we needed salary and equipment,” he said.

McLaughlin also put together a ChE newsletter that was typed, folded and mailed to LSU ChE alumni in order to let them know what the department was doing and ask for funding. It turns out two LSU Engineering alumni professors wrote to McLaughlin and asked if they could raise money for professorships to honor the founders of the LSU ChE department, Jesse Coates and Paul Horton. In just a short amount of time, McLaughlin had raised more than $100,000.

“Before I knew it, I was up to my hips in professorships,” he said.

McLaughlin was eventually asked to serve as dean of the LSU College of Engineering, which he did from 1987 until his retirement in 1997. His accomplishments during his career included serving as a National Science Foundation foreign scientist from 1967-68, serving as chairman of the Baton Rouge chapter of the American Institute of Chemical Engineers from 1979-80, and serving as a member of the Louisiana Engineering Society.

He still calls Baton Rouge home and resides in the same house he has lived in since moving to the Red Stick in the late 1960s. Though his family (two daughters, one son, and five grandchildren) live out of state, McLaughlin and his wife of 63 years, Aine, choose to stay in Baton Rouge, a city they fell in love with thanks to the Tunica Hills area 50 miles north where they purchased a 200-acre farm many years ago.

“It became my raison d’être,” he said.

The young boy from Ballymena, Ireland, has left an indelible mark on LSU, as it has left one on his heart. McLaughlin’s hope is to see the LSU ChE department faculty leave their mark as well by making lasting connections to industry leaders that will ensure a bright future for the LSU ChE students.