When the U.S. Army needed to understand how climate change will affect the so-called “critical zone”—the thin land surface layer comprised of vegetation, soils, and sediments—to improve their own planning and secure people, equipment, and infrastructure, they turned to LSU.

Few other universities can match LSU’s capabilities and expertise on this topic. We’re glad to be partnered with the best.

Through one of the largest project grants—$9.3 million—ever awarded to a single LSU coastal science and engineering team, the U.S. Army is now collaborating with faculty and students who straddle the College of Engineering and the College of Coast & Environment and are working toward degrees in coastal and ecological engineering.

“Alteration of the critical zone on military installations caused by climate change is a growing concern for the Army and Department of Defense,” said Edmond Russo, director of the U.S. Army Engineer Research and Development Center’s Environmental Laboratory (ERDC-EL), Louisiana native, and LSU civil engineering alum. “Through investments in R&D and partnerships with experts in academia and private industry, the Army will find the best solutions for the future.”

What happens to deltaic systems, now and in the future, is of great importance to the military. About 40% of the world’s population lives near a coast, and much of that population is concentrated near deltas—people are nine times more likely to live in a delta than elsewhere. Meanwhile, the critical zone within inherently low-lying deltas is the most at-risk from climate change. If the goal of the military is to protect land, people, and assets, then deltas matter.

“Few other universities can match LSU’s capabilities and expertise on this topic,” Russo continued. “We’re glad to be partnered with the best.”

The joint project, Anticipating Threats to Natural Systems, or ACTIONS, is a collaboration between ERDC-EL, LSU, and the University of Delaware. Many military installations and training grounds are located along coasts, so it’s important for the military to understand the nature and future of each type of coastal terrain for optimal terrain awareness.

“The first time I heard ‘ecological warfare,’ I thought, are you kidding me—what an oxymoron,” said Robert Twilley, professor of oceanography and coastal sciences and LSU Rainmaker. “But we can design ecosystems to solve complex problems of national security, including for the military.”

“What’s so important about ACTIONS is that it gives us and our students an opportunity to not just write a chapter, but the full narrative about coastal change and the fate of the world’s deltas,” Twilley continued. “By partnering with the Army, we get to write the whole book. We get to show them the future coastal terrain, and for the first time, we’re able to connect restoration, conservation, and ecosystem design and engineering with performance and value. That’s really important, as the military sets a high standard of relevance in everything they do.”

We get to show them the future coastal terrain, and for the first time, we’re able to connect restoration, conservation, and ecosystem design and engineering with performance and value. That’s really important, as the military sets a high standard of relevance in everything they do.

- Robert Twilley, professor in the LSU College of the Coast & Environment

What happens to the critical zone within the Louisiana delta is determined by two important boundary conditions set by the ocean at land’s edge and the rivers, inland. Water levels are influenced by both astronomy (as the Sun and Moon push tides) and meteorology (weather, wind, and temperature). Together, these factors determine the magnitude and extent by which land will experience saltwater intrusion, which may harm property, soils, and infrastructure. Understanding the depth of these problems requires expertise in many areas.

“By nature of its geology and geography, Louisiana is a living laboratory for how to use ecosystem design and engineering, innovative planning, and community collaboration for coastal sustainability,” said Clint Willson, director of the LSU Center for River Studies and professor in the LSU Department of Civil & Environmental Engineering. “Having spent nearly seven years in the U.S. Marine Corps, I am excited to conduct research that is so relevant and applicable to Department of Defense installations and operations. And, as a civil engineering professor and educator, it is important to remember that so much of the research and tools that come out of this project are applicable to our coastal communities and infrastructure, not just here on the Gulf Coast but across the U.S. and the world.”

In the soils, mud, and marsh of Louisiana, LSU students are leading the charge. As part of an R-1 research university, and a sea-, space-, and land-grant institution in the middle of the world’s fifth-largest delta, LSU students are now working and conducting research on the ecological front lines and witnessing first-hand what coastal communities around the globe are expected to experience in the next 50 years.

Let’s meet three of them and learn more about why their wading through the waters of southeastern Louisiana is of critical importance to the U.S. Army. 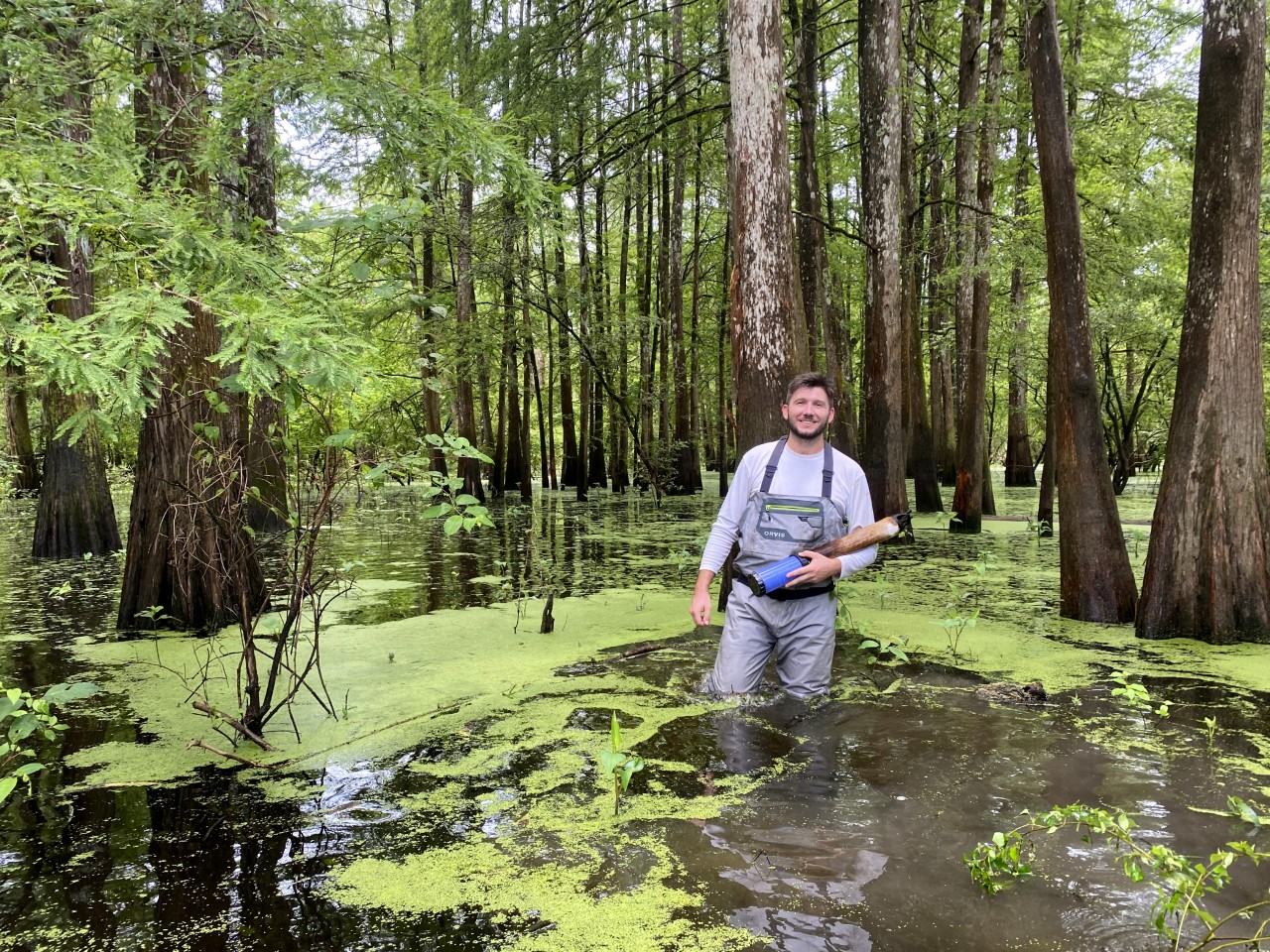 Louisiana’s flat coastal landscape makes it difficult to predict where the water will go. Small differences in elevation can make a big difference. Colin Anderson is building a model to help predict the flow of water, which helps decide the life and death of deltas. In the photo, Colin Anderson stands in the Atchafalaya River Basin, North America's largest floodplain swamp.

Colin Anderson is creating a Hydraulic and Hydrologic (H&H) model to help predict water flow and flooding in the lower Atchafalaya River Basin, North America’s largest floodplain swamp. He’s researching the relationship between the backswamp region and the main river channel, which is a distributary of the Mississippi River, taking on about a third of its water as it approaches the Gulf of Mexico. As such, the Atchafalaya Basin helps with flood relief as well as water filtration and water quality. It functions as the kidneys of the Mississippi River, which drains 40% of the U.S.—31 states. The Atchafalaya is also the only example of coastal land building in Louisiana, as sediment from the river is continuously deposited in the delta.

“Understanding hydraulic connectivity between the Atchafalaya River and backswamp has many benefits,” Anderson said. “Ecologists can improve their understanding of how the system may transform due to climate change by measuring parameters such as inundation extent, percent inundation, and flow patterns. My H&H model could improve environmental design strategies for the Atchafalaya River Basin and for military planning.”

Anderson is also collaborating with The Nature Conservancy, a global environmental organization and the largest such non-profit in the U.S., to monitor water quality.

“I will never forget the unique mix of fear and elation as I waded through chest-high water to collect a sample,” Anderson said.

Amanda Fontenot is studying the complex problem of marsh elevation in coastal Louisiana. It’s the result of continuous addition and subtraction. Elevation goes up with accretion, the amount of sediment brought in by rivers, storms, and tides, but also plant litter and root turnover. Elevation goes down because of subsidence, a general sinking of the land. If accretion is equal to subsidence, then a marsh will have the same surface elevation. At that point, changes in water depth are determined by changes in sea level. How often and how long a marsh is flooded determine its chances of survival. Too much water means plants cannot grow. Each year, marshes drown, contributing to wetland loss. Meanwhile, coastal communities and the military alike depend on marshes for protection against flooding and storm surge. 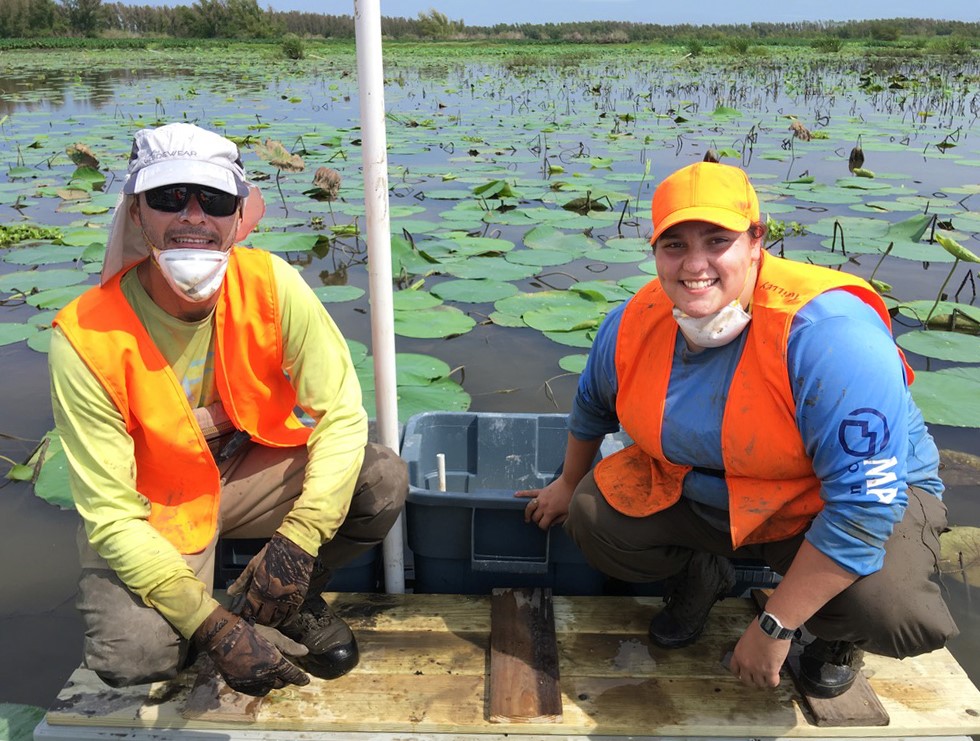 “My research uses a technique called marker horizons to measure annual accretion rates in the marshes of the Atchafalaya and Terrebonne coastal basins,” Fontenot said. “Marker horizons are established by sprinkling a layer of white, powdered feldspar on top of the wetland sediment surface. We then return every six months to measure the depth of the soil layer that has built on top of our marker using a cryo-coring technique. We insert a metal tube vertically into the soil and use liquid nitrogen to freeze a ‘popsicle’ of soil around the tube. We can then calculate an accretion rate by measuring the distance between the soil surface and our marker horizon, which shows up as a white ring.”

“Through our measurements, we can determine which coastal landscapes marshes will survive a changing climate,” Fontenot said. “These predictions can be used by the military to manage operations in coastal landscapes that are vital to their existing facilities and training.”

Brandon Wolff is working to determine how wetland plant growth responds to different lengths of time the marsh surface is flooded. 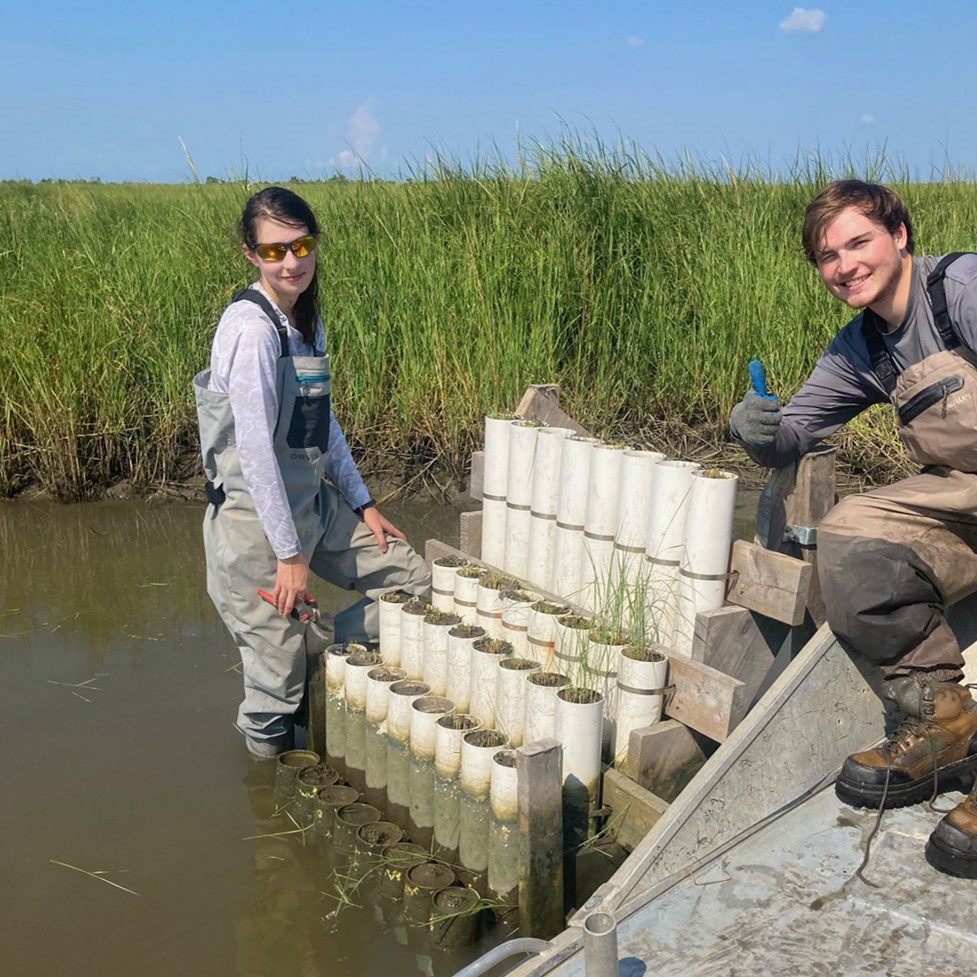 Brandon Wolff and Danielle Soileau monitor plant growth in a ‘marsh organ’ that shows how well plants grow in relationship to water level.

“The wetland sites we study in coastal Louisiana are highly vegetated marshes that act as natural barriers to storm surge and flooding,” Wolff said. “Dense vegetation and root systems provide soil strength to the coastal landscape that protects coastal communities and military facilities against the frequent, and increasingly powerful, weather systems that hit our coast.”

The surface elevation of a marsh, relative to water levels, determines the length of time a marsh is flooded, and a marsh plant’s ability to grow. Wolff uses technology called a ‘marsh organ’ to elevate different marsh surfaces experimentally. He’s working at two sites near Fourleague Bay in southeastern Louisiana, one brackish and one saline, that provide the full range of water levels during river floods, tides, and storms.

“Measuring plant growth along the full range of possible flood conditions could illuminate a sweet spot in terms of elevation, which will be valuable in ecosystem designs to rebuild marshes and strengthen coastal storm surge protection,” Wolff said. “For an entity like the U.S. Army, with many land and sea operations that rely on the transitional coastal areas, it is now more crucial than ever to understand the dynamics of how our marshes are changing and the hazards these changes can cause.”