Center for Advanced Microstructures and Devices

NOTE: All Training and Testing Material is for LSU CAMD Users ONLY!

Please allow two weeks for your badge to be processed.

This training will provide you with a basic overview of radiation safety at CAMD. By the end, you should have a good understanding of CAMD’s radiation policies, general radiation terminology, risks and controls at the facility, and your responsibility with regards to safety at CAMD. This training (and annual refresher trainings) are required by Louisiana Department of Environmental Quality’s (DEQ) State regulations and/or LSU radiation safety policy for anyone who may frequent a radiation lab.

CAMD is a synchrotron radiation research center at Louisiana State University in Baton Rouge. The mission of CAMD is to provide infrastructure for research and education in synchrotron-based science and technology. The heart of the facility is a 1.5 GeV electron storage ring that was built exclusively to provide synchrotron radiation. As radiation is being produced, safety measures are necessary for anyone who enters the experimental hall or tunnel.

So what is radiation? Radiation is energy traveling through space. It can be more technically defined as: The emission or transmission of energy in the form of waves through space or through a material medium including electromagnetic, acoustic, and particle radiation, as well as all forms of ionizing radiation.

Is it dangerous? Radiation in high quantities is dangerous. Radiation safety and responsible staff and users at CAMD have helped guarantee that no one has ever received a high dose at CAMD.

What would you consider more dangerous?

Riding 1 mile on a motorcycle (threat from a collision)

Riding 300 miles in a car (threat from a collision)

According to the Nuclear Regulatory Commission, these all have the same increased risk of death (1 in 1 million). There are other ways to compare radiation risk using the following charts:

Radiation is everywhere! Regardless of where you live in the world, you will receive some amount of radiation dose. Background radiation usually refers to radon gas, cosmic radiation, 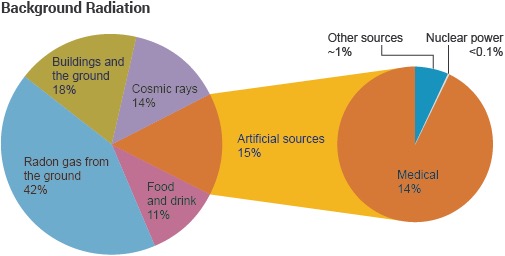 There are several different units used to describe radiation. While CAMD users are not expected to know them all, having a general understanding or recognition of the following terms is helpful. NRC sums these up very nicely:

“There are four different but interrelated units for measuring radioactivity, exposure, absorbed dose, and dose equivalent. These can be remembered by the mnemonic R-E-A-D, as follows, with both common (British, e.g., Ci) and international (metric, e.g., Bq) units in use:

Synchrotron light produced by the 1.5 GeV storage ring ranges greatly in the electromagnetic spectrum. CAMD produces both non-ionizing and ionizing radiation beams. Ionizing radiation is radiation that can cause an atom to lose or gain electrons changing its charge. This allows for a variety of research to be done. 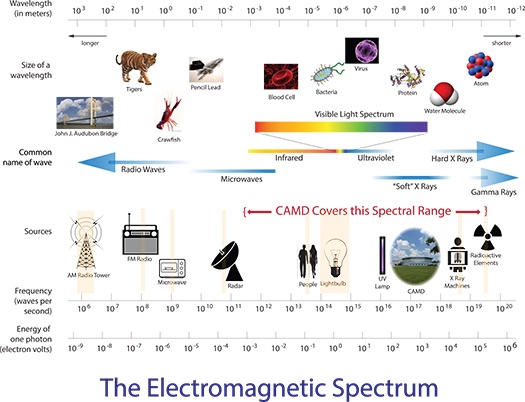 Like other toxins and hazards radiation may cause damage when it interacts with our bodies. Living cells can do one of a few things after exposure to radiation(7):

The effects of exposure to radiation can be categorized as Chronic or Acute.
Acute Exposures are a large amount of radiation all at one period of time.

Acute exposures do not typically begin until more than 10,000 mrem as no clinical effects are observable at these levels. However, beyond this health effects may include:

Other examples of acute effects of radiation include erythema (reddening of skin), cataracts, hair loss, and sterility.

Chronic exposures are smaller doses over a long period of time. Typically, chronic exposures refer to cancer incidence. While risk of cancer due to occupational doses is very small, particularly when compared to background cancer rates, regulations take a very conservative approach to be cautious. This is called the Linear No-Threshold Model. Meaning, any amount of radiation may increase your chance of getting cancer. While this is not supported by research, it is a safe/conservative approach. 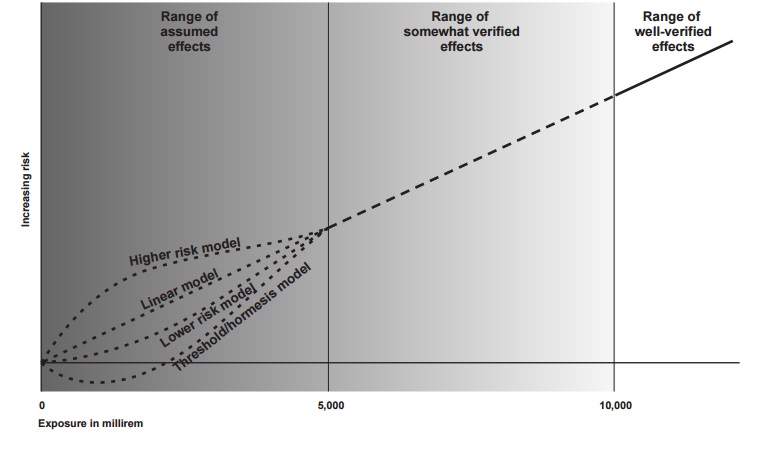 The general approach to radiation safety is keeping in mind ALARA. The goal of radiation safety at LSU is to keep radiation doses As Low As Reasonably Achievable (ALARA). The three keys in achieving this are minimizing time near radiation, maximizing distance whenever possible from radiation sources, and utilizing shielding to attenuate (absorb and block) radiation.

Now that you have learned about Radiation. Lets cover the details for CAMD.

The CAMD facility typically follows university hours. See the operations schedule for more information or to inquire about outside normal hour beam time.

If you are visiting CAMD please have your escort fill out the CAMD guest log at the entrance to the experimental hall.

The security access card is obtained from the facility manager after they have received proof of radiation safety training. A $10 deposit is required and will be returned when access card is returned.

Minors and any individuals who are not members of a state supported institution, must sign an indemnification agreement as part of their radiation training. It is the responsibility of the person being trained to inform the CAMD safety officer if he/she is not a member of a state-supported institution. Contact Craig Stevens for this document or more information.

At the center of the hall is the synchrotron ring. This is surrounded by a seven feet high concrete shield. This area may not be accessed during injection or stored beam. The radiation interlock system is in place to make sure no one accidentally accesses these areas when there is a potential radiation hazard.

Outside of the concrete walls are the beamlines. Some of these are surrounded by radiation interlocked hutches. Just like the ring, hutches shall not be accessed when the beamline is in use. 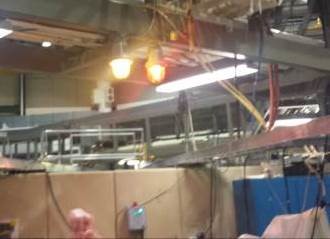 Two lights are used to indicate the arming of the interlock system (red) and that beam is about to be injected, or stored beam (white).
Injection is preceded by a verbal announcement" Prepare for injection" followed by the following: "Injection. Injection, Injection". When injection is complete you will hear "Injection is complete". It is ALARA to maximize your distance from the ring during injection. During injection and a beam dump are when the facility doses will be highest.

Radiation and Safety Policies are posted on the website at User Forms and Policies and scrolling down to the policies section. As these should be regularly updated, please check them periodically. 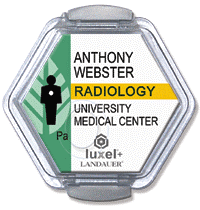 In general, radiation badges should be worn between the hips and shoulders outside of any clothing with the window facing outward on the portion of the body nearest the radiation source. Each individual that is provided dosimetry is provided with an annual report of their radiation exposure. If you want a copy of your radiation exposure, call the Radiation Safety Office to make your request.

The LSU radiation safety program will be conducted in such a manner so that exposure to faculty, staff, students, the public, and the environment will be maintained as low as reasonably achievable (ALARA) and that no radiation exposure will be received without societal benefit. This will be accomplished without impeding legitimate research, or realistic teaching objectives.

Each person who handles radioactive materials or irradiator sources must realize that the ultimate success of a radiation safety program lies in responsible actions by individuals in their daily work.

Everyone working at CAMD is provided with a radiation badge. The badge is effective in recording all exposures from photons. The badges are to be kept in your assigned drawer at the CAMD facility when you are not wearing it. You must wear your badge whenever you are at the CAMD facility. Visitors staying less than one week do not normally receive a radiation badge. Because of the possibility for activation, personnel dosimeters (badges) should be worn at all times when at CAMD, even if you are working while the machine is turned off. While Neutron doses are possible, they are monitored by area badges only. 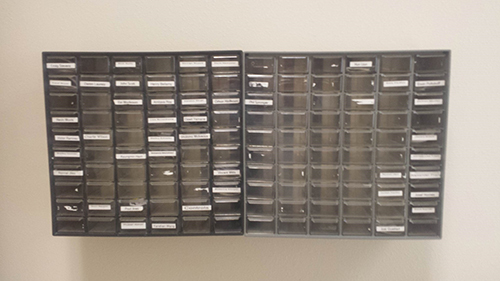 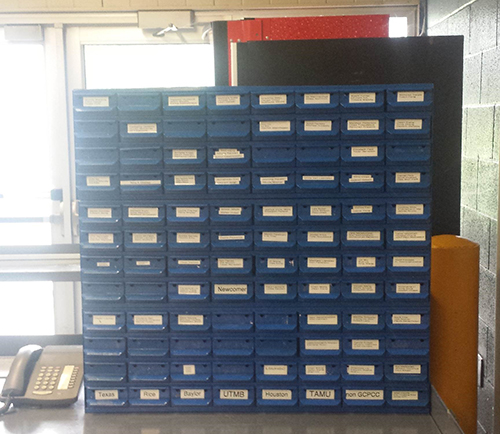 To best monitor radiation at CAMD, several different measurements are taken. These include:

Training and survey equipment are available for temporary use with the radiation safety officer’s approval.

Wear your badge all the time you are at CAMD! Badges must be kept in their assigned drawer when not in use.

Crash buttons are placed in all hutches and in key places around the ring. Pressing them will cause a beam dump. Be observant of their location to avoid accidental triggering and quick access when necessary. These are for emergency purposes only.

Contact the Radiation Safety Officer with any questions pertaining to this material.

Activation – Radiation caused by irradiation (creating a radioisotope by bombarding it with other radiation).
Activity – the number of spontaneous nuclear transformations which occur in a quantity of a radioactive nuclide per unit time.
Beam – a flow of electromagnetic or particulate radiation directed within a small angle.
Dose – Mean energy imparted into mass. It should be more precisely referred to as Equivalent, Absorbed, or Effective Dose.
Interlock – A device which automatically shuts off or reduces radiation from an accelerator to prevent unintentional exposure to radiation.
Exposure – A measure of radiation in air.
Bremsstrahlung – radiation associated with the acceleration or deceleration of charged particles.
Synchrotron Radiation - radiation which occurs when charged particles are accelerated in a curved path or orbit.