Center for Advanced Microstructures and Devices

NOTE: All Training and Testing Material is for LSU CAMD Users ONLY!

Crane training is required for all individuals who wish to use the crane at CAMD. This manual is presented as a guide and may be used for retraining/re-certification only. Initial training in crane safety requires an appointment made through CAMD safety and a minimum of a two hour time commitment to learn about general crane safety rigging and lifting procedures. You may contact CAMD safety by dialing 8-4616 from any CAMD facility phone or from the LSU campus. Those wishing to reach CAMD safety from other locations should dial 225-578-4616. This document contains information of use for all individuals using the crane at the CAMD facility.

The CAMD crane was manufactured by Gaffey Crane Company of Houston, Texas. It is equipped with a two ton limit crane hook. Gaffey performs yearly maintenance and emergency repairs. A spreader bar is also available, which has the advantage of distributing the weight of the load on two hooks.

Rigging materials are available in the electrical room of the utility building of CAMD. Always inspect all rigging before use. Be aware that it is easy to damage nylon rigging on sharp or protruding corners.

In addition to improper rigging, cranes hitting overhead obstacles represent the most frequent hazards of crane operation. Before beginning a lift, clearly inspect the entire proposed path of the crane, paying particular attention to overhead obstacles (especially overhead electrical hazards which could be fatal) and whether the path of the crane will pass directly overhead of any individuals. Always have a spotter available, particularly in blind spots. Never exceed the crane capacity and never attempt a critical lift unless you have years of experience in utilizing the CAMD crane. A critical lift is defined as one exceeding 90% of the rated capacity of the crane. For the CAMD crane, a critical lift is greater than 3600 pounds.

A crane is a vertical lifting device. It should never be used to drag or pull a load. Always position the crane directly perpendicular to the load to be lifted. Non-vertical lifts can damage both the crane and the rigging materials and may result in improper wrapping around the drum. If the drum wraps are not seated in the proper position, immediately cease crane operation and inform facility maintenance.

An operator who leaves a load suspended and unattended is subject to disciplinary action, which may include revocation of his or her license to operate the crane.

The first procedure in any crane lift is to assess the valid performance of the limit switches of the crane. To accomplish this task, run the length of the crane rope to the lower limit. For CAMD, this limit is approximately 4 inches from the floor. Make sure that at least 2.5 wraps remain on the drum. Once the lower limit switch has been tested, raise the crane hook to the upper limit switch, all the while making sure the rope wraps correctly. There should be no cross wrapping or ill sitting of the rope on the grooves of the drum. Ensure the top limit switch stops before hitting the drum. As you approach the top limit switch slow the crane from the fastest position (3) to the slowest position (1) to prevent hitting the upper limit. If either limit fails the crane should be locked out. The electrical control panel for the operation of the crane is to the left of the experimental hall door (on the receiving side) adjacent to the log-out tags. Pull the lever down to place in the off position.

CAMD maintains a rigorous inspection program. All maintenance is performed only by qualified personnel. Being a qualified CAMD crane operator does not qualify one as maintenance personnel. Maintenance is required whenever a wire has wrapped incorrectly on the drum or a limit switch fails in either the upper or lower modes. In case of any suspected failure the operator must immediately cease operation, remove power from the crane and inform the facility management or CAMD safety. Place a lockout tag on the remote control unit. All CAMD crane operations are conducted using the portable remote control for the crane. After retrieving the remote control, check the level of the battery. If the battery does not register in the green, replace the battery before continuing. Collect suitable slings for properly securing all loads. Examine slings for any defects. Before beginning any lift, check upper and lower limit switches without any weight attached. The crane limit is 2 tons (4000 pounds) which must include the weight of all rigging equipment. A scale is available to check overall weight.

Once the crane has been established to be working properly, rig the load properly, attaching tag lines for loads which might be susceptible to swing. Always ascertain that the area over which the load will travel, is free and clear of personnel or other potential obstacles.

The most important job of any crane operation is rigging of the load. Poor rigging may result in personnel injury, property damage, or other serious hazards. Rigging is the most time consuming of any crane operation and represents the single most hazardous potential of crane operation. In a multi-sling operation, each leg must be of the same length and must contribute equally to load distribution. Nylon slings are susceptible to damage by sharp corners on the item to be rigged. Caution must be taken to ensure that slings are not damaged by sharp corners or by excessive loading. Rigging requires years of practice to perfect. If in doubt about the security of your rigging, ask for help.

Rigging should be checked by lifting the load a few inches off the ground to ensure that no swing develops and that the load is completely secure. Remember it is important to take the time to accomplish this task correctly. Not doing so may result in catastrophic consequences. One of the most important things to check before lifting a load is to look for loose items, such as screws or tools which may have been used to secure the load. Such items can become projectiles during a lift. This is the reason why crane operators or especially tag line operators should wear hard hats when operating the crane and why it is essential to make sure the path of the crane does not pass over the head of any individual. 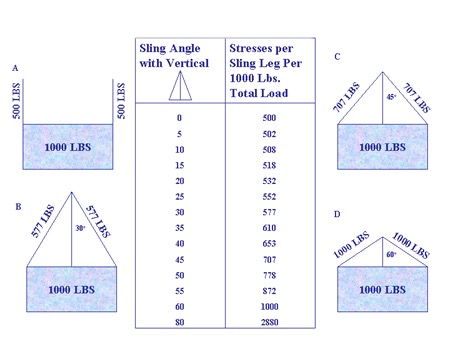 The angle at which a sling holds a given load influences the effective weight of the load. Stresses are minimal for loads with slings held perpendicular to the load, as shown in Figure A. For distributing the load vertically among more than a single leg of a sling, a spreader bar may be used. As shown in figures B-D, increasing the angle of the sling to the hook from 30 to 60 degrees increases the effective mass of the load from 1154 lbs to 2000 lbs, essentially doubling the weight on each leg of the sling at 60 degrees. The chart in the middle offers a handy guide for assessing the effective angle of the sling to the relative weight. Thus, it is always better to limit the angle of the sling. Further, such changes in sling angle must be accounted for in lifts that are close to the sling weight limit and/or for critical lifts (greater than 90% of the crane limit). Crane operators should download a copy of this chart and carry it with them during crane operations.

Crane lifts require the use of slings. Slings are generally made of nylon or wire mesh. Nylon slings have the advantage of being easy to wrap around a load but can be easily cut or damaged if used improperly. Nylon slings which have been mishandled are subject to bleed-through. A red ink mark appears on the surface at the point of damage. Inspect all slings before use. Wire slings should have no more than two wires out of nine broken. Discard all damaged slings immediately.

The emergency stop signal is a horizontal hand wave of the extended arm. It is important to immediately react because the person giving the signal may have knowledge that the crane operator does not, including: better view, knowledge of hazards, etc.

Obey all STOP signals regardless of who gives them. Other than EMERGENCY STOP, signals should be accepted from only one person at a time (normally the spotter for the operator). Use standard crane signals and do not move unless directions are clear.

The capacity of the CAMD crane is 4000 pounds. The weight limitation occurs because of the small hook attached to the lifting mechanism. Stabilization of the loads may be made possible by the use of a spreader bar, which gives 2 points of attachment, instead of the usual one point. The weight of the spreader bar must be included in the total weight of the lift. A crane scale is available to ascertain the total weight of the lift . Once the weight has been determined to be within the crane capacity, it is necessary to determine the center of mass. Loads not accurately balanced will tip or swing and result in a hazardous lifting environment. Light loads are apt to swing more readily and may require attachment of one or more tag lines to impair rotation of the load. This requires 1 or more individuals in addition to the crane operator.

Crane operation is a serious responsibility which should never be taken lightly. A properly trained crane operator will never approach another crane operator during a lift unless he/she observes a hazardous situation which requires immediate cessation of the lift. People with poor peripheral vision or diminished capacity due to ingestion of pain relievers, decongestant or other medication which may impair their mental acuity should not operate any crane. The use of alcohol or other intoxicants by crane operator is strictly forbidden and will result in loss of crane operator privileges.

Crane Safety After Use

After completion of a safe lift, spot the crane in an approved location. The CAMD crane should never be left directly over the 90 degrees bending magnet of the storage ring because the bulk of the crane can act as a strong scattering force and contribute to sky shine radiation. Never leave a load attached to the crane and if you must absent yourself from the locale of the load, always take the controller with you. Always lower the load completely to the ground and give yourself some slack in the slings before attempting to remove the rigging from the crane hooks. Remember only vertical lifts must be made and dragging of the load horizontally is specifically forbidden. Ensure that the operator can see all potential hazards clearly at all times; otherwise, a crane spotter is necessary for all lifts. Once crane rigging is removed, return crane hook to upper limit switch. This will prevent the potential for the crane hook to hit any potential obstacles when the crane is next moved along its circular path.

Each crane operator should be held directly responsible for the safe operation of the crane or hoist. Whenever there is any doubt as to safety, the operator should stop the crane and refuse to handle loads until safe conditions have been restored. There is a minimum requirement of 18 years of age and fluency in the English language to operate the CAMD crane. Persons must also have good hearing and peripheral vision. These attributes are necessary for safe operation of the crane. All crane operators must have have received training including: written materials; hands on experience; and testing of knowledge, both written and practical. Persons must also have had some training in the important fundamentals of rigging loads. Crane operators using a new lifting device must be familiar with the manufacturer's directions, noting any special instructions. No lifts over 100% rated capacity may be made without the prior written consent of the CAMD safety operator.