There has been a concerted effort over the years to set up a competitive MS&E research and education program on the LSU campus. The history of this effort has been marked by frustration due to state laws regulating Ph.D. program and the rapid turn over of administrator (especially vice chancellor for research). For example, on Nov. 4, 1994, the higher education desegregation agreement specifically limited the Ph.D. in Materials Science to Southern University (SUBR) and forbid LSU from such a degree program. The consent decree expired on Dec. 31, 2015.

In it's 1999 document entitled "Louisiana:Vision 2020," the Louisiana Economic Development Council, Chaired by Governor Foster, envisioned the state moving to diversify its economy by an emphasis on the development of six high technology areas. The materials technology sector was identified as a major focus area for state-wide investments in research and development for future economic development. In 1999 a Materials Science Workshop was organized by the Vice Chancellor Lynn Jelinski.

In January 2001, the Blue-Ribbon Panel composed of Reza Abbaschian (MS&E, Univ. of FL), Neil Ashcroft (Physics, Cornell), John McDevitt (Chemistry, Univ. Texas, Austin), and J. Scott Hauger (AAAS) was asked to conduct an external review of "A Review of the Potential for a Program in Materials Science and engineering at Louisiana State University." The review was organized by AAAS, an organization that frequently conducts reviews of EPSCoR program. This blue ribbon panel submitted its report on January 8, 2001. Several of their funding and recommendations were very astute. 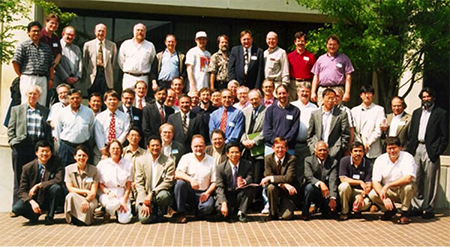 All of the attempts to create a Ph.D. program in MS&E have failed due primarily to state laws forbidding the Flagship University for creating such a program. Item #3 has been the focus in recent years for creating the shared Instrumentation Facility (SIF). The multi-component Materials Science and Engineering Research Institute is what we now call the Institute of Advanced Materials.

Developing the Ph.D.. Proposal to the BoR

In the summer of 2002, LSU and Southern drafted a Letter of Intent to build a Joint Ph.D. program in MS&E. The Advanced Materials Research Institute (AMRI) at UNO became involved which coupled LSU, SUBR and UNO. The Board of Regents was presented with the MS&E plan. The Letter of Intent was then revised to change the program from a joint to a cooperative program. The Letter of Intent described how the program would work and how the three institutions would each play a role in the academic aspects of the program. The Degree the student received upon graduation would be a Ph.D. in Materials Science and Engineering, but the individual departments and colleges get credit for graduates. We had a nearly complete Proposal for the Cooperative Ph.D. Program when Katrina hit Louisiana and delayed the program until Spring 2006. In the end, the program failed because of the state rules governing how we could teach students and then eventually by the reorganization of education in LA.

In 2008, a one-year conditional Center for Advanced Materials (CAM) was established. The renewal was never submitted by interim vice chancellor for research and economic development, Professor Doris Carver, because of budget restraints. In 2008, LSU launched a Multi-Hire Initiative in MS&E under the leadership of then vice chancellor for Research, Brooks Keel. Within a year, five outstanding faculty were hired, but the program died the next year do to state budget constraints.