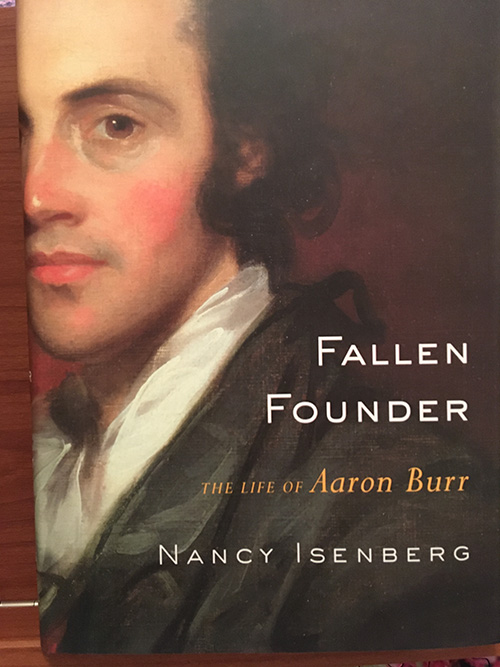 Nancy Isenberg, T. Harry Williams Professor of American History, is the author of Fallen Founder: The Life of Aaron Burr, which was cited in the landmark Supreme Court ruling over presidential immunity from criminal proceedings.

Photo Credit: Nancy Isenberg
BATON ROUGE – The U.S. Supreme Court cited LSU History Professor Nancy Isenberg’s 2007 biography of Aaron Burr in a landmark ruling over presidential immunity from criminal proceedings.
Isenberg, the T. Harry Williams Professor of American History in the LSU Department of History, penned a prize-winning biography about Burr in 2007 titled, Falling Founder: The Life of Aaron Burr. Her meticulous research challenges the all too easily targeted Revolutionary era figure.
In the opinion written by Chief Justice John G. Roberts, the court ruled that Article II of the United States Constitution and the Supremacy Clause do not categorically preclude, or require a heightened standard for, the issuance of a state criminal subpoena to a sitting President. This ruling will grant New York prosecutors access to President Trump’s tax returns.
Justice Roberts’ opinion drew on the 200-year history of Presidents being subject to federal judicial process. In citing Isenberg’s book when former Vice President Aaron Burr was on trial for treason, Roberts wrote, “The trial that followed was ‘the greatest spectacle in the short history of the republic’ complete with a Founder-studded cast.”
“Too often dismissed by legal interpreters of the founding era, Aaron Burr had an ingenious legal mind and played a crucial role in his own defense.  He urged the subpoena duces tecum that ultimately secured President Jefferson’s surrender of documents that the Roberts court drew upon in its opinion.  I’m gratified for the citation, of course, but even more encouraged by the respect being shown for historical scholarship,” said Isenberg.
“The History department is proud of Professor Isenberg, both for what this accomplishment says about the prominence of her scholarship and for demonstrating the continuing value of humanities research in our national life,” said Aaron Sheehan-Dean, chair of the LSU Department of History.
This is the first time the Supreme Court has cited Isenberg’s work. Her research interests include American political culture, legal and constitutional history in the U.S., and gender and politics. She was named the fourth most influential thinker, doer, and visionary in Politico’s Top 50 Guide, and she received the 2017 LSU Distinguished Research Master Award.
In addition to Fallen Founder: The Life of Aaron Burr (Viking 2007), Isenberg is also the author of The Problem of Democracy: The Presidents Adams Confront the Cult of Personality (Viking 2019), New York Times bestseller White Trash: The 400-Year Untold History of Class in America (Viking 2016),  Madison and Jefferson (Random House, 2010),  Mortal Remains: Death in Early America (University of Pennsylvania Press, 2003), and Sex and Citizenship in Antebellum America (University of North Carolina Press, 1998).
About the LSU College of Humanities & Social Sciences
The LSU College of Humanities & Social Sciences positions students, faculty, and staff to be visionary leaders in their respective fields, a tradition of excellence that began with the college’s inception in 1908. For more news and information about the LSU College of Humanities & Social Sciences, visit hss.lsu.edu.
Like us on Facebook (@LSUHSS) or follow us on Twitter (@LSUHSS) and Instagram (@lsu_hss).
Contact Sarah Gaar Keller
LSU College of Humanities & Social Sciences
225-578-6906
sarahg@lsu.edu
Ernie Ballard
LSU Media Relations
225-578-5684
eballa1@lsu.edu
LSU
©