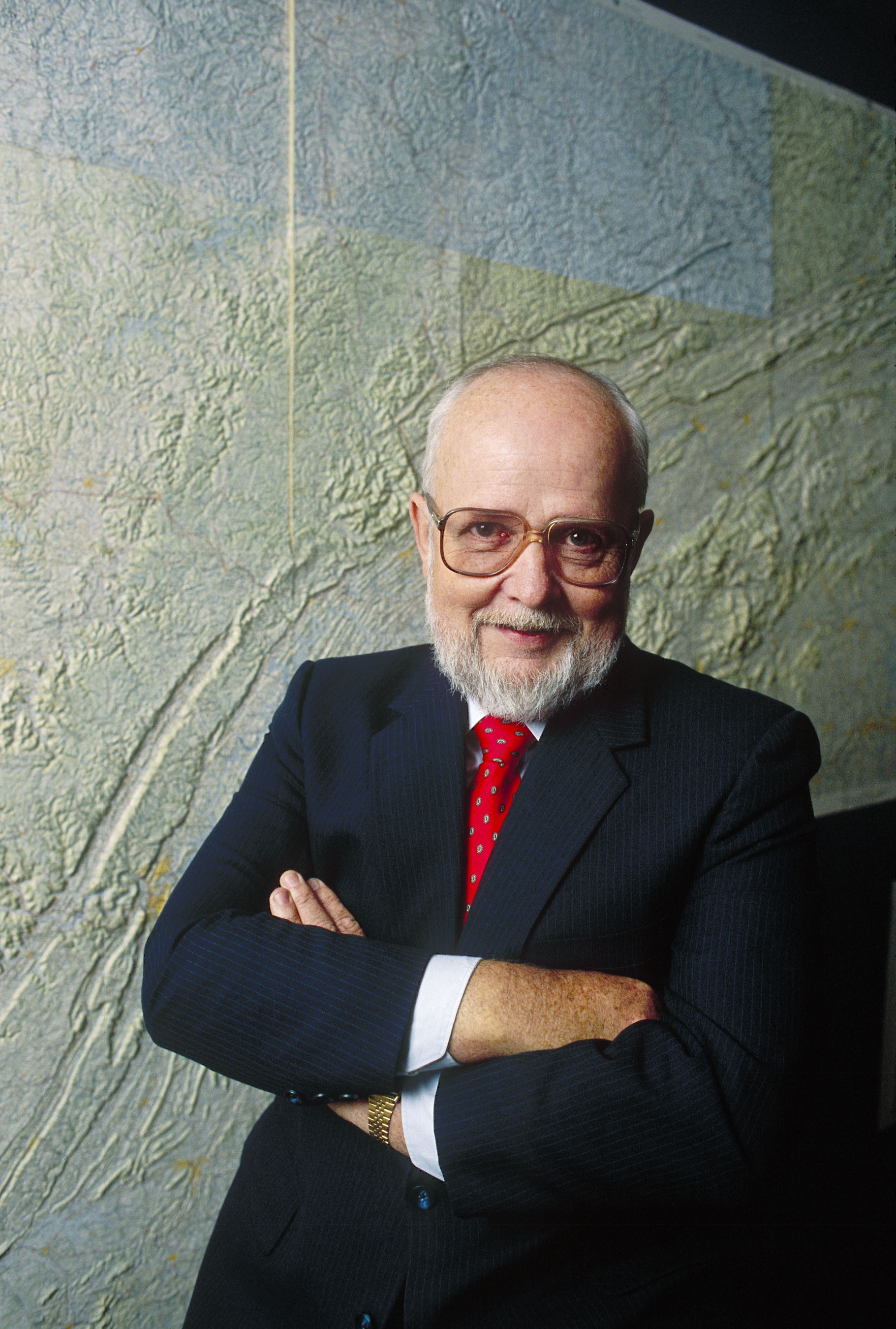 If there ever was a person for whom the phrase “A Man for All Seasons” aptly applies, it was Sam Bowers Hilliard: Academician, Historian, Mentor, Author, Journalist, Raconteur, Craftsman, Antiquarian, and yes Prankster. For 23 years (1971-1993) Hilliard demonstrated these attributes to the fullest while with the Department of Geography and Anthropology at Louisiana State University.

Born on December 21, 1930, Sam began his life as a country boy.  He was raised in Hart County which is located in the north Georgia foothill section of the southern Piedmont. Sam was destined to spend most of his last two decades there as he did his first two. This part of Georgia had been home to both his father’s and mother’s families for generations.  Sam’s middle name (Bowers) is not only his mother’s maiden name but also the name of the town where he was born, Bowersville; even today it is a small country village with a population of about 300.

After graduating from High School, Sam ventured only seven miles away for a year at Emmanuel College, a small Pentecostal Church supported college in Franklin Springs, GA. Next came four years with the Navy during the Korean War which in turn was followed by work with an Atomic Energy Installation in South Carolina. Suffice it to say that Sam, like so many before him especially after WW II, was somewhat delayed in beginning a dedicated attempt at advancing his education. Thus it was not until 1957 (when he was 26) that he began attending the University of Georgia, Athens, GA. Majoring in History, he earned both the AB (1960) and MA (1961) degrees. With this historical bent, the next stage of his graduate education was at the University of Wisconsin, Madison, WI where he concentrated on Historical Geography. During the last stages of writing his doctoral dissertation (awarded in 1966) Sam taught at the University of Wisconsin, Milwaukee after which he moved to Southern Illinois University, Carbondale, IL as an assistant professor. So by 1967, when Sam began his climb up academia’s ladder, he had been away (at least in body) from Bowersville for nearly a decade.

That decade was to stretch into nearly two and a half more (those he spent at LSU) before he returned home to the hill country of north Georgia.  In 1970, the Department of Geography and Anthropology was adding several new faculty members to an expanding program. Because Fred Kniffen, one of the founders of the department, had reached the mandatory (at the time) retirement age, one of the new hires was slated to be his replacement. Hilliard, who had just published his highly acclaimed book Hog Meat and Hoecake, was interested. He had the obligatory recommendations sent to the department and made a visit to Baton Rouge. His very successful lecture, attended by members from Home Economics and Sociology as well as the department, was entitled “Southern food habits: a frontier relic.”  That visit along with referee comments such as “perhaps the best complement I can pay him is to say that he always reminded me of Fred Kniffen” and “the combination of Sam Hilliard and Louisiana State University sounds like a marriage made in Heaven,” led to his hire at the Associate Professor level. He spent the next 23 years at LSU. As an aside it might be noted that not only did Sam join the department upon Fred Kniffen’s retirement but he himself retired at the end of the same year Professor Kniffen died. Thus, they shared many sessions together discussing a variety of topics but especially those related to the South, historical geography and agriculture.

At LSU Sam Hilliard was highly successful in all three of the mandates of all universities and especially those with flagship status: teaching, research and service. As a teacher and mentor, he was among the best: “Sam has a pedagogical style that quickly establishes rapport and opens up communication with students” and “Sam concerns himself alike with undergraduate and graduate students.” He was equally at home in courses with up to 300 students as he was with small graduate seminars. He was much in demand as a graduate advisor; at one time serving as major professor for eight graduate students and as a committee member for 27 others, many of them in other departments. Sam supervised 12 doctoral and five master’s students while with the department. Indeed, his student related activities were recognized with an Alumni Professorship (1984), a professorship that rewards teaching effectiveness.

During his tenure at LSU, Sam Hilliard served the department, university and his profession in many ways in addition to teaching. A few of the ways include service as Chair of the Department (1975-1978), Director of the School of Geosciences, and Chair of the university’s Athletic Council (no simple task, to be sure). In addition he was on a number of other university committees such as the Committee on Faculty Awards and the Graduate Council. Outside the university Sam served on the Nominating Committee of the Association of American Geographers (AAG), as President of the Historical Geography Specialty Group of the AAG, and as member of the Executive Committee of the Agricultural History Society, among others. He was also involved internationally and once hosted the International Fraternity of Historical Geographers in Baton Rouge and New Orleans. Such activities led to his receipt of a Lifetime Achievement Award from the Southeastern Division of the AAG.

Hilliard’s research led to six books and dozens of journal articles. In addition to his Hog Meat and Hoecake mentioned above, he wrote such articles as “Indian Land Cessions…”, “The Tide Water Rice Plantation…”, The Southern Antebellum Plantation” and “Headright Grants and Surveying in Northeast Georgia,”  all of which give an indication of his topical and regional interests. He was also the editor of one of the Geoscience and Man (School of Geosciences, LSU) publications entitled Man in the Lower Mississippi River Valley. However, maybe the ‘labor of love’ for Sam was his contribution to the work that has been called the “offspring of a marriage of history to geography.” It is the National Geographic Society’s Historical Atlas of the United States published in 1988.  The project had three principal consultants including Hilliard, who, during the four years he devoted to it, made 25 trips to Washington D.C. He mentioned one time that he considered it a work of art and creativity. Sam was always intrigued with regional terminology and in the Atlas, for example, one finds that a heavy rainfall is variously referred to as a “goose drownder,” “toad strangler,” “clod buster,” or “Arkansas dew.” That atlas was only one of Sam’s products of ‘art and creativity.’ Another example is his Atlas of Antebellum Southern Agriculture, which, according to Bill Cooper (Boyd Professor of History), stands alone as a unique piece of research.

Sam Hilliard retired from LSU in December, 1993 and immediately moved home, i.e. to Bowersville, GA, where he lived until his death on August 5, 2011. He did not let his talent go to waste after retirement for he immediately began working on the historical geography of Hart County and soon became the official Hart County Historian. According to The Hartwell Sun (the county newspaper) Sam was “instrumental in recreating our churches and schools.” He was a major contributor to the newspaper on ‘country’ related topics and even “authored books on the rural education, churches and lifestyles of Hart County.”

How does one sum up the life of such a man as Sam Hilliard? Suffice it to say that he was indeed “A Man for All Seasons.” He was able to place food, current events, music, art, popular entertainment, travel and other aspects of life in the South in perspective. “He could, would, and loved to talk about any subject” as reported by one of his friends in Bowersville; a talent remembered well by his friends in Baton Rouge.  Sam, a country boy at heart, loved a good party and threw many of them himself.  His beer can collection was among the best, he made articulated wooden toys which he gave to his friend’s children, and the list could go on.  And above it all Sam was a devoted family man. Joyce, a registered nurse, shared his life for 56 years and the two produced two children, Steven and Joy.

In closing I would like to use the statement used as an end comment in a booklet devoted to Fred Kniffen, who Sam called friend and colleague for 23 years. It was borrowed from Mitch Albom’s book “Tuesdays with Morrie.”  I believe that all of Sam’s friends and acquaintances would agree that the aphorism that “Death ends a life but not a relationship” applies equally well to Sam Hilliard.