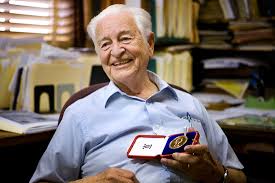 Harley Jesse “Jess” Walker, 93, passed away May 30, 2015 from complications following heart surgery. Like many in U.S. geography’s first and second generations, Jess Walker had rural Midwestern roots. He was born July 4, 1921 in Michigan. Soon after, his family moved from Michigan to Colorado and then in 1929 to California, a few months before the stock market crash. The family lived much of the next decade in a tent encampment near Morro Bay. Jess’s father bought a boat and made a living from the sea, bartering fish for produce from inland farmers. Jess had multiple jobs during the Depression years, but managed to save enough in high school to start college at Berkeley in fall 1939.  An avid explorer of local environments, especially the coastal zone, majoring in geography was a natural outcome.  With the onset of WWII, and Jess’s childhood fascination with flying, he enlisted in the Naval flight school at the beginning of 1942. During the war he served as a Marine Corps pilot in the Pacific theatre learning coastal and Pacific island geography first hand.  After the war he returned to Berkeley to complete his undergraduate studies (BA 1947), and then his Master’s degree in geography (MA 1954). His Master’s thesis was a study of rainfall in Mexico under the direction of John Leighly, but the initial inspiration came from a trip to Mexico with Carl Sauer in the summer of 1947.

Walker’s academic career actually began before finishing his Master’s degree.  In 1950 on the recommendation of Wilbur Zelinsky (then at the University of Georgia) he was hired as Assistant Professor to help set up a geography program at Georgia State College in Atlanta. He was preceded the year before by his fellow Berkeley student, Reese Walker (no relation), also a Leighly advisee and participant in the 1947 trip to Mexico.  The two Walkers quickly laid the foundations for the department. In 1956 Jess Walker was named Chair. During his tenure at Georgia State, Walker also managed to do course work and fieldwork (in the Arctic) for his Ph.D. at Louisiana State University (“The changing nature of man’s quest for food and water as related to snow, ice and permafrost in the American Arctic”) under the direction of Fred Kniffen.  He spent much of 1955-57 commuting by bus between Baton Rouge and Atlanta. At Georgia State he taught courses in anthropology and geology as well as geography and built up the library’s holdings in geography. Walker oversaw the hiring of several additional geographers including fellow Berkeley student Campbell Pennington.  Walker spent the academic year 1959-60 in Washington, DC with the Office of Naval Research under the direction of Evelyn Pruitt.  In subsequent years, the ONR would be an important funding source for LSU geographers doing coastal studies and foreign area fieldwork.  Receiving his PhD degree in 1960, Walker was invited by Kniffen and Russell to join the LSU department as an assistant professor.  In 1962 he became the departmental chair. The 1960s were boom times in America, and academia was no exception.  The Department of Geography & Anthropology under Walker’s chairship (1962-1969) enjoyed healthy growth, doubling the number of faculty from five to 11.  During this decade new geography faculty hires included: Charles “Fritz” Gritzner, Milton Newton, Robert Muller, Jonathan Sauer, Fred Simoons, and Donald Vermeer.  Walker’s eclectic interests and abilities allowed him to teach a variety of courses, including climatology, geomorphology, human-environment courses, and special offerings on his Arctic and coastal research topics. Walker ended the decade with another ONR assignment, this time in London where he and his family spent the academic year.

During the decade of the 1970s Walker continued to help build the department having expanded the physical geography program in the directions of climatology and biogeography with new appointments and visiting scholars.  During the late 1960s through the 1970s Walker helped bring in a series of visiting scholars for periods of a month to a year. These visitors included: H. Aschmann, D. Brunsden, E.E. Evans, H.G. Gierloff-Emden, D.B. Prior, C.O. Sauer, W.L. Thomas, J.K. Wright, and E. Yatsu. Similarly Walker was integrally involved in hosting symposia that resulted in published volumes in the School of Geoscience’s Geoscience and Man publication series. Walker also oversaw the creation of a number of new courses focused on coastal topics.  Led by Walker, the LSU department became a major geographic center of coastal research and teaching.  In 1977 Walker was named Boyd Professor, LSU’s highest academic honor and rank, thus joining Russell, Kniffen and Robert West (all with Berkeley degrees) becoming the fourth LSU geographer to achieve this status.

Walker’s formal teaching career ended in 1984 with his retirement, but he continued to oversee theses and dissertations until 1990.  With retirement Walker may have been relieved of his teaching and administrative duties, but if anything, the pace of his research and service only accelerated.  A world traveler with an impressive roster of places visited and conferences attended, in “retirement” Walker served as one of U.S. geography’s most seasoned and effective informal ambassadors abroad.  Accordingly, he was awarded a number of honors, including an honorary doctorate from Uppsala, the Patron’s Medal of the RGS, Distinguished Career Award from the AAG, and recognition from a number of national geographic societies on several continents. He was a Fellow of various scientific organizations including the American Association for the Advancement of Science. His publications (books, articles, chapters) reflected his main research interests.  Perhaps foremost are the Arctic topics, especially on his Colville River delta site (Alaska’s North Slope), his workshop during multiple field seasons.  But Walker also did field work in tropical environments, including studies of Mauritius. More broadly, coastal places and processes were the objects of Walker’s global investigations, with special attention to East Asia (China and Japan) and Italy. As emeritus professor (thirty plus active years in this role!), when not traveling, or conferring with colleagues in the field, or attending conferences, he was certain to be in his carefully curated office or laboratory writing up yet more material or researching new projects.  During these years he also contributed to the history of geomorphology, with various publications including a large co-edited volume on The Evolution of Geomorphology (1993).  Similarly he wrote memoriam pieces for the Annals of the AAG on Fred Kniffen and Evelyn Pruitt and the entry for Richard J. Russell in Geographers: Bibliographical Studies.

H. “Jess” Walker’s time and tenure at LSU, some sixty years – from start of his doctoral studies in the mid-1950s to the present, spans much of the department’s history. When he entered only the three Sauerians (Russell, Kniffen, West) and two of their students (William McIntire and John Vann) were on the geography staff. Walker not only oversaw the expansion and “diversification” of the faculty and program, but also subsequently helped keep the founding visions and directions in focus and on course. Perhaps more than anything, Jess Walker stood out for his fidelity to the department, university, and discipline. But at the same time, he was very much his own person, not someone to be easily emulated.  Perhaps more than most, he was a product of his times. He epitomized what Tom Brokaw had in mind when he coined the term “The Greatest Generation.”  From Depression Era deprivation, to daring service in WWII, to post-war boom and building, the trajectory was clear – upward and onward.  In Jess Walker’s case, and to most of all who knew him, his was a generous run -- an arc bent only slightly with time -- that still possesses some momentum.  He is survived by his wife Rita, sister Lois, their three daughters Winona, Angie and Tia, nine grandchildren, and four great grandchildren.