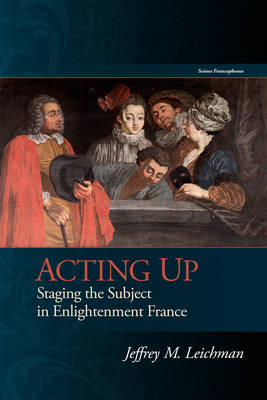 Jeffrey M. Leichman is the Jacques Arnaud Associate Professor and Director of Graduate Studies in the Department of French Studies at Louisiana State University. His research focuses on theatrical culture from the early modern period through the present, with forthcoming publications on representations of Native Americans on the eighteenth-century French stage, the diachronic dialogue between Denis Diderot and Jacques Rivette, pedagogical strategies for teaching Corneille alongside Césaire, and the historiographic potential of immersive digital simulations. Professor Leichman is the principal investigator for the VESPACE (Virtual Early modern Spectacles and Publics, Active and Collaborative Environment) project, an NEH-funded digital humanities initiative that brings together scholars in literature, history, theatre, and computer science from the US and Europe in an effort to create a playable virtual reality model of an eighteenth-century Fair theatre. Professor Leichman is also co-editor of a collection of essays exploring theatre and performance in and of the eighteenth-century French Antillean colonies, forthcoming in 2020, and the author of the monograph Acting Up: Staging the Subject in Enlightenment France (Bucknell UP, 2016). In 2018-2019, Professor Leichman was a Fellow in residence at the Institut d’Etudes Avancées de Nantes.

As a teacher, Professor Leichman has developed engaging and inclusive curricular offerings for undergraduates at all levels, including courses on identity and difference in eighteenth-century French literature; theatrical, operatic, and cinematic adaptations of Manon Lescaut; comedy from the neoclassical age to the present; selfhood in contemporary French drama; and advanced oral communication for French majors, amongst others. Graduate seminars in French and comparative literature have focused on theatre and Enlightenment culture, stage performance in world cinema, and the history and practice of digital humanities. Professor Leichman previously taught at Sarah Lawrence College and the University of California, Irvine.