How a pandemic, an assignment deadline and a community’s generosity provided much more than lunch for under-appreciated local healthcare heroes

Originally, the assignment was to address a social work problem on a micro, mezzo and macro level.

As their program transitioned to remote learning format courtesy of COVID,  the project required the use of social media—rather than in-person interaction—for completion.

However, this group was drawn to support a population so underserved, it did not even make the list. And, by the end of the month, they had achieved much more than a class presentation. They improved the morale of often-overlooked, local healthcare professionals.

Indirectly Improving the Care of the Elderly 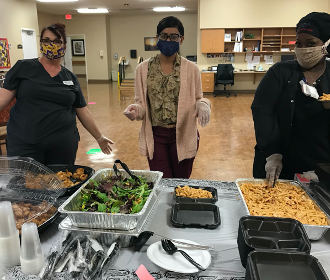 Prior to the pandemic, the cohort had taken an unconventional approach to the original assignment.

Rather than focusing on people who benefit from social work, “We were more interested in social workers themselves because [there is] a high burnout rate,” Rodriguez explains.

They planned to create a walking, support group around the LSU Lakes for social workers to destress and process with peers, who could relate to their issues, problem solve and validate their feelings.

When the project’s focus narrowed to helping vulnerable populations affected by coronavirus, the group’s first thought was to create an activity for nursing home residents.

“It’s really hard to get to [the residents], and we couldn’t make a group activity because they’re on lockdown in their rooms,” says Rodriguez.

“That’s when we remembered our first topic, and we realized helping nursing home caregivers avoid burn out indirectly affects the elderly.”

Based on the success of social media campaigns providing meals to other frontline professionals, the group mounted #FeedItForward, a series of posts encouraging the public to use an app to donate funds to feed nursing home workers.

“It was not as easy as we thought,” Rodriguez reports. “A lot of people want to help; but, they didn’t want to create an account.”

Reaching Out to Restaurants

With only four days remaining until their assignment deadline, the classmates—now scattered between North Carolina and South Louisiana—convened virtually to brainstorm.

Their latest plan involved contacting restaurants to solicit donations to feed both day- and night-shift staffs of local nursing homes.

“We were hesitant to reach out the restaurants,”  says Rodriguez. “We felt it was almost insensitive because we knew they were struggling.”

But, with no other apparent options, the group divided up a restaurant list, generated a script (which was quickly abandoned) and moved forward.

Since it was the end of the month, many restaurants had already given what they could to hospitals, furloughed workers or school lunch replacement programs.

But, ultimately, the grad students acquired enough food from eight local restaurants to serve meals to 265 frontline nursing care providers in Baton Rouge, Gonzales and Lafayette. In addition, they collected cards with words of inspiration for nursing home residents.

When the Whole Community is Struggling, People Still Want to Help 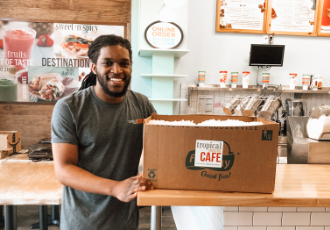 Tropical Smoothie Café was among the eight local restaurants that donated food or beverages to the project.

More than just making the deadline and the grade, this project yielded a positive, powerful experience in the midst of tragedy.

“It gave us chills to see restaurants who were struggling so badly give so selflessly to the nursing home caregivers who were giving so selflessly,” Rodriguez says.

“When the whole community is struggling, people still want to help,” she says. “How you treat people when you’re struggling shows how you really are.”

And, even though Hannah Breaux is the only member who intends to pursue a career in geriatrics, the time the group members spent with nursing home caregivers provided interesting insights.

Since nursing home professionals often provide medical and palliative care at the bedside, their credentials and stress level are similar to those of hospital staffs.

Additionally, because staff members care for these patients daily, they frequently develop special relationships with residents and their families.

“When a patient is lost to illness—as has been the case frequently with COVID—there’s a lot of grieving,” Rodriguez says. “It breaks my heart because a lot times [these healthcare providers] get overlooked, and they really are helping as much as others."

When class presentations began, Rodriguez and her colleagues made another discovery.

“We were the only ones to do a physical campaign—maybe that’s why we were so stressed out,” she now says with a laugh.

“Other campaign were theoretical,” she continues. “It would have been great to see everyone’s project come to life.”

*For more information about these amazing MSW students, visit the Meet the Team sidebar.

Special Thanks to Our Local Restaurants Donors 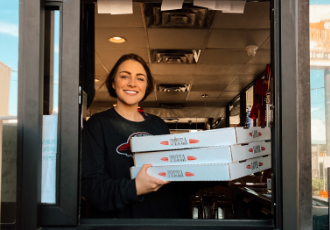 Red Zeppelin Pizza and other local business delivered hope and appreciation to an often overlooked population of healthcare professionals.

The Challenge of Change

Within less than two months, Katelyn Rodriguez and her classmates saw three of their best original ideas—the support group for social workers, activities for the elderly and crowdfunding for caregiver meals—fall by the wayside.

So, they were concerned about how they would fare on a final project that didn’t go as planned.

Watching from the sidelines, Traci Lilley, MSW, had a different perspective. Lilley is not only the course instructor, she is the associate director of LSU School of Social Work as well as the director of field education.

This  first-year MSW class explores the cornerstones of social change including:

However, while the steps seem orderly and even obvious, Lilley admits, “Change is a fluid process.”

So, having the six building blocks alone is not enough.

“Everything [this group] experienced is what we want them to learn,”  explains the instructor.  “[Progress] not a straight line, and failure is part of the process. They had to adapt.”

As the options narrowed, “[The group] found a project they are passionate about,” she says. “When you’re passionate, people tend to listen more and want to help.”

Hannah Breaux plans to work with older adults/geriatrics in a hospital setting as well as working with the homeless.

Haley Boyd is interested in working with patients and families in hospital settings.

Shendrekia Cayette plans to advocate for survivors of domestic violence and sexual assault.