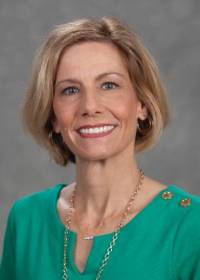 Calderon is a resident of Baton Rouge but commutes to her current job in Hammond, LA. She took some time to discuss a little bit about her career, talk about her time at LSU and give some advice below.

Her LSU CHSE family was very proud when Calderon was named dean of the College of Education at Southeastern Louisiana University in 2017.

Now, Calderon is the Dean of the College of Education at Southeastern Louisiana University, the third largest university in Louisiana. She also serves as the president of the Louisiana Association of Colleges for Teacher Education, an organization of deans and directors from all of Louisiana's public and private universities.

In addition, Calderon is a 2019-2020 Deans for Impact Fellow. At the time of her fellowship she was one of only four deans from Louisiana who held this distinction. Calderon credits both her graduate experiences and work experiences at LSU for grooming her to be chosen for this honor.

As an undergraduate, Calderon pledged Phi Mu Sorority, and recalls many fond memories of all the fun that came with living in the Phi Mu house. She was a French Education major and thoroughly enjoyed her French classes and education classes as she studied to become a French teacher. Calderon remembers frequently meeting her friends in between classes by a tree in the Quad outside Prescott Hall where the French Department was located. She has fond memories of this as well as she recalls the weather always seeming gorgeous in the LSU Quad.

“The LSU College of Education (as it was called then) has an outstanding faculty - specifically foreign language education faculty, Dr. Robert Lafayette and Dr. Denise Egea. They were influential in my initial teacher education and instrumental in where I worked and in the pursuit of  graduate degrees.”

Calderon also notes opportunities given to her by the Department of French and Francophone Studies to help her excel in her language proficiency. At the age of 22, she was confident and prepared to teach French to high school students, some of whom were five years her junior.

“Work hard, play hard, and surround yourself with positive faculty advisers and peers who will only push you toward success and achieving your dream. From the time I was in high school, I knew I would pursue a doctoral degree and teach preservice teachers. Because of my experiences at LSU, the faculty, my peers, and supportive parents (both LSU alumni), I did just that. Geaux Tigers!”

Calderon encourages undergraduate students to find a way to be involved in campus life. LSU has so much to offer to make the college experience more intimate. There are Greek organizations, departmental clubs, faith-based organizations, honors fraternities, and so much more. The connections and friendships students make in these various groups will last a lifetime.