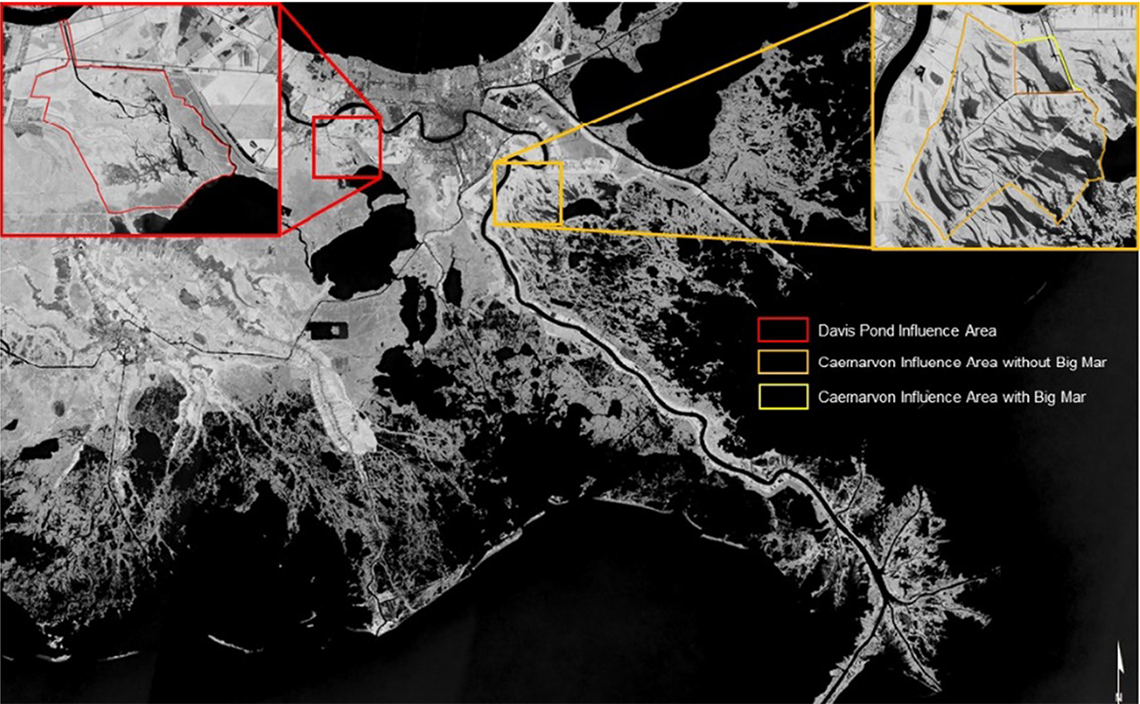 The analysis looked at two existing freshwater diversions on Louisiana's coastline, the Davis Pond Diversion and the Caernarvon Diversion

BATON ROUGE -- College the Coast & Environment researchers just gave more evidence to support the large-scale Mississippi River sediment diversions currently being planned for the Louisiana coast, when they analyzed the state of two existing freshwater diversions already in place. Their results, published recently in the journal Ecological Engineering, show one site has formed a significant amount of land over the past 17 years.

The study, conducted by John White, a professor in the Department of Oceanography & Coastal Sciences, or DOCS, John Day, a professor emeritus of DOCS and Brady Couvillion of the US Geological Survey, looked at the Davis Pond Freshwater Diversion, which is situated on the west bank of the Mississippi, upstream from New Orleans, and the Caernarvon Diversion, which is downriver from New Orleans and on the river’s east bank.

Researchers found the Davis Pond Freshwater Diversion, which was opened in 2002, to be a “dynamic environment which has been experiencing dramatic change” over the years. In the time since the diversion was opened, a new fan-shaped build up of sediment, known as a crevasse splay deposit, has opened up at the mouth of the inflow channel. Mouth bar deposits and fringe wetlands have begun to fill in previously opened ponds.

The study estimates that, in the 17 years since the diversion was opened, area land has increased somewhere between 2 and 4.8 square kilometers (that’s between 1.25 and 3 square miles), the majority of that has been in the last decade or so. Not only that, a decadal soil sampling study conducted in 2007 and 2018 showed a doubling in bulk density of wetland soils in over half the wetland, which can be attributed to the deposition of river sediment.

The Caernarvon Diversion, on the other hand, shows no meaningful detectable changes in the amount of land present in the area. This finding is in itself significant, however, as it refutes an earlier study that both diversion areas lost land after the diversion was opened.

The Need for Better Wetland Data on Louisiana's Coast

Diversions at both sites were created not to build land, but as attempts to combat saltwater intrusion created by rising sea levels. Although they were not designed to capture sediment, both sites provide instructive examples for how the results of freshwater diversions may look, and also the best way to monitor the success of a given project.

White said that the methodologies used to gather data are significant for the state’s planned sediment diversions. Wetlands can prove difficult to measure using standard remote sensing techniques, he said, because the rise and subsequent retreat of flood waters make it difficult to determine where land is building, depending on the changing water level.

“Our study in Davis Pond used appropriate remote sensing tools and combined them with over 140 measurements on the soils and plants to provide ground-truthing and certainty for modeling. If a river diversion is affecting the soil, you need to measure the soil, before and after, to fully understand how the river diversion is affecting the land,” he said.

Moving forward, he continued, “Louisiana needs a better database of wetland spatial soil data describing the entire system, so that as things change, we can understand what is actually causing these changes and thereby design better systems which represent value for money for the taxpayer. The state has a great system, Coastwide Reference Monitoring System (CRMS) which is focused on the coastline, but they will need additional sampling efforts aligned to the sediment diversions to fully understand the impact and progress of these restoration projects.”