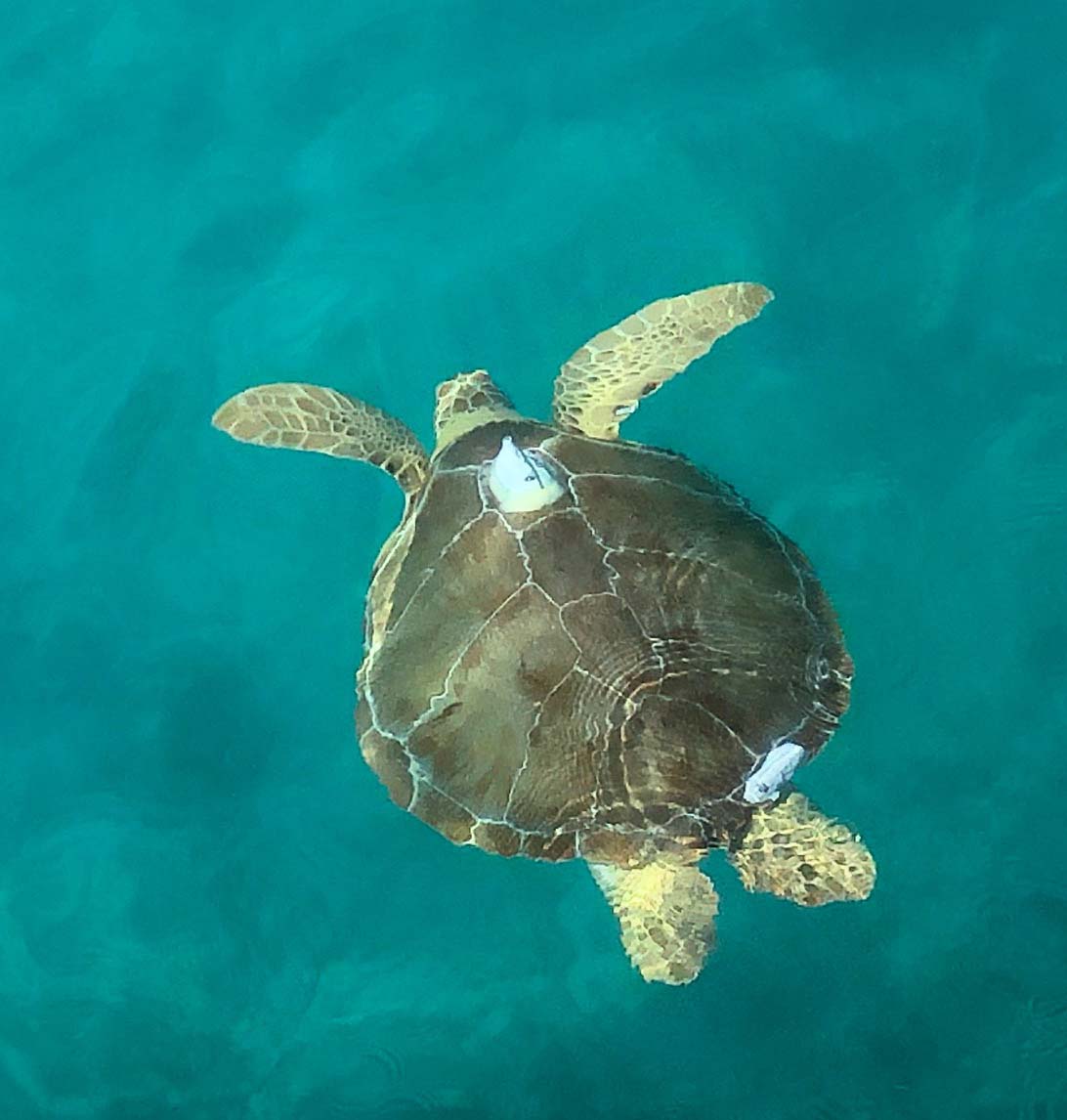 A green turtle swims with a tracker on its shell.

The Gulf of Mexico is an unusually bio-diverse place, boasting over 15,000 species in its semi-enclosed sea. Historically, however, very few studies had been conducted on the Gulf’s marine life, a knowledge gap drawn into sharp relief by the lack of baseline data in the aftermath of the Deepwater Horizon oil spill in 2010.

Now a portion of that gap has been filled, thanks to the release of the largest ever assessment of marine turtle diving behavior in the Gulf of Mexico. The study, funded by US Geological survey and conducted by LSU’s Kelsey Roberts, a new post-doctoral researcher with the Department of Oceanography and Coastal Sciences, and Kristen Hart, the principal investigator and a USGS ecologist, was published in the journal Remote Sensing. The information it provides will allow researchers to better measure the population and behavior of these crucial indicator species.

“This unique dataset is a significant step in furthering our understanding of the behavior of these animals within the Gulf of Mexico ecosystem,” said Kam-Biu Liu, the head of the Department of Oceanography & Coastal Sciences.

Currently, marine turtle populations and movements are tracked using aerial surveys, meaning turtles are counted when they appear close to the surface of the water. However, not much was known about their diving habits. Scientists weren’t sure what environmental and oceanographic conditions brought turtles to the surface, and what sent them diving down deep in the water column, or how much time they spent in either location.

Roberts and team utilized over a decade of satellite tracking information on 136 Loggerhead, Kemp’s ridley, and green turtles. They wanted to measure the amount of time turtles spent at different ocean depths, focusing on the turtles’ time spent within two meters of the surface, where the animals would be visible during an aerial survey. The team coupled this information with data on eleven environmental and oceanographic factors, including salinity, sea surface temperature, ocean fronts, distance to shore, as well as others, in an attempt to determine what conditions were most likely to bring turtles up to the surface.

“We have estimated a critical variable for interpreting sea turtle sightings in aerial surveys. Knowing how much time each species spends at the surface and where they are available to be counted has always been assumed but not quantified. We hope this information helps to obtain more accurate abundance and density estimates of marine turtles in the Gulf,” Roberts said.

Right now, turtles and other marine wildlife face a barrage of hazards in the Gulf of Mexico, from fishing nets to boat collisions to increasingly strong hurricanes. A better understanding of their population levels and migration patterns will hopefully lead to more effective management structures in the Gulf—perhaps no-wake zones in areas known to have favorable surfacing conditions, or requiring fishing nets to have turtle hatches built in.

The study provides “provides important information that can be used to help not only guide further population monitoring of marine turtles, but future decision-making about wildlife management in the Gulf,” said Dr. Liu.