Sea Level Rise Sentinels: Documenting Biodiversity in the Rising Waters of the Gulf of Mexico 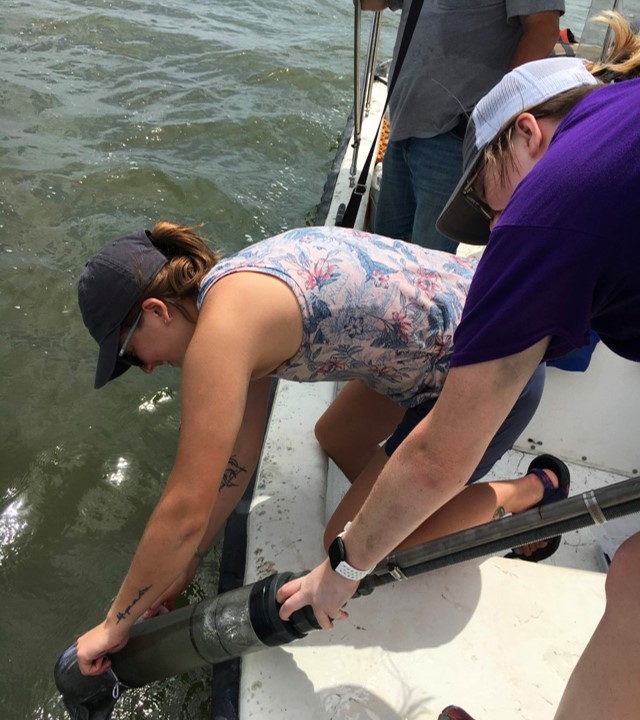 LSU researchers retrieve a core sample from the waters of the Gulf of Mexico.

BATON ROUGE – LSU oceanographer Cassandra Glaspie offers a stark fact when talking about sea level rise and the Louisiana coastline: the combination of rising water and sinking land means that the state’s coast is about 50 to 100 years ahead of similar areas around the globe.

“We are the sea level rise sentinels,” said Glaspie, who is an assistant professor in the LSU Department of Oceanography & Coastal Sciences, or DOCS.

Glaspie and a team of researchers were awarded a five-year, $1.75 million grant to document what is happening to estuarine ecosystems on Louisiana’s coastline. Louisiana will establish a new Marine Biodiversity Observation Network, or MBON, focusing on highly productive and diverse estuarine ecosystems that can serve as sea level rise sentinels. Their work can help other areas around the world that are also coping with the effects of climate change.

The team, which includes fellow DOCS faculty Professor Eurico D’Sa and Assistant Professor Michael Dance, as well as members from Louisiana Universities Marine Consortium and other institutions, will deploy a mix of measures—some widely used, some relatively new—to monitor the biodiversity of the coastal estuary. They will work with scientists from the other sites to build a framework for tracking and standardizing marine biodiversity data, establishing a baseline in the face of sea level rise and a changing climate.

“Estuarine ecosystems, like those on the Louisiana coastline, are incredibly important locations of marine biodiversity. Monitoring the health of the ecosystem in the face of sea level rise and global climate change will provide us with the tools we need to plan for the future,” said Kam-Biu Liu, the George W. Barineau III Professor and departmental chair of DOCS.

The nature of the Louisiana coastline makes the task a little more challenging. The estuarine habitat is formed by murky, sediment-rich freshwater mixing with the salty water of the Gulf of Mexico, creating a highly productive environment with extremely low visibility. Standard monitoring techniques are not always sufficient.

“You can’t just pop a camera down there and get a clear picture,” Glaspie said.

While satellite imagery will be used to try to link water color to conditions such as the presence of phytoplankton, the scientists will otherwise work around the turbidity of the water by gathering data using a variety of methods such as acoustic monitoring and acoustic telemetry, a way of using sound waves to monitor fish and other organisms.

This array of techniques will also include the use of environmental DNA, also known as eDNA, a relatively new technique where traces of DNA left by organisms as they pass through the environment, in this case, the water, are collected.  LSU doctoral candidate Jillian Tupitza will be analyzing water samples in order to identify the types of eDNA discovered, with each sample providing a snapshot that paints a larger picture over time.

Louisiana’s MBON site will also be collecting information from another source: the historically underserved residents of communities experiencing land loss. Through a partnership with the New Orleans non-profit organization Imagine Waterworks, the field work research process will be open to members of those communities and the grant will even compensate them for their time. The goal is to incorporate more traditional ecological knowledge when developing a baseline of what the ecosystem looked like.

“The people who have lived in this area and are deeply rooted. They really do know what the system used to look like,” Glaspie said.

Although it is a national project, the data gathered will serve to benefit a variety of statewide agencies, including the Coastal Protection and Restoration Agency, which may incorporate some the techniques developed into its next Coastal Master Plan.

This grant was awarded by the National Oceanographic Partnership Program, NOAA and partner agencies, including NASA, the Bureau of Ocean Energy Management, and the Office of Naval Research.