Purple, GREEN, and Gold: One LSU Alum’s Pursuit of an Eco-Friendly Mardi Gras 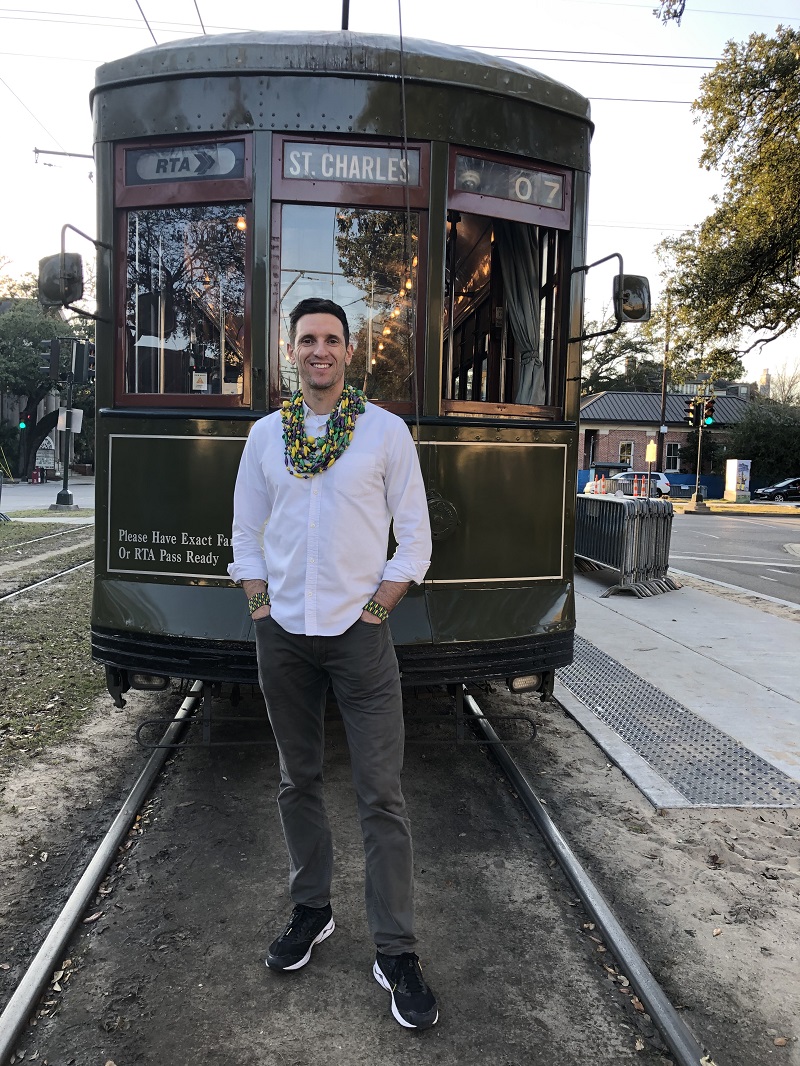 LSU alumnus Kevin Fitzwilliam is relentless in the pursuit of a “greener” Mardi Gras. While Fat Tuesday has always been associated with excess—and excess trash—this environmental sciences graduate has built a business around eliminating plastic waste from this time-honored celebration and lifting Ugandan women out of poverty in the process.

“I’m from New Orleans, and I love Mardi Gras, but I detest the waste associated with Mardi Gras. In 2016, I started researching alternatives to mass-produced plastic beads. Just to play one small role in chipping away at that problem,” Fitzwilliam said.

In 2016, Fitzwilliam founded Atlas Handmade Beads, a New Orleans-based small business that sells “upcycled” jewelry, including Mardi Gras beads, that is handmade from repurposed, biodegradable magazine paper. He hopes that by producing something unique, artistic, and environmentally conscientious, people will treasure their beads rather than throw them away.

“The point is to preserve all the things we love about Mardi Gras: second lining, socializing, dancing, costuming, and to just block out all of the things that we don’t—which is this plethora of waste that is choking the storm drains, choking the city, and giving the city a bad image,” he said.

In addition to addressing environmental concerns, he wants his business to be socially conscientious, both locally and abroad. He collaborates with Outreach Uganda and Project Lydia to produce the beads. These nonprofits help Ugandan women who make paper beads as a secondary source of income. Fitzwilliam says this provides them with extra finances that allow them to do things like take business skills training classes offered through the nonprofits and save up for a down payment on a home. Often, it also means their children can go to school for longer before having to enter the workforce. And, he hired local artist Cat Landrum of 2nd Story Creative to design handmade Mardi Gras tags for the beads that let people know about the origin of their catch. He believes that everyone who is truly dedicated to sustainability should promote each other, and he does so via featuring other leaders in sustainability on the Atlas Beads Facebook page.

Born and raised in Kenner, Louisiana, a suburb of New Orleans, Fitzwilliam has always been passionate about his culture and environment. In 2006, he earned a master’s in environmental planning and management from what is now LSU’s College of the Coast & Environment.

“Everything that I studied prepared me for having a mindset and a background on a variety of environmental topics that, on some level or another, I have been involved with,” he said. “My interest is in all aspects of the environment.”

While LSU provided him with a deeper understanding of environmental stewardship and sustainability, that knowledge, combined with his zeal, gave him opportunities to explore a diverse range of environmentally focused jobs. In 2018, he was one of 10 people nationwide named a fellow with Environmental Entrepreneurs, a national, nonpartisan economic and environmental advocacy group. In addition to running Atlas Beads, he works for the environmental consulting and engineering services company APTIM as a training and development specialist for Entergy New Orleans’ Energy Smart Program, and is one of three teachers collaborating on the first Certificate in Sustainability offered by the University of New Orleans.