The southernmost port in Louisiana is a key place for the U.S. energy industry, but—as evidenced by Hurricane Ida—also one of the most vulnerable places in the nation. Port Fourchon in Lafourche Parish serves 90% of the Gulf of Mexico’s deepwater oil and gas activities, which is why the U.S. Naval Research Laboratory has invested $25 million in LSU to create a digital dome protecting Port Fourchon and the Louisiana Offshore Oil Port, the nation’s only offshore deepwater port, from cybersecurity threats. More than 1.5 million barrels of crude oil are transported by pipelines through the port per day and about 1,200 trucks travel in and out of the port as well each day. 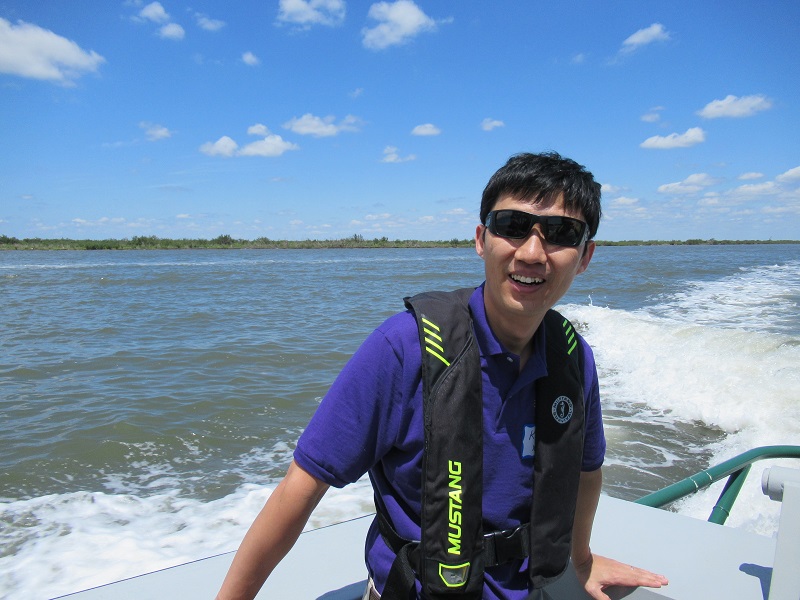 Kevin Xu, the James P. Morgan Distinguished Professor in the Department of Oceanography & Coastal Sciences in the LSU College of the Coast & Environment, is an expert in developing complex computer models that can simulate and forecast how sediment moves and alters the coast, which is critical for managing coastal land loss.

A long, thin strip of sandy beach stretches along the southern perimeter of the port, buffering it from the northern Gulf of Mexico and the threat of hurricanes, storm surge, and flooding. However, every year, the shoreline retreats by about 30 to 50 feet, creeping closer to the port, which houses more than 250 companies. The beach that lies to the south of Port Fourchon loses more land each year from sea level rise, erosion, and subsidence, or sinking, than any other place in the U.S.

“I would say land loss is one of the greatest threats to the port and southern Louisiana,” said LSU Coastal Studies Institute Interim Director Kevin Xu, who is also the James P. Morgan Distinguished Professor in the Department of Oceanography & Coastal Sciences in the LSU College of the Coast & Environment.

Dredging, or digging up, sand and sediment from the sea floor and sand bars and transporting it to rebuild and reinforce beaches, such as the one that protects Port Fourchon, as well as sand dunes, barrier islands, and marshes, is one of the main strategies used to combat coastal land loss in Louisiana. However, it is a costly endeavor. For example, the state spent more than $70 million to dredge and transport 3.3 million cubic yards of sand by barge and pumped it through a pipeline to reinforce the Caminada Headland, another undeveloped beach significantly impacted by erosion, that also protects Port Fourchon from storms.

The sediment budget, or the amount of sand and sediment available for large-scale dredging projects like this, is finite. Additionally, hurricanes can displace sand and sediment, which makes dredging and renourishment projects even more challenging. That’s why Xu’s expertise in computationally modelling sediment transport is vital.

“The efforts by LSU are of great importance to anyone involved in determining how best to use dredged sediments in the most beneficial ways for the areas protecting Port Fourchon as well as the southern Louisiana coastline in general.”

“The efforts by LSU are of great importance to anyone involved in determining how best to use dredged sediments in the most beneficial ways for the areas protecting Port Fourchon as well as the southern Louisiana coastline in general,” said Chett C. Chiasson, Greater Lafourche Port Commission executive director.

LSU faculty, including Xu and LSU College of the Coast & Environment Dean Chris D’Elia, recently met with Chiasson and other stakeholders in Port Fourchon to get an up-close look at the port and discuss ways to collaborate on coastal and environmental projects.

“The questions and engagement that resulted from this trip certainly led to an increased desire to continue working with LSU in order to address future concerns that must be taken into account as we line out a strategic, science-based process to maximize the well-intentioned use of sediment we take directly from our slips and Belle Pass. We look forward to future collaboration on sediment management as we all work toward the same goal of enhancing our coastline through successful mitigation strategies,” Chiasson said. 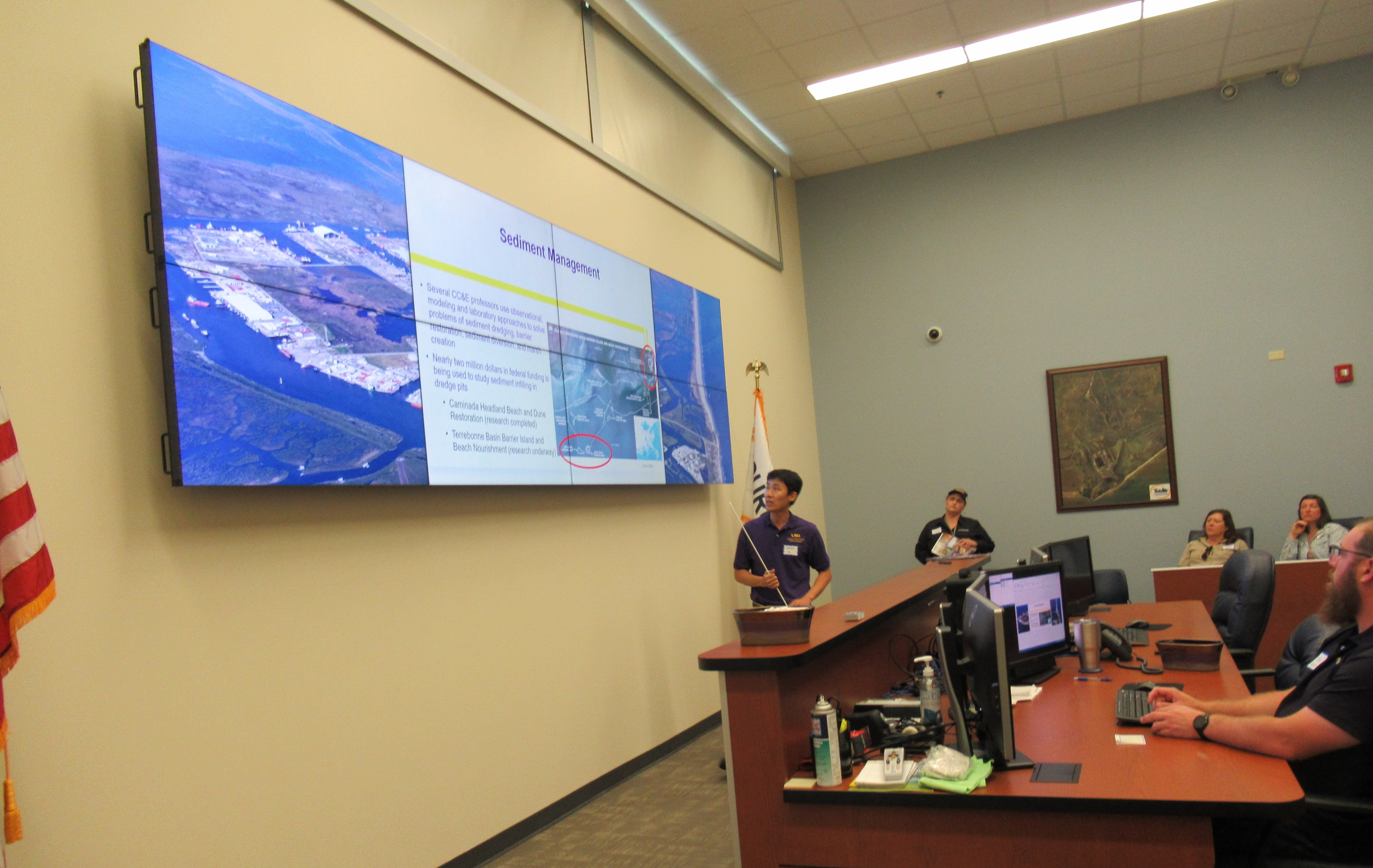 Xu is an expert in developing complex computer models that can simulate and forecast how sediment moves and alters the coast. He is part of a team of researchers who developed a 3D computer model that includes several factors—wind, water level, sediment, waves, and vegetation to simulate the large amounts of sandy sediment that was moved when Hurricane Gustav, which was one of the last hurricanes to severely impact Port Fourchon, made landfall in Louisiana in 2008. Hurricane Gustav and Port Fourchon are proxies in the computer model, which can be applied to regions around the world impacted by other hurricanes and large storms.

“Understanding the drivers and processes responsible for coastal geomorphic change is central to estimating long-term sediment budgets—an important facet of resiliency in the context of sea-level rise and a changing climate—and coastal restoration,” wrote Xu and his co-authors in a recent paper published in Coastal Engineering.

Port Fourchon and the Caminada Headland were just east of Hurricane Gustav’s track, which Xu and other experts say is the most dangerous place to be during a hurricane.

During Hurricane Gustav, sand from the beach and offshore was pushed up over the dune and deposited in the marsh by the port.

Due to the counterclockwise wind movement of hurricanes in the northern hemisphere, the strongest wind energy and force hits the areas to the east or right of the track line of a hurricane.

“The spatial pattern is very clear: tens of kilometers just east of the track line, at that location, you will experience the strongest wind, tallest waves, and biggest sediment deposition. It’s the most damaging and destructive location,” Xu said.

A few years ago, Xu and others identified this pattern in their research that compared the impacts of Hurricane Katrina to Hurricane Rita in 2005. Hurricane Katrina’s economic and environmental damages cost more than $40 billion in insured losses. In August 2005, Hurricane Katrina took a fast path straight toward the shoreline and caused intense and localized seabed disturbance along the eastern Louisiana continental shelf. About three weeks later, Hurricane Rita made landfall at an angle, which caused its impact to be widespread across the entire Louisiana continental shelf. More than 131 million tons of post-hurricane sediment was displaced when Hurricanes Katrina and Rita crossed the Louisiana coast, according to research by LSU Boyd Professor Eugene Turner and colleagues. They found displaced sediment in the wetlands that was several centimeters thick.

Xu and Samuel J. Bentley, the Billy and Ann Harrison chair in sedimentary geology and LSU vice president of research and economic development, along with six other LSU professors have been funded over the past seven years to study the dredge pits from where sand is dug and transported to rebuild dunes and beaches, such as the ones that protect Port Fourchon.

Ship Shoal is a large sandy area located off Louisiana’s south-central coast, which is estimated to have 1.2 billion cubic meters of high-quality quartz sand. Tens of millions of cubic meters of this high-quality sand has already been dredged from Ship Shoal to restore the Caminada Headland. Ship Shoal dredge pits fill back up with mud and sand under the impact from the Mississippi and Atchafalaya rivers, wind-driven currents, storm waves, and tides. LSU researchers continue to study this dynamic place that is important to coastal restoration as well as the environmental impacts of the dredge pit.

“What we found is that those dredge pits can potentially impact water quality. When you dig a big hole, the water is deep and sluggish, the bottom is very turbid, and you can potentially develop low dissolved oxygen conditions, which is called hypoxia,” Xu said.

Other LSU researchers have shown that hypoxic conditions in the Gulf of Mexico do not bode well for marine life including fish, shrimp, and crabs that fuel the seafood industry.

In addition to the ecological impact, Xu and Bentley also studied how the dredge pit affects the oil and gas pipelines. They found that the walls of the dredge pits are fairly stable. It is unlikely that the pit will collapse and affect the pipeline in the short term, especially with the 1,000-foot buffering distance set by the Bureau of Ocean & Energy Management for dredging near the pipeline.

“Our study showed that the pit wall doesn’t migrate that quickly. We found that 1,000 feet is a very conservative distance for muddy pits. Resource managers could potentially use a shorter distance and be able to dig out more sand, but additional, longer term studies in the future are needed,” Xu said.

“Research such as Dr. Xu’s increases our knowledge of how sediment moves and responds under various conditions, which helps us design effective projects and strategies to restore our coast and protect our infrastructure including Port Fourchon.”

“Research such as Dr. Xu’s increases our knowledge of how sediment moves and responds under various conditions, which helps us design effective projects and strategies to restore our coast and protect our infrastructure including Port Fourchon,” said Angelina Freeman, CPRA senior scientist and LSU alumna.

Freeman’s PhD advisor was LSU Boyd Professor Harry Roberts, who is internationally recognized for his seminal research on the Mississippi River Delta.

“I am so fortunate to have been mentored by Dr. Roberts,” she said. “My PhD at LSU provided the framework for understanding the natural processes that must be harnessed, and the application of pioneering science and engineering for effective coastal restoration management.”